Aerial view of Masada, an ancient fortification on top of the mountain. (Andrew Shiva / Wikipedia)

Israel is one country that has always been in the news for whatever reasons. But did you know that long before this Middle Eastern nation appeared on the modern world map, it had a glorious past that has now become an important part of its rich traditional history? Israel is blessed with a long list of tourist attractions, but there’s one place in particular – a world heritage site – which pulls in people from all over the world so that they can get to know more about the site that was discovered as recently as 1838. Called Masada, this tourist spot is not just of great historical significance but is also revered by Jews, whose gallant ancestors are believed to have committed mass suicide here to escape being captured by the Roman troops.

Masada in Israel: Origin of the ancient fortification

Declared a UNESCO World Heritage Site in 2001, Masada is an ancient place, situated on top of a remote, rhombus-shaped, high table-mountain, which was converted into a defence stronghold by King Herod-I between 37 and 31 BCE. Masada lies between the Judean Desert and overlooks the Dead Sea, where Herod the Great built luxurious palaces with lavish facilities for himself and reigned for 37 long years on behalf of the Roman Empire. Standing about 1500 feet above the sea level and surrounded by desert land, the entry to the grand desert palace is quite tricky; yet the Romans are said to have breached the walls and gained access into the fortress 2000-years ago, which came to be known as the Siege of Masada.

The Siege of Masada has become an event of great historical value, which was supposedly marked by the mass suicide of Jewish Zealots, where as many as 967 men, women and children gave up their lives, for they believed they would only serve God and none else.

After the fall of the Jewish Temple in 70 CE, the First Jewish-Roman War broke out as a result of anti-taxation protests that lasted from 73 to 74 CE. Roman Emperor Nero ordered notable Jewish figures to be captured, which enraged the Jewish ethnic groups, who rose in rebellion against the crown. They plundered villages and massacred their own kin, who were ready to hold peace talks with the Romans, ultimately trying to prove a point that the land was theirs and those hoping to lay hands on it or those trying to resist, would meet the same fate. Unfortunately, the Romans did manage to besiege Masada eventually, where Zealots and Sicariis had forcefully settled down with their followers, keeping the former away from entering into the strong fortress.

It is mentioned that when the troops of the Roman Empire gained entry into the Judean province and held approximately 15,000 Jewish people hostage, Eleazar Ben-Yair, the commander of the Sicariis also known as dagger-wielding rebel Jewish groups, fled with his band of followers to Masada, which was considered highly impregnable.

Little did they realize that they had been outnumbered since the Zealots had sided with the Romans to capture the rebellious freedom fighters. When the end was near and the Roman troops had made their way inside Masada, Ben-Yair decided the only other way out was to kill themselves. Since suicide is prohibited in Judaism, he ordered ten men to execute the 967 men, women and children, who were ready to lay down their lives defending the fortress and their honour. The Sicariis set their belongings and storehouses ablaze and resorted to mass suicide instead of getting captured, enslaved or killed by the Romans.

But did they actually commit suicide?

While the people of Israel revere Masada a great deal, others are divided on the happenings and claim it to be a false account. Joseph ben-Matityahu or Josephus Flavius, a Jewish commander, who sided with the Romans later, chronicled the entire Siege of Masada, which historians argue had certain inaccuracies. Not only had he exaggerated about the construction of the fortress but had also misquoted the number of deaths as found at the excavations, carried out in 1963.

Items of daily use were found at the site, which proved there was human settlement in the fortification, but the absence of mortal remains, except for three skeletons inside the palace, pointed out that there was no mass suicide or a siege or a war at all; thus implying Flavius’ accounts were false. Despite the mention of 967 people inside Masada, only 28 bodies were discovered, with three inside the palace and the rest 25 inside a cave. Had there been a war, there should have been all 967 bodies plus or minus, given the weather conditions, wild animals and scavengers, or none at all if the Romans had discarded them or carried them away.

Scholars are also of the opinion that the bodies of men found inside the cave could have been of the Roman soldiers that had died trying to fight for the fortress. While there is not enough evidence of a mass suicide at Masada, the siege and its following events remain shrouded in mystery. 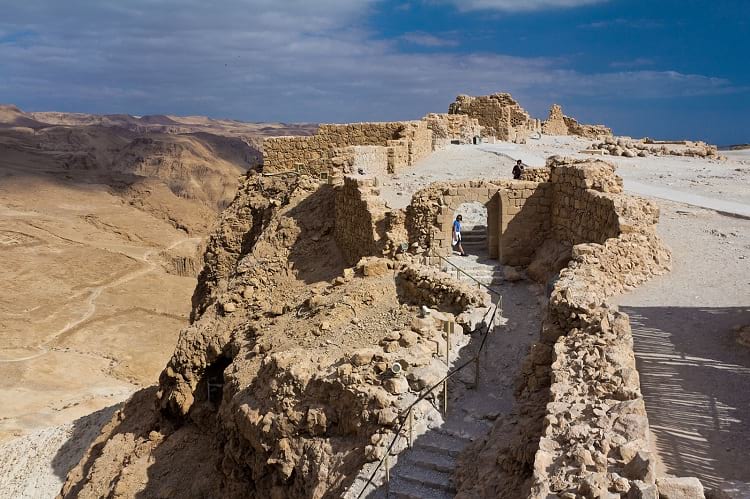 But whatever the case accounted in Jewish history, with outsiders refuting the occurrence of the events, Masada National Park, which includes a tour of the hilltop and Masada Museum remain two of the most visited destinations on tourists’ itineraries while on their travel to Israel. Mass suicide or not, Masada still stands tall to tell the tale of the splendid times it had once seen.

Enjoyed this article? Also, check out “Maunsell Forts: The Forts That Tell the Tale of WWII“.

Previous Article
Balut: A Filipino Delicacy Not Many Have the Stomach to Digest
Next Article
Why Does ‘Antimatter’ the Costliest Material to Produce Matters So Much?