Maginot Line: The Mark of French Tenacity and Resilience In great attempts it is glorious even to fail, said Cassius Longinus. The phrase best describes the predicament of France in World War 2. Defeated by Germans in a tooth and nail fight of epic proportions, France surrendered to Nazi forces of Adolf Hitler in 1940. Subjugation lasted till allied forces liberated it from German occupation in 1944. It was a long haul for a militarily deficient France, in which, a defensive wall – Maginot line, constructed along the border, played a key role. It was a saga of astute planning, unflinching courage and exemplary valour. Here is how it unfolded.

Similar to the Great Wall of China

Circa 1930. The world was passing through a phase of severe economic depression. Andre’ Maginot, Minister of war, and a disabled veteran of the First World War had a huge responsibility on his shoulders. The responsibility of saving France from Germany – the sworn enemy of France.

A defensive wall, like the great wall of china, was proposed. Wall won’t’s be as long as of china, but it would be fortified with concrete and iron, and would be strategically sited along the border. It would have an underbelly of a military base with all facilities of housing, training and fighting the enemy. The border along the friend countries would be sparsely shielded to project friendly vibes. 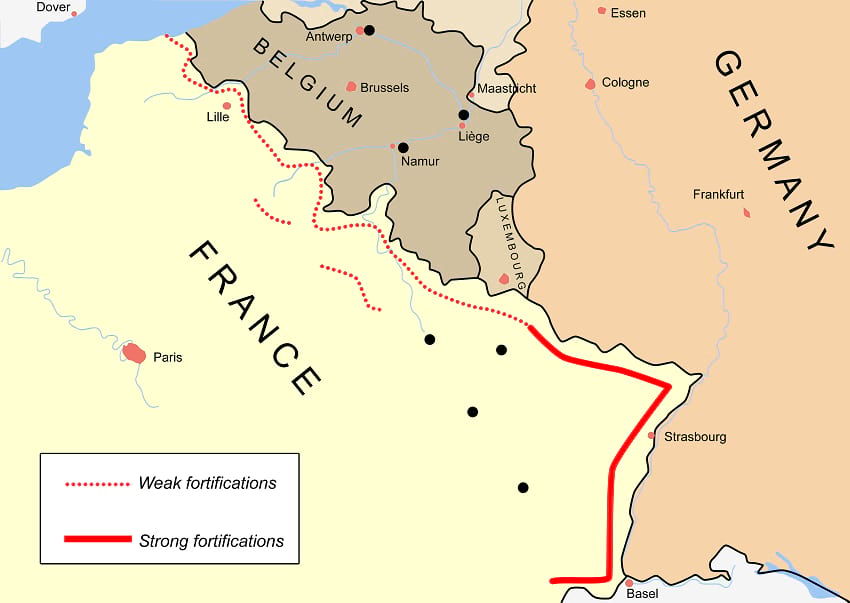 Security of army personnel was the prime objective

Fortification on the border was a tenable answer to huge loss of life and property suffered on account of repeated invasions of France since ancient times. It was time tested strategy to force the enemy to sideways where it would be trapped and neutralized. Fighting the enemy from permanent trenches, flush with all facilities to thrive, was seen by many as an overly defensive-approach inconsistent with hi-tech warfare of the future. Yet, the proposal was passed. The main reason being the safety of soldiers.

The First World War had claimed the lives of almost 1.4 million in the French army. This was a severe jolt to the French demography and implied huge shortage of future soldiers. Fixed fortification of iron and concrete, it was hoped, would instil a sense of security in soldiers and keep their morale high. Experts warned that in the highly mobile battle scenarios of future, forts would be a drag. But the Government of the day took cognizance of the alarming drop in the human population. Required number of soldiers to defend France would take more than a decade as an entire generation of youth was wiped out in the first World War. Hence the limited size of the army that existed in France had to be guarded zealously and uncompromisingly.

The budget required for a continuous, strategically porous defence, was huge. Grossly, the wall would extend from the Mediterranean Sea to the English Channel. It would cost close to 3 billion francs. Andre’ Maginot, the disabled veteran of first world War, then serving as Minister of War, got the proposal passed in the Chamber of Deputies. Hence the protective wall was named the Maginot line. Violation of French territory by the enemy, he argued, would not be allowed at any cost. And the nation, already bankrupt, okayed huge capital for defence fortification, even as the global economic recession made waves.

The wall of concrete fortification was built on the border of France with Luxembourg, Germany, Switzerland and Italy. Border with Belgium was discounted as it was a friendly nation who would call France for help if Germany invaded and the two then would fight the invader together. This, ironically, didn’t happen.

The line was dotted with armoured infantry units

By 1933, construction for the Maginot line was in full swing. Conceived as a defence-in-depth, it was a medley of subways, bunkers, munition hedges, soldier hideouts and shelters. Army pickets were so arranged that the enemy approach could be blocked at multiple levels. Many armoured kiosks could pop-up over the ground, and disappear into the basement on the command of inmate soldiers. A soldier looking through a periscope in the Fort de Sainghain on the Maginot line, 1939. (Imperial War Museum)

Facilities inside the Maginot line

Behind the primary and secondary rows of defence, was a vibrant underground military base with boarding, lodging, entertainment and training facilities. Community kitchens, Mess halls, hospitals, canteens, mortuary and almost every facility available to civilians over the ground, was made available to the soldiers underground. Electric train, diesel generators, storage for food and ammunition, air conditioning and ventilation systems added to the grandeur of the underground zone. No wonder, adequate provisions and impenetrable security of iron and concrete bunkers boosted the morale of the French army in a big way. Electrical panels and diesel generators inside Ouvrage Rochonvillers, one of the largest fort of the Maginot line. (Les Bergers des Pierres – Moselle Association) 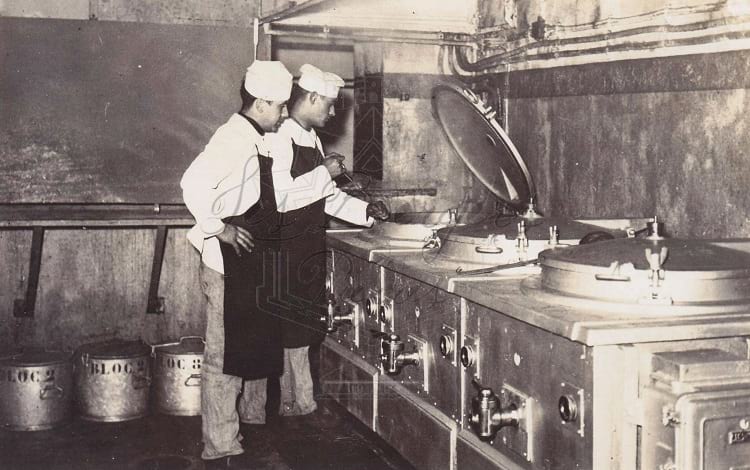 Some calculations did go wrong

Come 1935 and it was clear that Germany would attack France any day. To the disadvantage of France, regions in the vicinity of two European rivers, Rhine and Saar, became part of Germany. This was not anticipated by France in its fortification drive on borders. Faith in Belgium was another mistake. It was rightly anticipated that Germany would invade France through the Belgium route. It was also hoped that Belgium then, would approach France for a counterattack. But it didn’t happen this way as Belgium declared itself a neutral state. In a damage control exercise, France made frantic efforts to extend Maginot line defences to plug the emerging loopholes. Even Italy became an irritant, and the border with it had to be put on vigil.

As France braced up its borders, and stretched the Maginot line in tandem with emerging threats, Germany attacked Poland in 1939. France and Great Britain, going by their treaty obligations to Poland, declared war on Hitler. But the actual war would still take 8 long months. During this time, the two sides remained on red alert, waiting for the other side to attack first. And then, Germany struck all of a sudden as the French procrastinated in their cosy trenches. German Air Force had moved in for a kill. A bomb was dropped on Nancy, the French city. Hit hard, the French army and the British Expediency Force (BEF) were forced to retreat. Holland surrendered to Germany. French and British forces were clearly on the back foot. A small fortification on Maginot line, close to the Sedan town, fell to a determined attack of the German Infantry. Soldiers housed in fortress fought valiantly but lost, and their bunker became their graveyard. The Germans then systematically went about demolishing 6 more targets on the Maginot line.

Some units defied the order to surrender

Reacting to the consistent defeat, the concerned French General – Maxime Weygandordered his troops to withdraw immediately. On the other side, the British army (BEF) too was pushed back by the Germans. The stage was now set for the conquest of Paris. On way, a unit of French soldiers fought bravely. Their concrete fortress was badly damaged in German fire.

The concrete fortification after suffering damage due to enemy attack. (German Federal Archives)

In the night time the damage was repaired and the holed in soldiers readied for another German assault. They refused to lay down arms, even after Paris was taken over by the German army. Enraged Germans surrounded the fortress from all sides and bombed it hard for two hours. Presuming men inside dead or disoriented, Germans neared the target for the final capture. To their horror, soldiers inside the bunker fired with precision, killing or wounding 80 Germans. They came out only upon getting written orders from their superiors, proudly carrying the French Tricolour flag even as they marched to surrender.

Clinching victory was hard for Germans

The remaining French Army along the Maginot line still had a finger on gun-trigger and refused to quit. Their surrender would still take Germans a long haul of artillery shelling. Jules Pelletier, the Commanding Officer of a fort at Hackenberg, announced that he would fight to-the-end. Germans Shelled non-stop for two days but failed to deter him. Disgusted, they moved on to other targets, where too, they faced reverses. It was only when the ceasefire was officially announced that the French defenders came out and walked into the German captivity.

Thus, the Maginot line gave real nightmares to Hitler’s men. If France had not surrendered and commanded its defence forces to lay down arms, the battle would have continued. The French defenders had enough food and ammunition to keep fighting for 3 months. Grit and determination shown by the French army entrenched along the Maginot line was iconic. Their valour was all the more sanguine as it came at a time when the nation’s polity had meekly surrendered to Hitler’s onslaught.

A true memorabilia of French fortitude

Today the Maginot line is a war-ravaged relic keeping alive the memory of French defenders who lived and died for the honour of France in the worst of circumstances. Iron and concrete bunkers damaged in the enemy fire stand as mute testimony to the heroic fight of French soldiers during the Second World War. Many of the battered fortresses have been repaired and renovated for tourist attraction. Visitors are taken on a guided tour of the underground cantonment where the French defenders lived and fought to the hilt for the honour of their motherland. Some fortifications are still being used by the French army. Those that are decrepit and lost to elements still serve to remind us of the men in uniform who in spite of losing a battle, kept their nerve, morale and patriotism intact.

Enjoyed this article? Also, check out “Schwerer Gustav: The Largest Artillery Gun” That Was Built to Destroy the Maginot Line.

Previous Article
Amazon Spheres: An Unexpected Rainforest in the Amazon HQ at Seattle
Next Article
Gloomy Sunday: The Hungarian Song that Claims its Listeners Lives