Las Lajas Sanctuary: A Church with a Mysterious Mural Nobody Can Explain 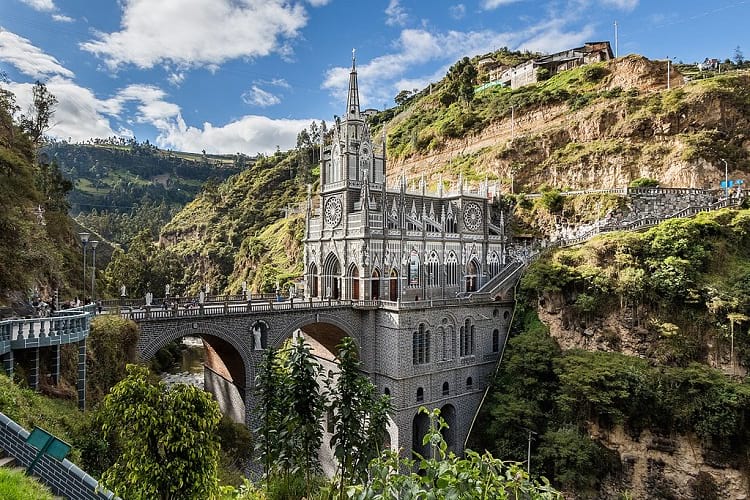 View of Las Lajas Sanctuary from the side. (Diego Delso / Wikimedia Commons)

Also known as the Sanctuary of Our Lady of The Rosary, Las Lajas is considered to be one of the most spectacular churches in all of Latin America. Constructed during the years 1916 and 1949 by staunch worshippers, it was funded by local churchgoers, the neo-Gothic-styled cathedral, built inside a canyon and dedicated to the Virgin Mary, is an astonishingly 330-feet-high structure, when measured from the bottom of the valley it stands on.

A 160-feet-long bridge connects the church to the other side of the canyon in the middle of the Guaitara River, which also serves as the entry point for pilgrims, who come from across the globe to catch a glimpse of the magical mural that still hasn’t lost its brilliance over the years.

Situated in the city of Ipiales in Narino, a district bordering between Colombia and Ecuador, the huge shale structure derives its name from the slate-like material, which was used to build the church with. Owing to the sedimentary rock used in building the cathedral, the sanctuary gets its Spanish name – Laja – from the English rock or huge, flat slab. Ever since the cathedral first came into being after its miraculous beginning, Las Lajas has become one of the most favourite tourist destinations in southern Colombia and also a revered place of pilgrimage for Roman Catholics around the world. 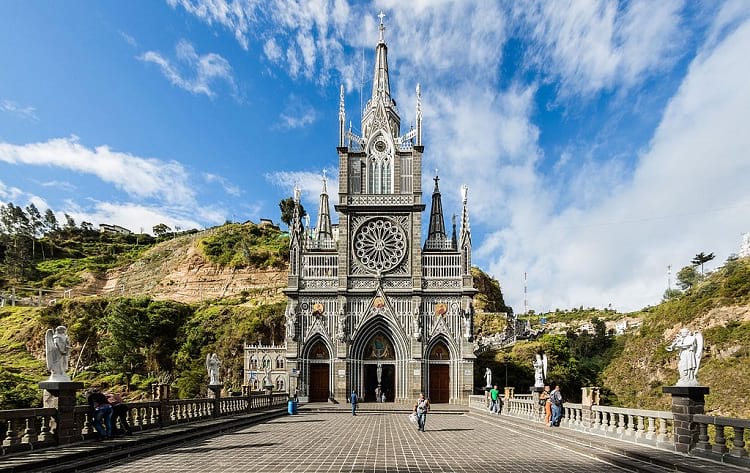 According to popular beliefs, in the year 1754, a local tribal woman named Maria Mueses de Quinones was passing through the canyon with her deaf-mute daughter Rosa, when the weather worsened. Caught in the middle of a huge storm, the mother-daughter duo decided to wait out the storm in the cave, when the unexpected happened. To the mother’s surprise, the young, mute girl exclaimed that The Virgin Mary was calling her, pointing to an illuminated vision at the top, inside of the cave.

Maria wanted to keep the holy sighting a deadly secret, until Rosa died of an illness a little later. She decided to take her dead child exactly to the same place where Rosa had first seen the image of Mother Mary to pray for her soul. And as luck had it, the Holy Virgin appeared again and revived Rosa, which was how people got wind of the mystifying place and began thronging it for a single glance.

But the image of Virgin Mary appearing to a human being and reviving her soul was only a part of a greater mystery that has never been unveiled to this day. Locals also believe that a blind man’s eyesight was inexplicably restored after he visited the church in the late 18th century. After Rosa came back from the dead, a shrine was built in honor of Jesus’ mother in the same place, which received canonical coronation (a permission granted or act carried out by the Pope to designate a halo or crown to a holy image of Jesus, Mary or Joseph) in 1952 and later identified by Pope Pius XII as a minor basilica in 1994.

Considering that the stories of Rosa sighting the Blessed Virgin are mere legends and part of folklore, how does one explain the image of the Holy Mother of Jesus behind the altar, holding Her Divine Son in Her arms, flanked by Saint Dominic and Saint Francis on either side, at the end of the church? No valid information is available as to who first drew the striking golden-blue regal illustration of Mary at the altar or whether Maria Mueses de Quinones and her daughter were only a figment of people’s imagination; no one could tell.

A few German geologists tried to look into the mysterious image painted on the wall by taking off some samples of the rock; and to their astonishment, there was no dye or colour or any sort of pigmentation that had gone into drawing the sacred painting; the colourful mural had occurred naturally. While it might take several hundred years to get to the bottom of the facts, The Las Lajas Sanctuary, which holds a secret that might never come to light, is a spectacle one must have on their places-to-visit list. 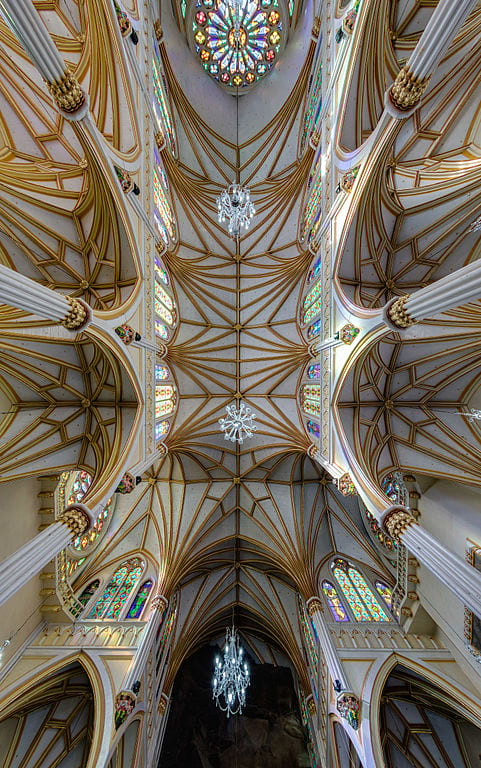 The ceiling of the central part of the church. (Diego Delso / Wikimedia Commons)

Enjoyed this article? Also, check out “Sagrada Familia: An Unfinished, Colossal Spanish Basilica, Under Construction for More than 136 Years“.

Previous Article
Graham’s Number: A Finite Number That Cannot Be Contemplated
Next Article
SS Baychimo: The Phantom Ship That Haunts the Arctic Waters