Kolmanskop: From Being the Richest Town to Now Being Devoured by the Desert 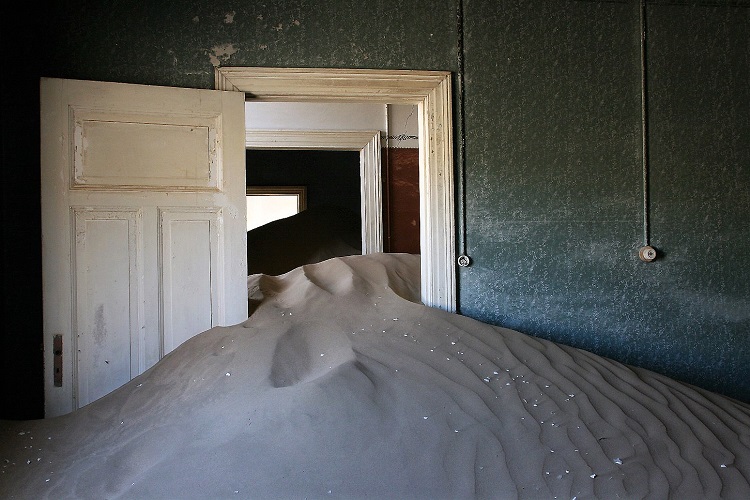 Inside an abandoned house in Kolmanskop. (Michiel Van Balen / Flickr)

Kolmanskop is the name of a railway station in Namibia (Southern Africa). It lies 850 km south-west from Windhoek – the capital city of Namibia, and 10 km from a secluded seaside town called Lüderitz. The station is named after a man called Johnny Coleman. This man, a transport driver, was stranded in a severe sand storm along with his ox wagon and died of extreme thirst in the hot desert. In his memory, the station was named Kolmaskop.  `Coleman’s hill’ in Afrikaans is called Kolmanskop, hence the name. It is called ‘Kolmannskuppe’ in the German language. The station, in course of time, became the hub of a diamond industry of world fame. Circa 1908, following official orders to keep the Kolmanskop railway line clean, a railway worker picks up a sparkling stone from the track and takes it to his boss. August Stauch, the boss, a mineralogist by hobby, was impressed with the finding. It surely wasn’t an ordinary stone. He showed it to Sonke Nissen, his friend and a Mining Engineer. It was a diamond. Great news indeed, but they must keep it to themselves, to make the most of it. They do just that and keep the finding a closely guarded secret. They quit their jobs and acquire 75 acres of land at Kolmanskop, between Luderitz and Keematshoop. With fond dreams of digging diamonds, and living happily ever after, they settle down in their new venture.

Diamond transformed a sleepy habitation into a rich township

A secret as precious as a diamond, obviously, couldn’t hold for long. Soon, it was out in the public domain and the diamond seekers swarmed the area. In a matter of 23 years, the place got transformed into a vibrant township, the world’s richest. With a population of just 400 people, the town, in 1911, boasted of electric power, school, hospital and casino. It also had a theatre, sports hall, ballroom and swimming pool. An ice factory was set up to supply ice for the fridge in households.  The town had a functioning post office, bakery and shops for all kinds of provisions. The hospital, notably, had an x-ray machine, the first ever to be installed in South Africa. Apart from medical use, the machine helped to fix workers who tried stealing diamonds by swallowing them.

The government taking notice of the diamond business

In time, the state administration woke up to the diamond loot and banned possession of land in Kolmanskop for private use. The Railway Station was declared a restricted diamond area. A well-organized industry came up in the region, to separate diamond from sand. Cape Town was unlucky to have missed this industry all because of a bad decision. The desert region of kolmanskop was offered to Cape Town administration in 1885, but the Cape government, then, had declined the offer.

World War came as a spoiler for the diamond industry

The diligence that went into separating diamonds from the sand was enormous. This can be gauged from the fact that processing 10 tons of sand yielded just one or two carats of diamonds. Yet, up to 1914, a massive amount, 1 ton of diamond, was extracted. As world war broke out the same year, the diamond industry came to a grinding halt. The Germans, having a major engagement with the diamond industry, fled the area. Thereafter, Kolmanskop came under the direct administrative control of South Africa. 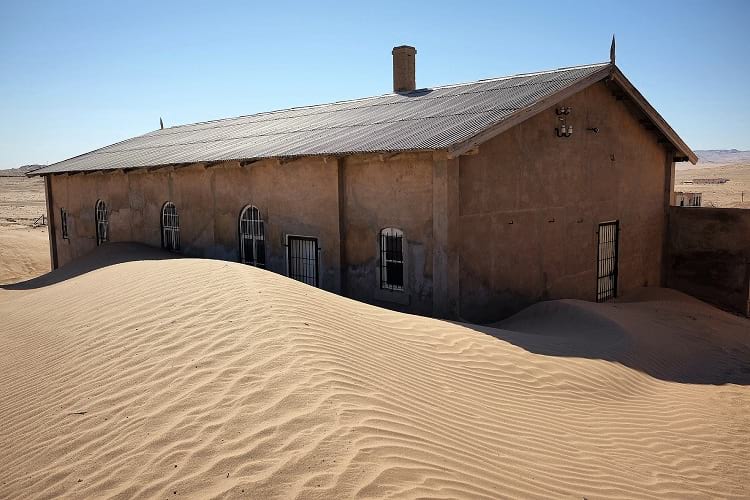 Intensive mining exhausted one resource, forcing search for another

With the depletion of diamond reserves around the Railway Station, the mining activity had to be moved to the contiguous distant areas. Prospective mining areas were found in the south of Luderitz, and up to Oranjemund town at the mouth of river Oranje, near the South African border. In a decade’s time, the diamond industry shifted completely to the South and the 1914 setup was trashed. With all inhabitants quitting Kolmanskop by 1960, the only vacant building remained, to be dishevelled and engulfed by the surrounding desert.

The evacuation of the town was hastened by the discovery of upscale diamond deposits in 1928. These deposits were on beach terraces close to the river ‘Oranje’. People rushed 270 km south of Kolmanskop to grab the precious bounty. In the process, all settlements in the region were uprooted. For some time, Kolmanskop served as a supply depot for the mining operations at the far-away diamond deposits. But subsequently the supplies got sourced from South Africa and connections with Kolmanskop were severed for good.

As the diamond industry shifted base, ruins of Kolmanskop became a tourist hub The abandoned homes and buildings were dug out, repaired and renovated. These were typical German architecture with large windows and curtailed roofs. The curiosity soon became business and Kolmanskop came back to life in a new avatar – a tourist destination. The risen-from-sands township is now an organized vacationer, guiding visitors in multiple languages: English, German and Afrikaans. Tours operate twice daily from Monday to Saturday. On Sundays, only one tour is conducted. The desert sand blows through the day and only scant vegetation grow in Kolmanskop region. Yet in its heydays, gardens with eucalyptus trees, lawns and flowers were kept and maintained by the township. Freshwater was brought in through railway tankers and stored for irrigation as well as human consumption. The harsh desert conditions discouraged keeping of pets. But the story of one pet ostrich is very much on record. The bird was generally hostile to people but drew cheers on Christmas Eve when it pulled at celebratory sledge on sand mounds. Like diamonds are forever, Kolmanskop remains in the reckoning even in doom.

Fact Analysis:
STSTW Media strives to deliver accurate information through careful research. However, things can go wrong. If you find the above article inaccurate or biased, please let us know at feedback@ststworld.com.

Previous Article
Children of Llullaillaco: Where Young Children Were Sacrificed to the Gods
Next Article
NASA’s Deep Space Network: How We Communicate with Space Probes Billions of Miles from Earth