Path to Blood and Insanity: Uncovering the Mystery of the Hope Diamond 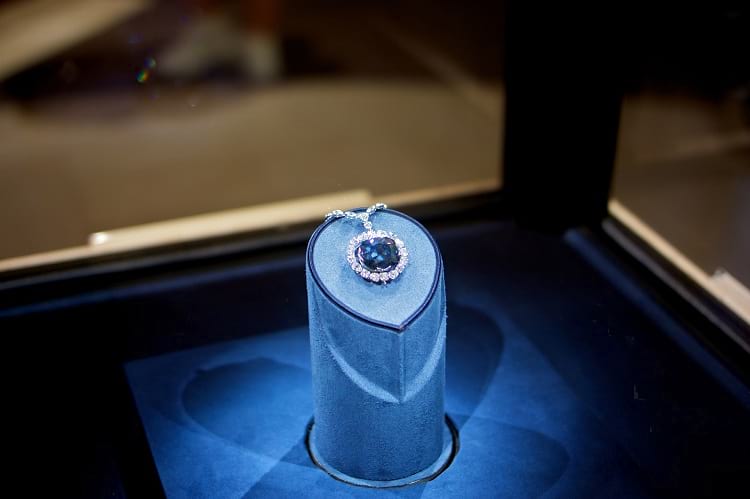 The Hope Diamond is believed to be one of the most precious gems in the world. The gem is characterized by a dazzling blue color and weighs almost 45 carats. Though mankind has always been fascinated by the existence of diamonds, the story of the Hope Diamond gained popularity over the last few centuries, due to all unusual reasons. Hope Diamond has not only remained a matter of pursuit to researchers but kings, priests, institutions, jewellers and merchants too.

People are not only attracted towards this magical gem because of its shine and appearance; there is something more to the story of the Hope Diamond. If history and folklores are to believed, it is said that the diamond is cursed. In the following paragraphs, we will explore how the curse of the hope diamond led to misfortunes and even took the lives of many.

Discovery of the Hope Diamond

There are many paradoxical stories about the origin of the Hope Diamond; it is believed that the diamond must have been most likely found in the now extinct Golconda mines, in the southern part of India. (It is known that many precious diamonds in the world have been found in these mines including the precious Koh-i-Noor). In his book titled ‘The Unexplained’, Karl Shuker mentions a few lines about the origin of the magical gem. He wrote, “It sparkled in the brow of an Indian temple idol — until it was impiously plucked out by a thieving Hindu priest, whose punishment for this unholy act was a slow and agonizing death.”

The curse, deaths, and misfortunes

As per Karl Shuker’s book, the diamond was later found in Europe during the 1790s. It existed with a French merchant named Jean Baptiste Tavernier, who apparently sold it to King Louis XIV and earned a huge profit. It is believed that the merchant died later and was attacked by a pack of wolves. For a long time, the diamond remained with the royal family of France (King Louis XIV and Marie Antoinette). At the time of the French Revolution, the diamond was stolen in 1792 and remained missing for the next few decades. The royals including King Louis XIV and Marie Antoinette were beheaded in 1793, and it is believed that their death happened due to the curse of the diamond.

Another incident followed with one of the close associates of the royals. Nicholas Fouquet, who used to work for King Louis XIV had once worn the diamond for a special occasion. The relationship between King Louis and Nicholas started turning bitter soon after that. Nicholas was later banished from France. He spent 15 years of his life inside the fortress of Pignerol. It is believed that Fouquet died inside the fortress and his remains were later moved to Paris. Not only this, Marie Antoinette’s close confidante Marie-Louise was killed by a mob. It is also believed that her head was put on a pike at Marie Antoinette’s prison window, after her death.

It is conjectured, that years later the diamond was cut into many smaller pieces by Wilhelm Fals shortly after which his son murdered him and later killed himself. Many unconfirmed reports revealed that the Hope Diamond was later found with Britain’s King George IV. The king’s debts were so high at the time of his death (1830); the blue diamond had to be sold in private to clear the dues.

In the year 1839, Henry Thomas Hope acquired the diamond’s possession. The diamond was thus named after him. After Hope, passed away, the gem remained in the custody of various different owners over the years.

A popular socialite in America – Evalyn Walsh McLean, got her hands on to the Hope Diamond in the year 1911. She believed that the diamond was supposed to bring good luck. She was often spotted wearing the diamond at parties. Unfortunately, even Evalyn couldn’t escape from the curse of the diamond. Her nine-year-old son Vinson was killed in a car accident in front of her estate. Later, Ned (her husband) eloped with another woman and was even declared insane. Evalyn McLean Reynolds (Evalyn’s daughter) died due to drug overdose at the young age of twenty-five. Evalyn was never able to recover completely from this loss and died of pneumonia. McLean’s jewellery collection was put up for buyers after her peaceful death in 1947. Later, Harry Winston acquired the Hope Diamond. He also raised funds through it, as the diamond became a part of ‘The Court of Jewels’ tour from 1949 to 1953. These stories of uncommon deaths, murders, thefts, and misfortunes will keep reminding us of the fact that even if the diamond was not cursed, it caused a ‘bad luck’ to those who owned it or were related to the owners.

Enjoyed this article? Also, check out “1959: What Really Happened at Dyatlov Pass?“.

Recommended Read:
1. Hope Diamond: The Legendary History of a Cursed Gem | By Richard Kurin
2. The Unexplained: An Illustrated Guide To The World’s Natural and Paranormal Mysteries | By Karl P. N. Shuker

Recommended Watch:
The Legendary Curse of the Hope Diamond (1975)

Previous Article
SS Baychimo: The Phantom Ship That Haunts the Arctic Waters
Next Article
Zinnia, The Prodigal Flower of Bonhomie Between Life in Space and Life on Earth