Hoosier Cavefish: The Blind Cavefish from Indiana Named after Their NCAA Basketball League 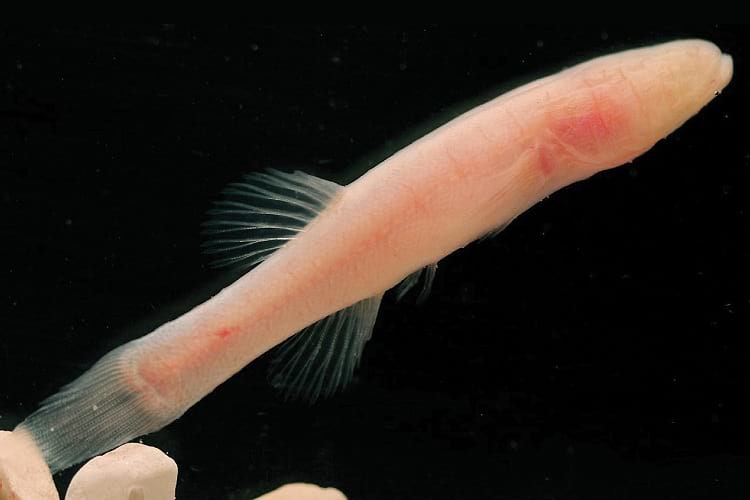 The Hoosier Cavefish or Amblyopsis hoosieri is a species of subterranean blind cavefish that was discovered in 2014. The fish was first found in the southern region of the American state of Indiana. The Hoosier Cavefish is the first new species of amblyopsid cavefish to be discovered in over forty years. Amblyopsidae is a family of small freshwater fishes that can only be found in really dark ecosystems. For example, they are mostly found in caves, swamps and subterranean lakes. Most of the members of this particular family are blind. Some have very primordial eyes that can only detect the difference between darkness and light. The body of this fish is Bibendum shaped and wrinkly.

What does ‘Hoosier’ mean?

The unusual term ‘Hoosier’ is an informal word used to refer to any resident of the state of Indiana. Many consider it to be a bastardization of the phrase – “Who’s there?” probably uttered by Frontier-time Settlers in the region of Indiana. This particular member of the Amblyopsidae family gets its name from the Indiana Hoosiers basketball team, which represents the University of Indiana in the NCAA basketball league. The senior author of the seminal research paper describing the Hoosier Cavefish, Dr Prosanta Chakrabarty, was an avid fan of the team.

The Hoosier Cavefish is the closest relative of Amblyopsis spelaea, a resident of the Mammoth Cave System in Kentucky, which also happens to be the longest cave system in the world. Interestingly, the two species are separated by the river Ohio, which also separates the states of Kentucky and Indiana. The main difference between A. spelaea and A. hoosieri is in size and vision. The former has a mutation in the gene rhodopsin, which is a significant factor in the development of vision. The Hoosier Cavefish lacks this mutation and is therefore completely blind.

The Hoosier Cavefish is mainly found in caves developed in carbonate rock of the Crawford-Mammoth Cave Uplands in the United States. These subterranean species are distributed among sixty-eight caves and six springs throughout the state of Indiana. The area is bounded by the Ohio River and the Eastern Fork of the White River. Researchers have discovered that the fish is not found in those caves that had been covered in ice during the Pleistocene Period. It is basically found in pools, slow-moving cave runoffs and streams. The Hoosier Cavefish thrives in shallow depths of 10 cm to 2 metres. The Hoosier Cavefish also displays a preference for larger pools with boulders, crevasses and ledges. During high flow conditions, such as during monsoon, the fish choose to seek refuge under ledges, crevices and other breakdown areas. 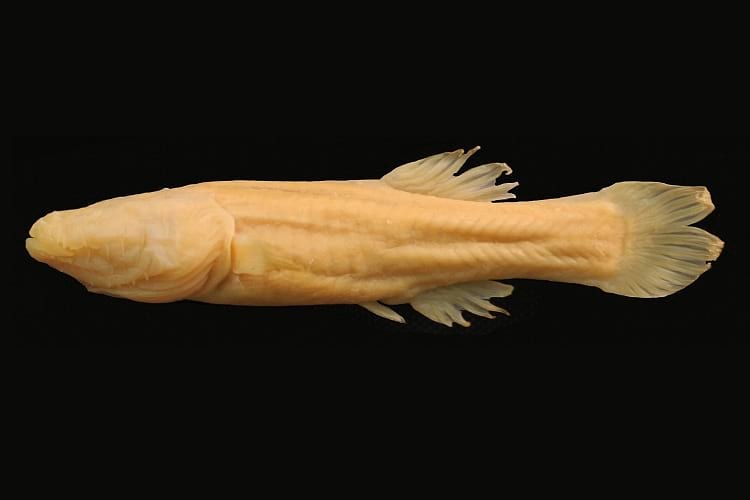 The Hoosier Cavefish is 6 to 8 cm long and is more robust than its Southern cousin. The head is large, taking up over a fourth of its total length. Its body is flat dorsally; however, it is plump and has rounded fins. The average size of the fins of the Hoosier Cavefish is small. Also, the fins are transparent. Compared to the A. spelaea, this cavefish has smaller mechanosensory neuromasts on its papillae. These neuromasts allow the fish to sense movements in the surrounding waters. Since they are exclusively found in subterranean waters, their surroundings are absolutely dark. The Hoosier Cavefish also carries a fully-formed rhodopsin gene, although it lacks the mutation required for vision. The fish is generally pinkish-white in colour, with traces of red around the gills. The anus of the A. hoosieri is located towards the front of the body, directly behind the gills. The lower jaw of the fish is slightly more elongated than the upper jaw.

How do they reproduce?

The Hoosier Cavefish generally breeds between February and April, when the subterranean water levels are very high. The eggs of the cavefish are brooded in the gill cavity of the females. After the eggs hatch, the females nurse the young for a period of five to six months. After this period, the young Hoosier Cavefish start to demonstrate signs of independence. They reach sexual maturity at three or four years of age. The Hoosier Cavefish is suspected to have a pretty long lifespan of twelve-fifteen years, but some among them may live as long as twenty years.

Dietary habits of the blind fish

This unique and interesting species of blind cavefish is actually under threat due to a wide plethora of factors. Sedimentation from agricultural runoff and soil pollution due to the use of pesticides and fertilisers are two major threats stemming from human intervention. Apart from that, human encroachment of protected species habitats, quarrying and mining, and scientific exploitation are a few other threats to the Hoosier Cavefish.

The Hoosier Cavefish is a very precious example of a stygobiotic species and is thus immensely valuable from a scientific point of view. The state of Indiana also has legislation in place to ensure the conservation of these rare Amblyopsidae fishes. The Hoosier Cavefish is classified under “vulnerable” in the ‘IUCN Red List‘. Quarrying is a very significant risk to the cavefish population as many cavefish populations have been completely eliminated. One of the notable places where it is known to occur is in the Spring Mill State Park in Bloomington, Indiana.

This unique and interesting species of fish is a formidable example of how versatile life can be. Life always finds a way – and millions of years of evolution have led to the discovery of some of the most interesting aquatic species on this planet. The Hoosier Cavefish is one of the most monumental discoveries and accomplishments in the field of ichthyology.

Subterranean regions like caves and karsts always have an aura of mystery surrounding them. Life at such lightless, dark depths is considerably deviant from life at the surface. The study of interesting species like the Hoosier Cavefish gives scientists a rare opportunity to understand the delicate balance in biodiversity that exists in these places. Previous Article
Iftikhar Ali Khan Pataudi – The Only Cricketer Who Played for Both England and India
Next Article
Robert Wadlow: Trials and Tribulations of the World’s Tallest Man