Hochosterwitz Castle: The Medieval Castle in Austria That Remained Impregnable from Enemy Attacks While there is no dearth of spectacular castles in Austria, Hochosterwitz Castle is perhaps one of the most outstanding strongholds from the Medieval Age. It is at an altitude of 2,178 feet above sea-level in the Austrian province of Carinthia and perched on top of a 564-feet high Dolomite rock, with the route to the castle curving around the rock. On clear days, you can see it from nearly 30 km away. From the castle itself, you have expansive views of the glorious countryside.

The Dolomite rock on which Hochosterwitz Castle sits has had human settlements since the Bronze Age. We first hear of the Castle in 860 A.D. when Louis the German, King of East Francia, mentions Asterwiza as one of his properties in a deed that listed the properties he was donating to the Archdiocese of Salzburg.

In the 11th century, Archbishop Gebhard of Salzburg gave the castle to the Sponheim family in return for their political support in the Investiture Controversy. This was a long-lasting power struggle between Henry IV, the Holy Roman Emperor, and Pope Gregory VII, each insisting they had more God-given right than the other to select and appoint the clergy.

At the time, the higher ranks of the clergy came from aristocratic families; the first-born son inherited the family title and of the remaining sons, those that didn’t go into the military, took ecclesiastical vows. Since the upper clergy had control over vast swathes of land and received enormous sums of money from the population, this was a very lucrative profession. By appointing the clergy, the King or the Pope could control the properties that came to them and thus exert more influence and gain more power.

By 1122, the Sponheims grew more powerful and when one of their own, Henry IV, became the Duke of Carinthia, they broke away from Salzburg. At this time, they gave Hochosterwitz Castle to the Osterwitz family and conferred on them the honour of being the hereditary cup-bearers of the Duke of Carinthia.

Hochosterwitz Castle remained with the Osterwitz family until 30 May 1478 when the last of the family, Hans Schenk von Osterwitz, before his death, repaid his debts to the Habsburg Emperor Frederick III by handing over the family castle, lock, stock, and barrel. 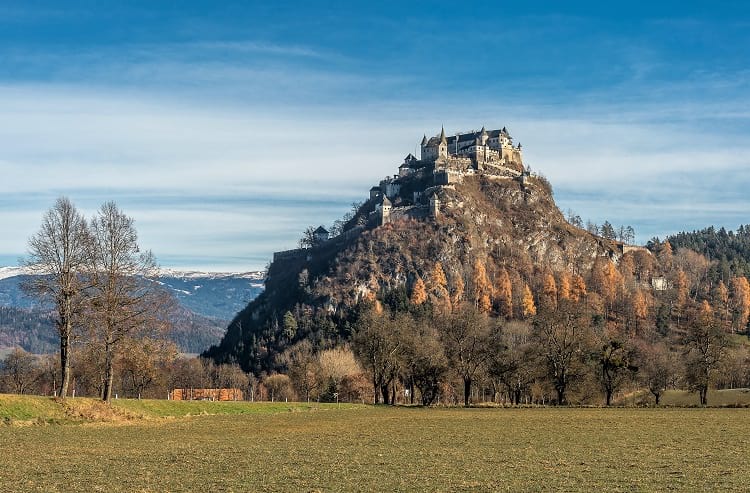 To reach Hochosterwitz Castle, you must pass through 14 gated entrances before you can step foot on its grounds. Baron George Khevenhüller, the Castle’s aristocratic owner, devised these defences between 1571 and 1600 to protect the Castle from Turkish incursions, and they proved to be massively successful. The enemy was never able to get past the fourth Engelstorgate and the Castle remained impregnable.

At another time, much before the time of our Baron, before the 14 gates existed, the Castle was still able to stave off enemies. It survived a famous siege by Margarethe Maultasch of Tyrol, but, of that, it is debatable whether the Castle survived on its own merit or on account of Margarethe’s gullibility.

Margarethe ducked the dead ox and then over thought the matter.

“If they can throw oxen and corn at us,” she thought, “they must have plenty of supplies to last them a good long while. That means, we’ll be here forever if we continue with the siege.”

Since she couldn’t afford to continue the siege indefinitely, she took her army and withdrew.

Of course, we don’t know for sure if it was really the ox that made her withdraw, but it’s a good story and bears repeating.

The Baron was a man of vision and saw enormous potential in Castle Hochosterwitz. Not wanting it to be a Royal bequeath but his own personal property, he paid the Habsburg Emperor a good amount of money for its outright purchase in 1571.

Then, using his own money, he proceeded to fortify the Castle in every way possible. The 14 gates mentioned earlier were each equipped with different and deadly methods of tackling the oncoming enemy. If you didn’t get boulders dropped on you, there might be an outpouring of boiling oil in the offing. Or archers waiting around the next bend, ready to unleash their arrows at you. The Turks got a taste of it and retreated in haste.

Baron George Khevenhüller continued fortifying the Castle throughout his life and lived pretty much in peace and contentment there with his two wives and their offspring. In his will, he warned his descendants to never take the Castle’s security lightly. They clearly heeded his advice and never let the Castle slip from their grasp. It remains in the Khevenhüller family’s possession to this day.

They open certain sections of it for a fee to the public during the summer and get thousands of visitors. It is certainly good to have an astute ancestor whose wisdom is still paying off centuries later. If you happen to visit, check out the great collection of medieval weapons and armours.

When you see these, you realize how fearsome people used to be back in the old days. Not that human nature has changed drastically in the present age, but, probably, very few people would have the gumption to go into battle in creaking iron suits while dodging wild swings from sharp swords and spears.

Enjoyed this article? Also, check out “Neuschwanstein Castle: The Story Behind the Iconic Bavarian Castle That Inspired the Disney Castle“.

Previous Article
‘Ape Woman’ Julia Pastrana: The Sad and Short Life of the Ugliest Woman in the World
Next Article
The Hands Resist Him: A Haunted Painting that Spooked the Virtual World for Decades