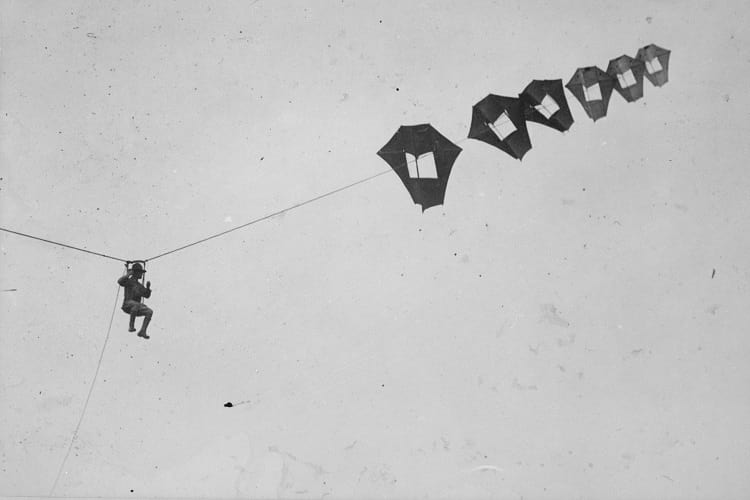 A lieutenant being lifted up in the sky by giant Perkins man-carrying kite. (U.S. National Archives and Records Administration)

Man-lifting kites are, as the name suggests, specially designed kites that can lift humans. Back in the day, when aeroplanes and helicopters were merely the stuff of high-fantasy, these man-lifting kites were the closest that humans could get to their dream of flying. The kites were either used for pleasure and entertainment or more functionally for fast aerial reconnaissance in a battlefield. The man-lifting kites had undergone various stages of development in the past, at the hands of various eminent figures. The 20th-century advent of powered flight, however, put a halt on innovations to these kites.

Charting the history of the man-lifting kite takes us back to 6th century China. The records in the Book of Sui tell us of the tyrannical Emperor Wenxuan of Northern Qi. According to the book, he had his prisoners executed by making them attempt to ‘fly’ using bamboo mats while throwing them off a tower. These instances of the man-lifting kite’s use were almost always fatal, except in the case of a prince Yuan Huangtou, as recorded in the Zizhi Tongjian. The prince managed to fly almost 2.5 kilometres from the 33m Golden Phoenix Tower to the Purple Way, where he finally fell.

Another record from the far-east tells us about Ishikawa Goemon, a Japanese thief in the 16th century. He had successfully used the man-lifting kite to steal the golden scales from an ornamental image atop the Nagoya Castle. He had mounted a trapeze attached to the tail of a giant kite, which his accomplices manoeuvred from the ground. In the 17th century, Kawamura Zuiken, a Japanese architect, made use of man-lifting kites to lift his workers during construction.

The most seminal innovation for the man-lifting kite was by George Pocock in 1822. He had initially developed a method of using these kites to lift men to distant hill-tops. In 1822 he revolutionized the arena with his big invention: the kite-drawn buggy. This innovation kindled the interest in further developments to the man-lifting kites and its various utilitarian applications that came about in the 19th century.

Captain B.F.S Baden-Powell, in the early 1890s, designed a hexagonal man-lifting kite, which he named the ‘Levitor’. This was meant for military use for aerial observation, or to lift wireless antenna and other such heavy loads. After George Pocock, the first record of successful use of the man-lifting kite was in 1894, using the Levitor. Baden-Powell had lifted a man 50 feet off the ground using these kites. Since this instance, the Levitor was regularly used to lift men, even up to 100 feet off the ground. It was so successful, that the Levitors were to be used in the Boer War. However, due to the delay in its delivery to South Africa, Baden-Powell’s kites could not be put to use.

Even before Baden-Powell invented his hexagonal kites, Lawrence Hargrave designed a box-kite in 1885. However, he used this contraption for the first time on 12th November 1894, after Baden-Powell’s revolutionary success. He lifted himself using this kite around 16 feet off the ground from a beach in New South Wales’ Stanwell Park. The entire rig consisted of four box kites that were attached to the ground using piano wires. In the vein of Baden-Powell’s Levitor, Samuel Cody invented a man-lifting kite for military use. He intended his contraption to be used to observe the enemy forces during the war and named it The Bat. Cody had mounted himself on an early model of the Bat and crossed the English Channel. This garnered much interest from the War Office and he was commissioned to conduct trials through 1904-05. Subsequently, he could lift a test-subject to a record 1.219 metres. The Bat was deployed officially in 1906 and acted as a precursor to the entry of aircraft into the domain. These war-kites would ascend as any other kite would. The descent, however, was in the form of a glider, making it more suitable to violent war-zones. Samuel Cody later modified the Bat into an 8.9kW engine-powered untethered kite. 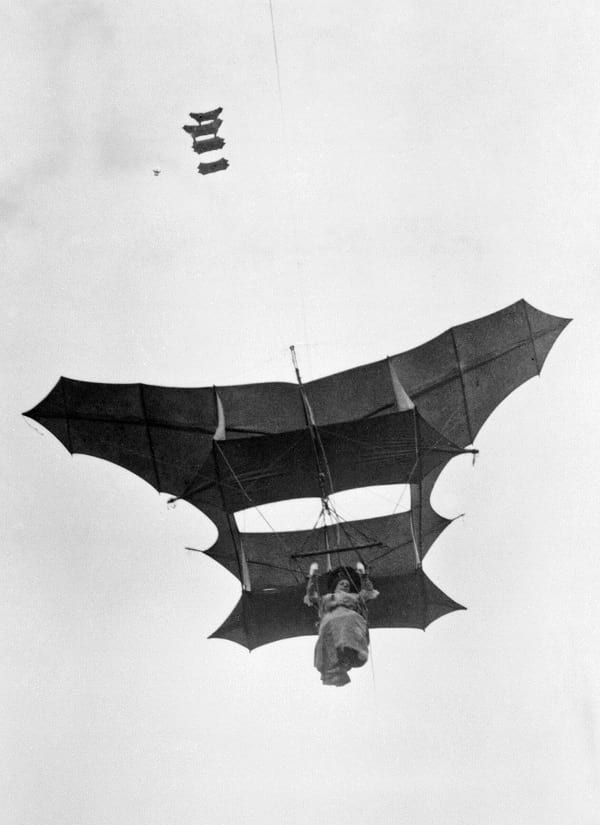 The Hafner H.8 Rotachute was designed by Australian engineer Raoul Hafner in the 1940s as an experimental single-place strap-on rotor kite. The Rotachute was intended to be an alternative to conventional parachutes and theoretically, could deploy a soldier accurately in warzones. When hand-launched, these kites tested successful, but there were several issues when dispatched from aircraft, as it ideally would be. 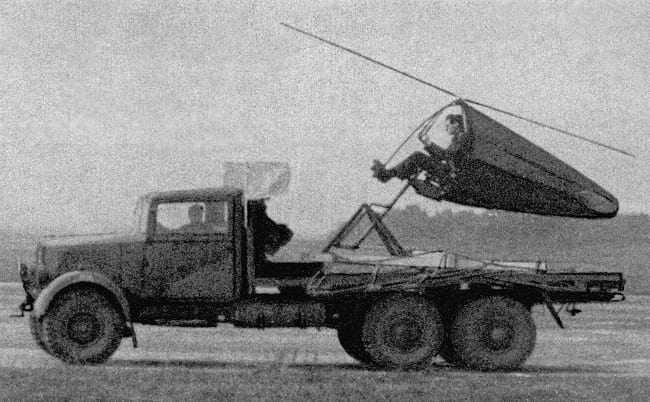 The Hafner Rotachute underwent up to ten evolutions (till the M.10) in March 1941. The initial Mark 1 had a tubular steel structure, rubber-mounted motor hub, and had a single seat. The Mark 3 version incorporated metal rotor blades. The successfully air-launched M. 10 was a sophisticated design incorporating mass-balanced rotors made of wood, with a rotor-span of 10ft. Despite being a practical design on paper, an occasion to put the Hafner Rotachute to use never came to pass. Around eight of these man-lifting rotor kites were constructed, and they were mostly used to test for future projects, namely the Hafner Rotabuggy.

On November 16, 1942, the Rotabuggy was tested for the first time. However, the Diamond T lorry that was towing the unit was unable to pick up enough speed to launch the Rotabuggy into the air. The lorry was later switched for a supercharged Bentley vehicle, and on November 27, the Rotabuggy finally had a successful takeoff. The Rotabuggy also went through many stages of evolution, just like its predecessor. Stabilizing any vibrations, increasing the highest attainable speed, changing up the towing vehicles, and so on, resulting in a fully functional model. The machine was at its peak when launched by Whitley Haydrian and Airspeed Horsa, and flew at 400 ft-65 mph for over 10 minutes. It all went downhill when the Rotabuggy could not maintain its popularity with the onslaught of gliders in the 21st century. The gliders could transport entire vehicles with ease, and the need for the Rotabuggy had passed. No further models of this hybrid man-lifting kite were created. A duplicate model of the Rotabuggy can still be seen in the Museum of Army Flying in Middle Wallop.

The Rogallo Kite and its significance

Francis Rogallo, an aerospace engineer invented the Rogallo Wing which was developed with the help of wind tunnel testing. These Rogallo Wings were later integrated into man-lifting kites by NASA. These kites were generally propelled by ground or (later) aero vehicles. Similar to Cody’s design, the Rogallo kite also released the passenger into a controlled gliding descent. 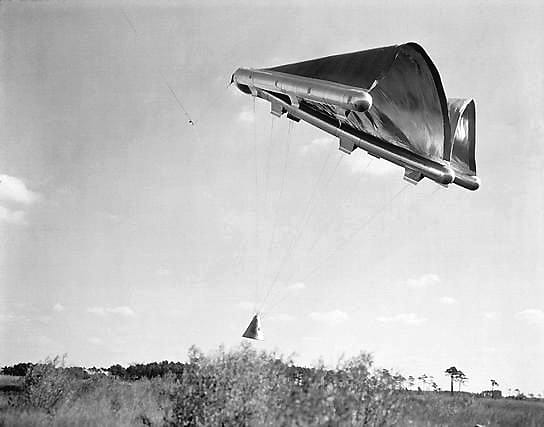 The hang-gliders, developed subsequently, were actually versions of man-lifting kites. They were evolved from the gliding descent employed by the Rogallo Kite and the Bat. While Barry Hill Palmer’s hang gliders (using Rogallo Wings) were thriving, so were other versions made by John Worth, Mike Burns, and James Hobson. Almost all of these versions were in use parallelly in the ’60s till it was standardized later.

John Dickenson used a version of the Rogallo Kite, to tow himself while on a boat in September 1963. These Ski Wing water ski kites also had elements of the Ryan Aeronautical flex-wing aircraft. The stability of this design actually helped popularise the watersport in the ’60s and ’70s.

Alexander Graham Bell, amongst the plethora of ground-breaking work that he did, also created a tetrahedral man-lifting kite. His design employed sticks arranged into triangular ‘cells’, the overall appearance akin to a honeycomb. Bell’s model soon evolved from a one-cell design to the “Cygnet” model of the early 1900s comprising 3,393 cells. This gigantic kite was used to successfully lift a man 186 ft above sea-level. The success of the Cygnet led to speculation about using it for observation in the Arctic. However, the relevant trials were yielded unsatisfactory results and the plan was shelved. 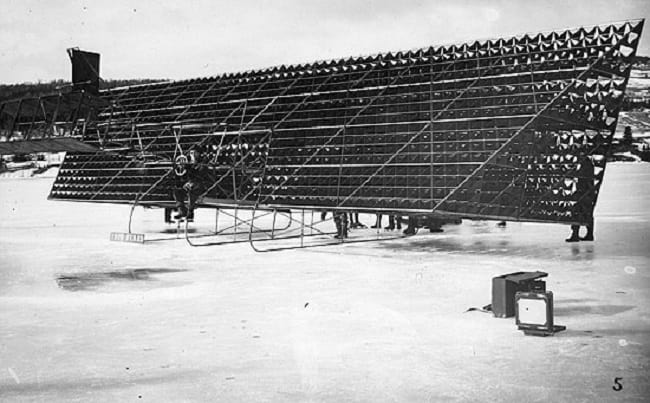 The decline of the man-lifting kite

The decline of the man-lifting kite started with the advent of powered flight. The contraption still remained in the mainstream for a while, with the design modified to lift heavy weights. However, the Wright Brothers’ first flight in 1903, was a step ahead in the development of cutting-edge aerial transportation. The need for man-lifting kites soon took a backseat. The man-lifting kites that allow un-tethered flight still survive today in the form of hang-gliders and paragliders used for adventure sports.

Enjoyed this article? Also, check out “Franz Reichelt: Dressmaker Who Jumped off the Eiffel Tower Experimenting with Self-Designed Parachute-Suit“.