The Amazing HeroRATs and their Keenness to Detect Landmines and Tuberculosis 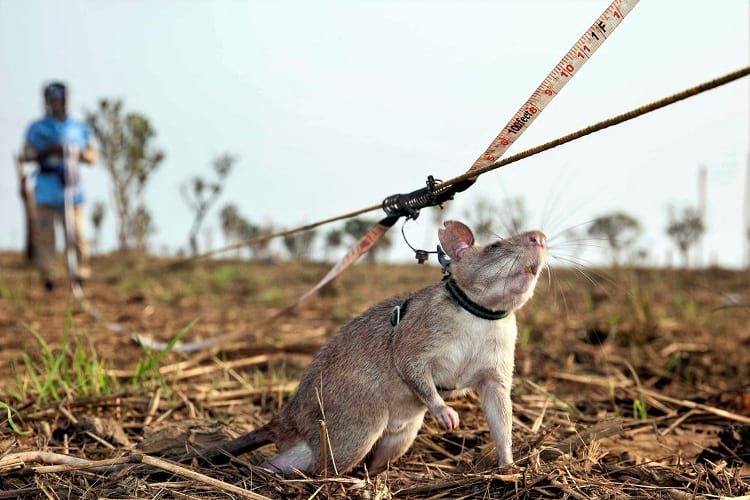 APOPO which stands for “Anti-Personnel Landmines Removal Product Development” is a world-renowned non-governmental organisation founded by Bart Weetjens, a Belgian rat-enthusiast. The Tanzanian based NGO is involved in several humanitarian pursuits; one of the most noteworthy being the training offered by them to giant-sized pouched rats (Cricetomys gambianus) to detect spots of landmines and outbreak of tuberculosis (TB). These are the two primary menaces that have plagued the African landscape since long.

There are more than 60 countries where gruesome disasters and accidents take place because of life-threatening landmines and other explosives in war-torn areas. These occurrences impede the nation’s progress and development besides precipitating untold casualties and injuries.

On an absolutely different spectrum, inaccurate and time-consuming methods to detect tuberculosis make it one of the world’s most infectious and lethal diseases. Statistics show an average annual TB contraction of 10 million people out of which around 1.8 million succumb to the disease whereas approximately 3 million cases remain undiagnosed.

The APOPO rats which are extremely sensitive to smell have earned the much-deserving byname ‘HeroRATs’. These rats give back a safe and secure land to the communities congenial for growth and development.

The inception of APOPO

Founder Bart Weetjens stood firm in looking for an all-encompassing resolution of a local problem with the help of locally generated resources. His prime objective was to fix on an agreeable and affordable solution which communities could put to use rather than taking recourse to expensive techniques with integrated foreign technology.

According to Weetjens, the principal advantage of using rodents lies in the fact that they can be trained and procured aplenty in a cost-effective manner.

Each sniffing Apopo rat comes at an average price of $7,600, inclusive of administrative and operating expenses. On the contrary, a sniffer dog might cost more than three times as much only to train. 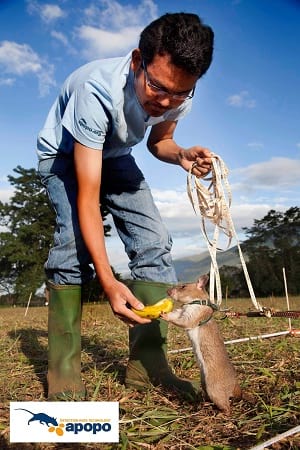 Feather-weight to tread on the landmines: The pouched rats have an average lifespan of 8 years. So they turn up as a pretty good investment. Furthermore, the critters are excessively lightweight to walk over the landmines without triggering them. They apply their nasal hunch to find out the precise location of the explosive. As of date, Apopo has amassed the goodwill of zero casualties.

Rapid detection of landmines: On the counter, one giant pouched rat can forage an area of more 2000 square feet in a time span of 20 minutes. A similar human action would take up to four days to accomplish.

Attuned to climatic variations: The rats are native species of the Sub-Saharan tropical zone of Africa. They are accustomed to the prevailing weather and resilient to pandemic diseases. Minimal resources are required to train and raise a rat to its adulthood.

Lightning fast pace to check Tuberculosis (TB) bacteria: In the case of detecting TB, the major advantage is the speed at which the rats execute the task. Standard examining procedures at public clinics involve the use of a microscope to detect TB, which is slow and sometimes incorrect. As per records set by APOPO, a trained rat can assess 40 samples in 7 minutes.

Training the rats to detect landmines is not an easy process. Firstly, the rodents, just at their infancy, need to pick up the learning acumen to be in the vicinage of humans. Secondly, these gnawing animals do not possess the ability to fling back to verbal instructions. Hence, the trainers uniquely teach them with a clicking sound which implies their earnings in the form of food rewards (usually peanuts or bananas). Finally, the rats are trained to cling on to trappings and harnesses and walk over tight ropes suspended between two handlers across the fields.

Rats intended for mine-detection are initially shifted to a sandbox where they are made accustomed with the scent of explosives by sniffing out TNT-suffused tea balls. Ultimately, they are drilled on a test field that accommodates both active and inactive mines.

At the time of discovering a potential landmine, the trained skilful rats break off and scratch the TNT-scented location. The human de-miners then put a mark on the spot and later return to excavate the area. If they discover a landmine underneath the spot, they detonate it immediately.

The overall training takes nearly nine months for each rat. Since the animals live for only eight years, it becomes burdensome for an animal with a fairly short lifetime to receive this elaborate training and perform to the finest standards of excellence.

It is to be noted that rats only form a component of an integrated demining operation. Pieces of equipment like metal detectors and mechanical demining gears still remain indispensable. Till 2016, the HeroRATs surveyed over 270 square miles of farmlands in Mozambique. The rodents’ uncovered 13,826 mines, discovered 29,031 small-sized ammunitions and 39,601 unexploded ammunition. 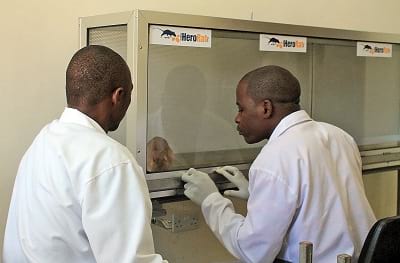 In this scenario also, the rats undergo nine months of training. The rats are given lessons to recognise the odour of typical molecules that indicate the existence of the tuberculosis germs. Sputum samples that are already examined through conventional tests are rechecked by the rats. They sniff through a series of holes in an enclosed glass chamber that houses the sputum samples. When a rat becomes aware of TB, it signals by brushing its nose against the particular sample aperture or scratching on the floor of the cage.

At the present time, the United States is analyzing the usage of the rats to curb unlawful trafficking of wildlife. Detection of commonly occurring cancer ailments and other degenerative neurological maladies such as Alzheimer’s and Parkinson’s can be accomplished with the help of these smart rodents. In disaster-struck zones, HeroRATs can serve to locate and save victims buried under the rubble.