Hashima Island: A Once Bustling Japanese Metropolis That Now Reminisces Its Hauntingly Tragic Past History has been witness to a lot of prosperous towns and flourishing cities in the world, which have now been rendered uninhabited. Ghost towns (or cities), as people like to call them, these abandoned places have always left behind tales of tragedy that the modern world finds very intriguing. One such ghost town is located off the Southern Japanese city of Nagasaki called Hashima Island, which is one of the other 505 deserted places in the whole of Nagasaki Prefecture.

Hashima Island goes by the name Gunkanjima in Japanese language, where gunkan in English translates to ‘battleship’ and jima or shima means ‘island’ in English. The shape of the island, officially called Hashima, resembles the Japanese warship Tosa and so the name gunkan-jima or Battleship Island came to be associated with it. Situated approximately 15 kilometres away from Nagasaki port, Hashima Island has many haunting memories that former residents now have to share with the world. But long before the island wore a deserted look, it was home to some 5,300 odd people, making it one of the most densely populated places in the world at that time. Spreading across 61,000 square metres, the island thrived during the early 1800s, when undersea natural coal reserves were found to be in abundance surrounding the island. 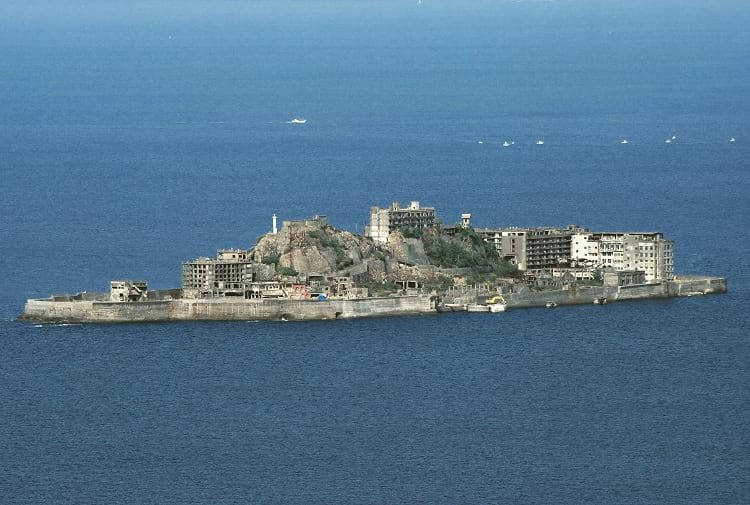 Hashima Island is sometimes also referred to as the warship island. (mahlervv / Panoramio)

Gunkanjima is surrounded by a high-standing, steel reinforced concrete seawall, which protected it (and still does) from the regular, powerful typhoons in the middle of the ocean. The silhouettes of concrete buildings dotting the entire island, which were constructed for families of labourers, give it the look of a warship from a distance. The island measures approximately 480 meters in length and is 150 metres wide. Nature has now taken its course and covered some of the concrete structures, but the dilapidated buildings and belongings of the residents still remain to tell their shocking stories, perhaps best left unheard. 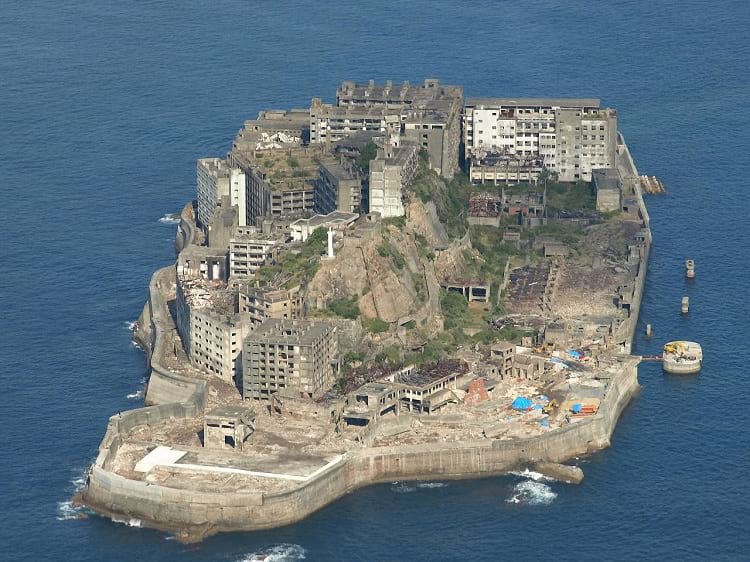 The mining operation at Hashima Island

Although coal was first discovered deep beneath the seabed surrounding Hashima Island in the year 1810, industrial mining began only in the late 1800s. The first inhabitants landed on the isle in 1887 and three years later in 1890, corporate giant Mitsubishi Mining Company purchased the island and took control of it for coal mining purposes. Mitsubishi Corporation’s coal mining operation lasted successfully for more than eight decades, even surviving two major world wars. But soon enough, the coal reserves started to deplete during the 1960s and also due to the rise in the newly-accepted petroleum products, Mitsubishi announced that the mining operation would be closed down. And so in the year 1974, Hashima Island was abandoned with people returning to the mainland one after the other, leaving their belongings as they were where they still lay untouched.

Early occupancy and abandonment of Hashima

Initially, when Mitsubishi started the coal mining process, it began ferrying labourers to the island and back to the mainland. But the daily tiresome procedure gave way to sweeping changes and Mitsubishi Corporation decided to build housing facilities for families of the labourers on the island itself to make it easier and more convenient. Work was in plenty and miners were willing to stay back on the island with their families and so the plan of expansion materialized. A lot of concrete residential places and many industrial buildings quickly started cramming the entire island. Hashima was complete with schools, cinema halls, shops, sports facilities, hospitals, graveyards, temples, swimming pools and even separate playgrounds for children. 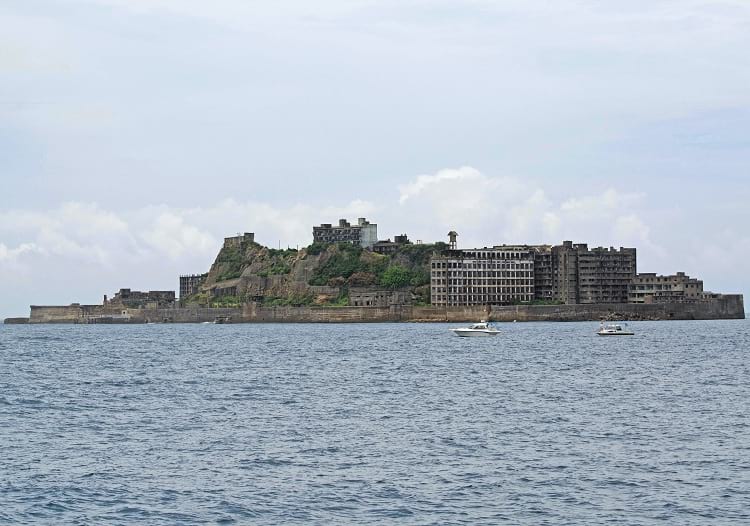 As the company steadily flourished, Mitsubishi not only provided for people’s living but made food, water and electricity available to them at no cost. The residents only had to take turns cleaning and maintaining public places on the island. People had job security and a source of income to run their families and life was easy on the island. But soon it all fell on desperate times. An ordinary high ocean wind would send the residents into periods of misery. They depended on the outside world for everything, right from food, clothing and fresh water to other daily necessities and storms would prevent ships from sailing into the island with supplies. The lack of indigenous vegetation and soil, too, prevented them from growing vegetables on the island, which changed in 1963, when soil was brought in from the mainland and citizens on the island could then cultivate and start eating their own produce. 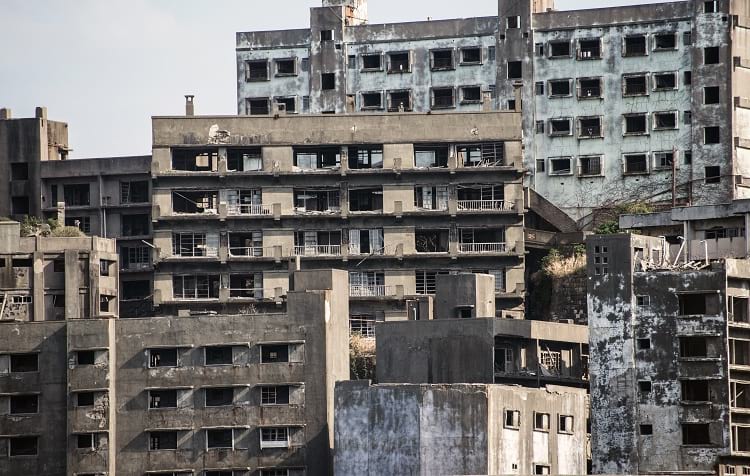 Close up photos of the abandoned buildings in Hashima Island. (ajari / Flickr)

The ghost island might now look like it had been in the middle of a catastrophe, but that was never the case. The island was not abandoned overnight but the telltale signs look like it had been emptied all at once. Dusty bicycles still lean against the walls where they were parked inside homes, along with personal pictures on walls, bottles, kitchenware and electrical appliances gather dust as they lay rotting away. At school, stationary and writing equipment lay scattered near the broken desks and benches, all covered in dust. Buildings look like they might crumble anytime, while playgrounds with broken rides seem to wait for children to return. Former residents claim that when Mitsubishi Corporation had decided to shut shop at the island, it had promised the inhabitants work on the mainland, which would be purely based on a first-come-first-serve basis. That is how people left the island with most of their belongings where they were in a bid to get a job closer home in the city.

Hashima Island has become a very famous tourist spot now, but back in the day, it was shrouded in mystery and had a dark past with heartwarming stories. During Mitsubishi’s booming industrial coal mining stint, World War II had broken out and there was no way the company was backing out of such a lucrative deal. With many Japanese youths gone away to join the armed forces against the Allies, Korean and Chinese citizens were brought in on the island in large numbers to fill in for them. These ‘foreign citizens’ were brought in as wartime labourers and forced to work at the undersea coal mines, where they had to endure a lot of hardships.

Former workers, who were very young at that time, say that the conditions in the mines were very exhausting and thegruellingg schedules included them to endure heat, humidity and extreme temperatures inside the excavation sites. The ceilings of digging places hung very low and workers had to bear excruciating pains while they crouched down to mine. The food provided was only two handfuls of poor quality rice balls, which they had to make do with on a double shift. Labourers were sometimes even subjected to beatings in case they tried to relax. A building in Hashima Island, 1930. (Series of Japanese geography and folk culture: Vol.13)

As per local records, as many as 1,300 Korean and Chinese citizens, who were made to suffer slave labour at the mines, died between 1925 and 1945 due to some or the other tragedy at the island. Some died in underground accidents, others due to illnesses and some more due to malnutrition and exhaustion. Some others even tried in vain to escape by jumping over the seawalls into the ocean below. Former wartime slaves from Korea and China later demanded compensation and reparation charges from Mitsubishi Corporation but the company insisted that all demands had been met by signing of the postwar treaties.

After the island was left with nothing but ruins, it was shut down entirely only to reopen to the public officially in the year 2009 as a tourist place. A host of private companies ferry visitors to Hashima Island from Nagasaki Port on a two-way boat trip that takes approximately two hours in total. Sightseers are only allowed to take a 45-minute-long tour on the southern side of the island from three observation decks installed. Tourists are forbidden from straying too close into the ruins for risk of buildings collapsing any time. During rough weathers, landing on the island is not allowed and sometimes, boats do not operate or ferry passengers at all.

Despite the island’s gloomy past, Japan pushed to include Hashima Island into the list of UNESCO’s World Heritage sites in 2009. It justified that the island marked the country’s industrial revolution but Korea opposed the inclusion stating that the site was nothing more than a disgraceful place where forced labour was carried out. After a lot of pushing and pulling, through a compromise between the two countries, Hashima Island was finally included in the coveted list at a World Heritage Committee in Germany in 2015. It was here that Japan accepted its murky truth and confirmed what Hashima actually faced over all those years.

Recently, the island was featured in the James Bond movie ‘Skyfall’, which brought it into prominence across the world. But the objectionable business that Japan carried out in the name of coal mining still makes people shudder. Those that experienced life on the secluded island for decades might never be able to rub off the haunting memories of their past, but Hashima Island stands in decrepitude, telling the tales of its once successful empire.

Enjoyed this article? Also, check out “Thilafushi: The Good, Bad and Ugly of the Garbage Island of Maldives“.

Previous Article
P. T. Barnum: The Colourful Life of the ‘Greatest Showman’ to Have Lived
Next Article
Sailing Ships: A Brief History Into the Beginning and End of Plain Sailing of the Ancient Boats