Psychologists have always pondered over the subject of love. Love may be categorized and characterized in many ways, one of which is maternal love. Harry Harlow was one of the first psychologists to understand the depth of the behavioural characteristics, in this context, exhibited by young rhesus monkeys. The characteristics studied included ‘isolation’, ‘maternal deprivation’, and then the introduction of a maternal figure which directly made way for a study of ‘dependency’.

The research conducted by Harry Harlow and a few other social psychologists proved fruitful and they could make a leap forward in terms of cognitive analysis under emotional duress. The primary objectives of Harlow’s experiment targeted two hypotheses. The first of these involved the replacement of a biological mother with a surrogate, and the second involved the study of the physiological bond between the ‘mother’ and child.

Attachment is an emotional understanding or a bond created in search of a safe place. There are various reactions to attachment exhibited in the different stages of life, and some forms of attachment need not be reciprocated.

Harry Harlow got curious about the mechanism of attachment that a newborn rhesus monkey exhibited towards its mother. The mothers were undoubtedly responsible for most of the care given to a baby monkey, yet there were some questions raised about the severity of the bond between the mother and child.

After Harlow finished conducting his experiments, it suggested quite the opposite of what psychologists had assumed about the infallible bond between mother and child. Newborn monkeys, although dependent on mothers for nutrition, preferred the comfort given by “touch”. Although separation may have had an adverse effect on the monkeys and made them behave differently, the results displayed were similar to human psychology.

Separation from the mother

To initiate the first stage of his experiment, Harlow found it necessary to separate the newborn rhesus monkeys from their mothers and render them isolated. The time for which these monkeys were isolated varied and this provided different results when they were reintroduced to other monkeys.

Since these monkeys had experienced no attachment since birth, they found it difficult to communicate and establish any form of contact. Instead, the isolation proved to have severe and diverse effects on the monkeys that made them aggressive towards other monkeys. Not only that, but it also resulted in stress-induced behaviour and anxiety, which made them rock back and forth while clutching themselves. One of the most severe effects included self-mutilation, i.e. biting themselves, scratching, and tearing off the hair on their body, thus self-harming themselves repeatedly. 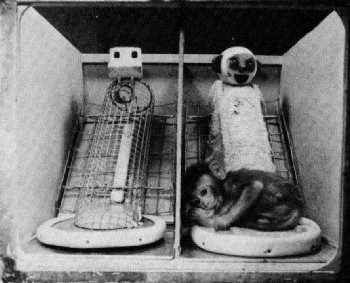 While some monkeys were completely separated from their mothers, some were placed in certain spaces where they were deceived to think certain inanimate objects adorned with clothing were the maternal figures. Two inanimate objects were placed in the enclosure, one of them was constructed with a heavy wire mesh and the other was constructed out of wood. The heavy wire mesh object had no clothing or any soft texture covering it, while the wood figure had a covering of terry cloth which provided a soft and warm texture.

There were two instances of this experiment. In the first, they marked both the inanimate figures with food supply (that is, they could dispense milk) that left the newborn rhesus monkeys to rationalize and decide which maternal figure they would opt for. In the second, only the metal figure could dispense milk.

Results from the surrogacy experiment

After extensive research on the behaviour of the monkeys, Harlow observed monkeys resorted to being with the object that had a soft texture. The monkeys felt the need for soft touch and warmth so much that even when the cloth-clad wooden figure had no nutrition to offer as the wire mesh figure did; they opted to spend time with the wooden object. It happened so, that as soon as they were done feeding from the surrogate made of mesh, they would retreat to the cloth surrogate and stay with it for the rest of the day until they required to feed again.

Harlow also conducted an experiment where he introduced new and foreign objects into the enclosure. Since they had never interacted with any other object, the baby monkeys resorted to going into the arms of the cloth ‘mother’ and cuddle for security. In the cloth-clad wooden figure’s presence, the baby monkeys were ready to explore and showed signs of development in mental health. This concluded that while nutrition is important, infants focus more on the emotional bond of attachment in the form of touch.

The sheer separation that Harlow subjected the monkeys to was considered inhumane and cruel. Not only did he deprive the subjects of their mothers, but he also subjected them to conditions of fear and a constant state of depression. These research studies had very limited value since they were conducted to understand the similarities in the working of a human brain.

Most of the monkeys subjected to these experiments not only displayed aggression towards other monkeys but towards their children too. Neurotic behaviour led them to a point where they inflicted damage to their children and continued doing so in a pattern. The research has proved somewhat fruitful in certain areas related to the cognitive abilities of human infants, but it is debatable whether the benefits reaped out of experimentation justifies the treatment the animals underwent.