Green Flash: An Incredible Meteorological Phenomenon That Occurs at Sunset and Sunrise 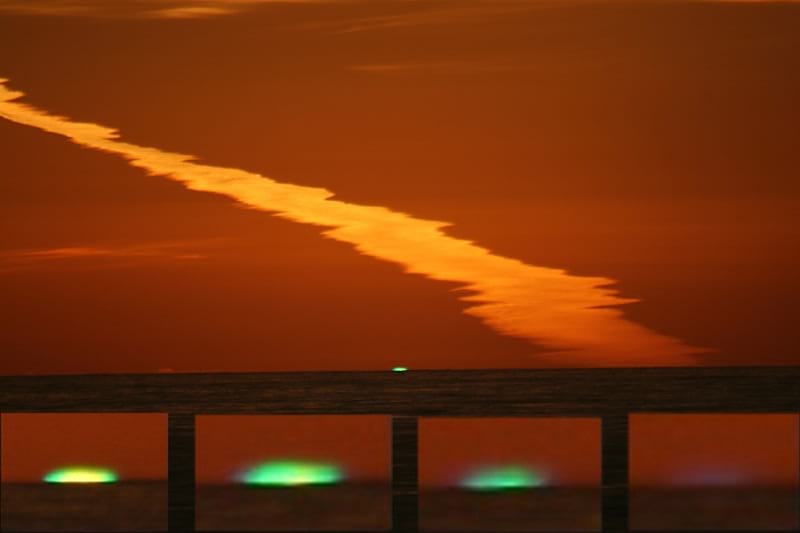 “It’s said that once you’ve seen a green flash, you’ll never go wrong in matters of the heart.”

Ever since Jules Verne included the green flash phenomenon in his popular science-fiction novels, myths about it have taken off into the wind. Although, it’s a rarity to witness this phenomenon. If you are lucky or quick, you may be able to see a green flash when the sun is setting. Sometimes, it also occurs when the sun is rising or under specific atmospheric conditions when the sun is high in the sky.

Pilots, when flying westward, have reported seeing the green flash phenomenon at the time of sunset. This phenomenon usually lasts for one to two seconds, however, Polar explorer Adm. Richard Byrd and his crew while on an expedition to Antarctica in 1929 claimed to have seen it for 35 minutes. These sights are easy to see from a mountaintop and when along the seaside due to an unobstructed vision of the horizon. 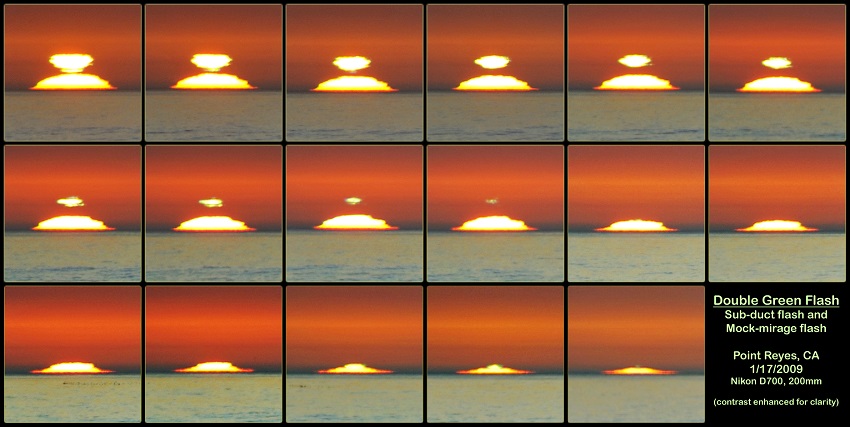 According to the American Association for the Advancement of Science, green flashes fall in four categories:

Inferior mirage or I-Mir: It occurs when the water surface is warmer than the air right above it. The inferior mirage flash that you see then is oval and flat and lasts around one to two seconds.

Mock mirage or M-Mir: Mock mirage flashes appear higher up in the sky and when the water or earth surface is colder than the air above it. One will see these green flashes as thin strips coming off the sun. They, like Inferior Images, only last for about one to two seconds.

Subduct flash: Subduct flashes are quite rare and occur due to the atmospheric inversion phenomenon during which the sun appears to take on an hourglass shape. It happens when cold air and moisture get trapped near the ground level by a warm air layer. The green subduct flash then appears at the sun’s top region. It lasts for about 15 seconds.

Green ray: A green ray is a comparatively rarer phenomenon. It usually occurs for a second, right after the sun has set, with a green ray emanating up a few degrees from the green flash up. It only occurs if the inferior mirage, mock mirage, and subduct flash are brighter than normal, and the atmospheric conditions are hazy.

Why the green flash phenomenon occurs?

When the light from the sun reaches the earth, its atmosphere acts as a prism and separates the light into different component colours. The colours with shorter wavelengths, such as blue, green, and violet, have stronger refraction than those with longer wavelengths like orange, red, and yellow. 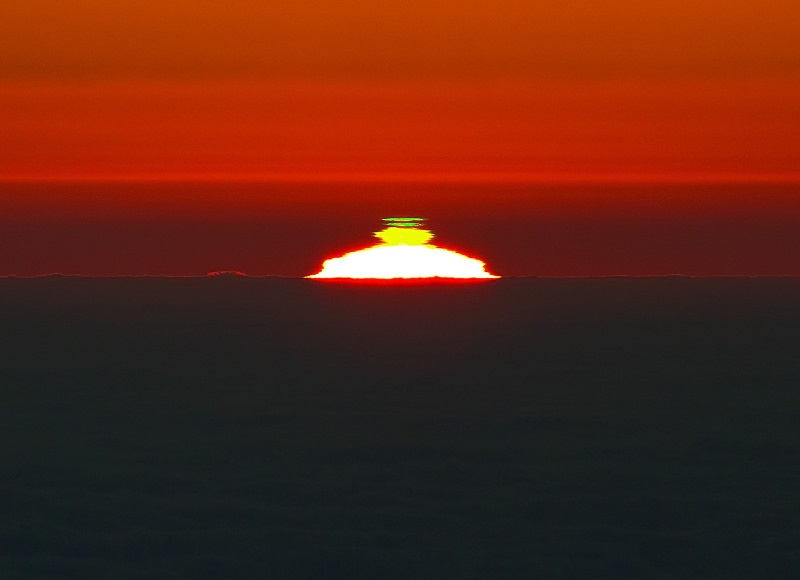 As the sun dips below the horizon, the atmosphere absorbs the orange, red, and yellow colours and scatters the blue and violet light colours. That leaves the green light colour, and that is why it is visible when the sun is setting or rising. And due to the layering of the atmosphere caused by temperature differences, the green flashes appear as ripples from high elevation points like mountaintops.

Photographs of the green flash phenomenon

The first colour photograph of the green flash phenomenon is from 1960, and a photographer named D.K.J. O’ Connell took it. At the time, he was at the Vatican Observatory to observe the sunset. Since then, various people have managed to photograph or video this phenomenon.

Green & red rims of the sun

Green rims about the sun are more common than green flashes. They are prominent at the time of sunset and sometimes transform into a green flash and back, but are difficult to see with the naked eye. Using a binocular or telescope for viewing is not advisable as they are harmful to eyes. One may see it safely, though, if projected as a magnified image on paper. The green rim grows fainter and is overpowered by the red rim as the sun touches the horizon. 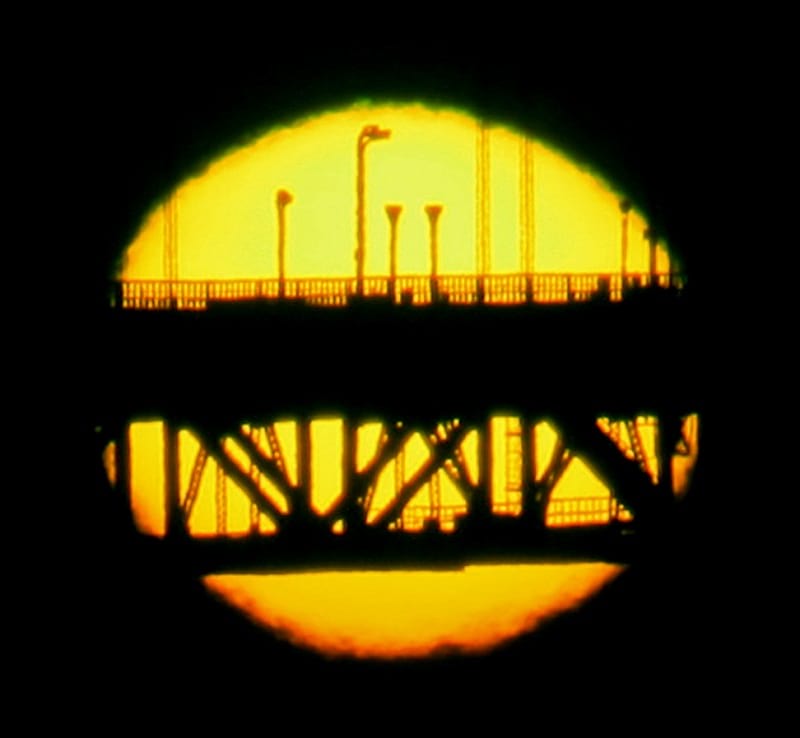 As you might expect with one of the many amazing natural occurrences that have intrigued people over the centuries, the green flash phenomenon has figured prominently in popular culture. The famous science-fiction writer, Jules Verne, mentioned the phenomenon in his 1882 novel, The Green Ray, as well as in his 1905 book, The Lighthouse at the End of the World. Other novels that mention it include Victoria Holt’s Pride of the Peacock from 1976, William S. Burroughs’ Cities of the Red Night from 1981, Carl Hiaasen’s Flush from 2005, and Elizabeth Wein’s Code Name Verity from 2012.

Many musicians have also found the green flash to be inspirational. In 1916, Mario Castelnuovo-Tedesco composed II Raggio Verde, op. 9, a piano solo that expounded upon the emotions arising from seeing the phenomenon. Much later, in 1991, Gavin Bryars debuted his orchestral composition, The Green Ray.

The films that feature the green flash phenomenon or use it as a plot device include Pirates of the Caribbean: At World’s End from 2007 and Blue Lagoon: The Awakening from 2012. It also appears in episode 982 of the Pokémon Sun & Moon anime.

So, if you plan on seeing the green flash. Wait for a clear, cloudless, and haze-free day, and keep your eye on the distant horizon. Even if it doesn’t make you an expert in sentimental matters, you will be in the lead when it comes to the meteorological ones.

Caution: Since looking at it with the naked eye is likely to harm the eyesight, one should be precautious and see it through a regular camera or a video camera lens.

Previous Article
Nixon’s Pyramid: The $6 Billion Safeguard Program Which Lasted One Day
Next Article
Anton LaVey: The Man, The Myth and The Devil