January 15, 1919, witnessed the disruption of hundreds of lives in a matter of a few minutes causing irrevocable damage. A large storage tank of fifty feet height and ninety feet width, filled with 2,300,000 US gallons (8,706,447 litres) of molasses burst open into the streets near Keany Square, at the Purity Distilling Company. With an approximate speed of fifty-six kilometres per hour, the molasses crashed into the lives of hundreds of people at approximately 12:30 pm in the afternoon. 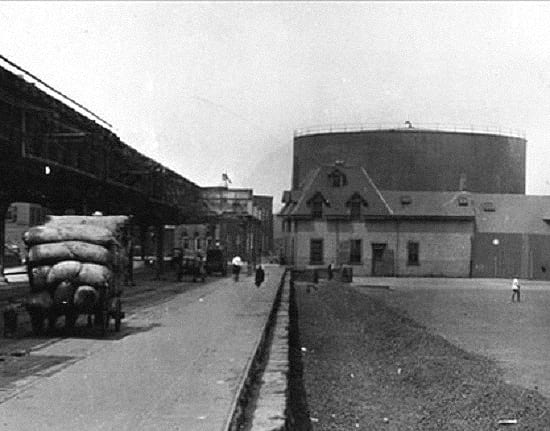 Molasses tank before the disaster. (The Bostonian Society)

Investigations into the matter revealed a much more complex background to what had appeared to be a mere vehicle malfunction. The tank was transporting the molasses to the purity plant which is located in between Willow Street and Evereteze Way in Cambridge. The molasses were required to make alcohol and munitions by the company; United States Industrial Alcohol. Industrial alcohol was in high demand during World War I.

As a result, in order to meet the ever-increasing demand, compromises were made in the business. The by-product of this compromise was inefficient tanks that ultimately caused this horrifying disaster. Since construction was rushed without much attention to detail, the tanks were ill-equipped with transportation of such large amount of molasses. The tanks often made strange noises and leaked molasses on to the streets when in transit. Complaints from employees about potential hazards fell on to deaf ears and complete inconsideration. Nobody seemed to be bothered about the lives that were at risk or the magnitude of the potential disaster.

It was quite a regular day in Commercial Street (Boston), as claimed by the records when describing the calm before the storm that engulfed the city. Right at the moment, all hell broke loose, it was said that the sound of the pouring sweet syrup was similar to that of gunfire. It made the buildings

“cringe up as though they were made of pasteboard.”

There were three children in close proximity to the tank: Antonio, his sister Marie, and their friend Pasquale, gathering wood for their homes. All these lives came to a roaring halt by the sound of the burst tank bleeding molasses into the streets. A firehouse was completely wiped out by the cascading fifteen-foot wall of syrup. It even managed to hurl a truck into the Boston Harbour. Stephen Puleo in a report in Boston Post explains,

“Molasses, waist deep, covered the street and swirled and bubbled about the wreckage…. Here and there struggled a form—whether it was animal or human being was impossible to tell. Only an upheaval, thrashing about in the sticky mass, showed where any life was…” Rescue operations arrived immediately but the molasses made it quite difficult to rescue people. The low temperature in Boston at the time was, unfortunately, conducive to hasten the cooling of the molasses. The victims were trapped and suffocating within the sticky, and quickly solidifying, mass. The first to arrive at the scene were a hundred and sixteen cadets from USS Nantucket, followed closely by the Boston Police, Red Cross, Army and Navy personnel. While some of the nurses dove into the molasses to help the trapped, others tended to the injured, all working tirelessly through the night. Volunteers searched for and tried to rescue victims for about four days straight. Makeshift hospitals were built to swiftly tend to the survivors. 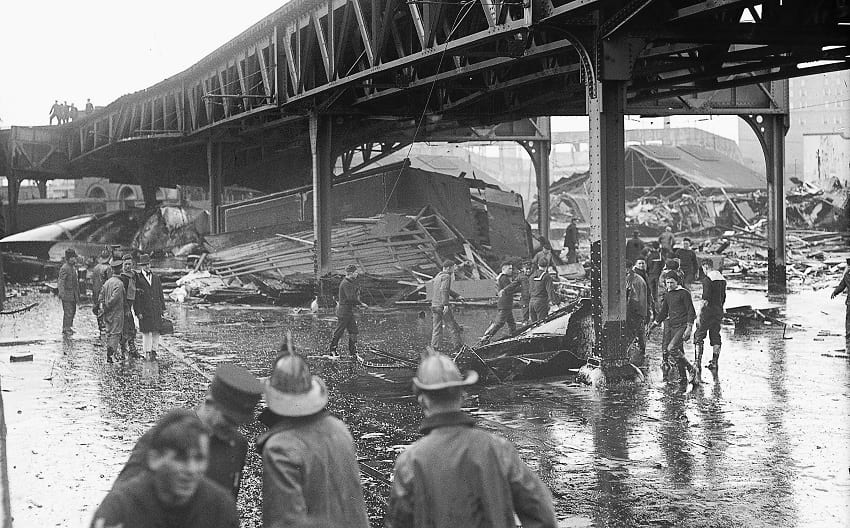 The aftermath of the Great Molasses Flood. (Wikimedia Commons)

Boston once again returned to its usual state of affairs, though it took time and perseverance. The citizens banded together to clean up the streets using saltwater along with sand, taking weeks of scrubbing. The environmental damage was unimaginable, rendering the Boston Harbour choked up. United States Industrial Alcohol Company was in possession of the Purity Distilling by 1917 making them equally liable to the disaster. Local residents filed a class-action lawsuit against the company which deserves three cheers for being a major milestone that paved the way for modern corporate regulations. The company tried to navigate their way out by blaming the blast on “anarchists” but they failed and were made to shell out about $628,000 in damages—the equivalent of around $8 million today, with compensation of $7,000 to relatives of each victim.

This tragedy has successfully managed to seep into local folklore. A common rumour still prevalent in the region is that the area still smells of molasses, apparently, on hot summer days. Although the residue of the sticky substance has been rubbed into non-existence, spots of molasses can still be seen on a plaque at Commercial Street and Copp’s Hill Terrace that marks the point where the tank had burst apart. It birthed the famous tag line, “Everything a Bostonian touched was sticky.”

Thanks to innumerable visitors on-site, they carried the molasses with them everywhere they went. While undoubtedly a horrifying accident, the Great Molasses Flood nevertheless evokes a sense of ludicrousness at the situation.

Previous Article
Japanese Kamikaze Pilots: Transcending Life and Death for their Country
Next Article
Goblin Shark: The Alien Shark of the Deep Sea, with a Slingshot Mouth