Going Public: A Guide to the Wild World of Securities and Investments 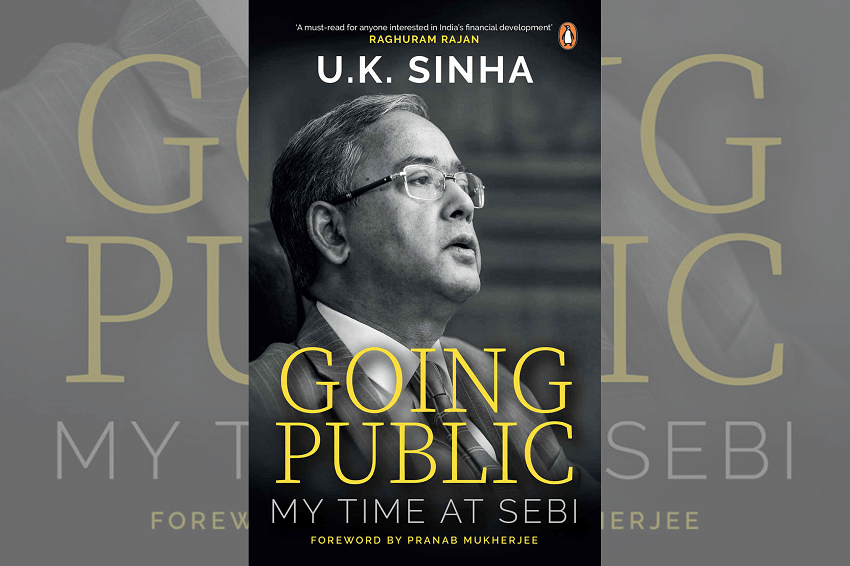 Remember the heady days of Harshad Mehta turning share market upside down? His protégé Ketan Parekh following in his footsteps? The stock market crash in the early nineties? Going Public written by Upendra Kumar Sinha, the former chairman of Securities and Exchange Board of India (SEBI) is a window to that period, and much more.

“Since I had a lot of free time on my hands, I prepared a comprehensive evaluation of different interventions and proposed structural changes, which others at this desk had not cared to do in the past.”

As a Managing Director of Bihar State Credit and Investment Corporation Ltd (BICICO), in 1989 and Joint Secretary (Banking) in 2000, U K Sinha got grounded on how public funds were monitored by the state administration. Transformation of ICICI bank into a universal bank was his first landmark achievement. In July 2002, he took over as Joint Secretary – Capital markets. In Oct 2005 he took over as chairman of Unit trust of India Asset management company (UTI AMC), and had a hands on feel of how the mutual fund schemes of UTI, in which investors and reposed great faith, collapse all of a sudden.

“Thus, when the crisis developed in 2001, it came to light that the government had no mechanism for timely and first-hand knowledge.”

The first thing that the author noticed was lackadaisical state control on the regulatory bodies. There was no mechanism in place for a timely warning of a crisis in a financial institution. UTI had strayed into activities inconsistent with its core competence; this couldn’t be spotted in time. So, for better control on the securities market, the SEBI (Securities and Exchange Board of India) Act was amended time and again to plug existing loopholes.

“…destiny had planned my deep and intensive association with UTI in multiple capacities.”

The author’s appointment to UTI AMC and his subsequent joining of SEBI was challenged by a slew of Public Interest litigations (PILs). Petitioners alleged that Mr Sinha was working closely with two finance ministers, and hence couldn’t be trusted to protect the interest of common investors. But the author came clean on all allegations.

“…the general principle of post economic reforms (was) that the government should distance itself from day-to-day running of financial institutions.”

The author feels that financial literacy in India is extremely poor. That’s why a common man can be easily taken for a ride. A multiplicity of regulatory authorities, and jargon of rule book, makes it difficult even for the highly educated to gauge the veracity of saving schemes. Hitches that follow the transfer of power after the general elections add to the burden of regulatory bodies, affecting the common man.

“a statutory SEBI could not be created until 1992. It required a Harshad Mehta scam ……”

The focus of the book is later shifted towards the long drawn out, and yet to be concluded, case of the Sahara group. The group had raised money from the public in gross violation of the law. Following this disclosure, SEBI directed 2 companies of this group to refund the money of around 3 crore investors. With Sahara group defying SEBI directions, the matter went to court. Supreme Court, in 2012, ruled in favour of SEBI.

“During the Ketan Parekh scam, it was discovered that some Indian corporates and operators in the market took their ill-gotten wealth out of the country and used the same money to invest in companies through the PN route, thereby manipulating the market.”

Sahara was asked to deposit related records and documents in 10 days’ time, i.e. by 10th September 2012. These were sent to SEBI office in a truckload on the 10th, at 8 PM. SEBI office had closed by that time, hence the truckload was not received. Dodging tactics of Sahara continued. Their investors were flocking to branch offices, hence they were forced to pay them directly, said the Sahara group. SEBI took exception to this and filed another petition in Supreme Court.

“In the nineties, SEBI was new and still evolving, and relatively inexperienced.”

The unauthorized collection of public money in India was at its peak in 1990. Accordingly, the government, the regulators, geared up for course correction. However, the entire money collected by the unscrupulous houses hasn’t been returned to the investors. This calls for a serious debate on the subject and a pan India drive to educate investors.

The book is a treat for the seasoned investors and a guide for those not-so-well acquainted with share market and the working of the financial institutions.