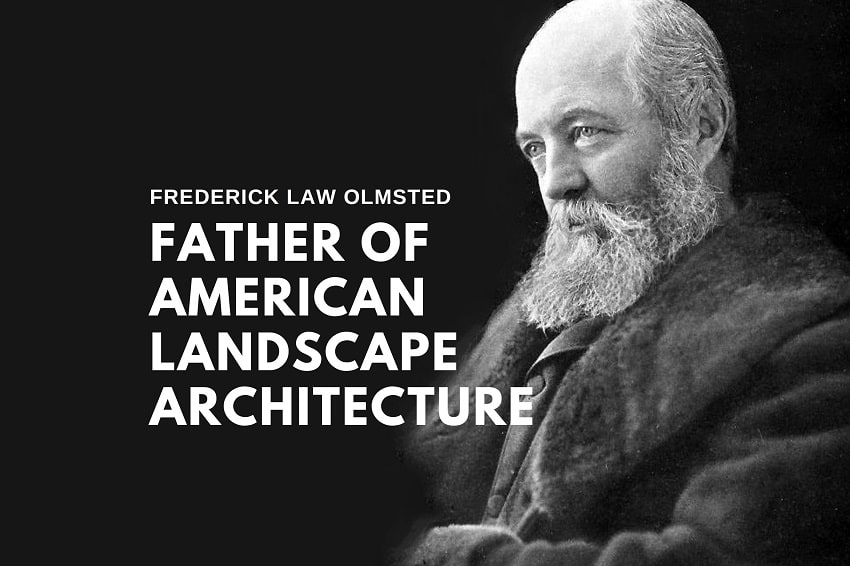 As one of the foremost landscape architects in the United States, Frederick Law Olmsted is often described as the father of American landscape architecture. Together with his partner, Calvert Vaux, he was involved in designing more than 500 iconic parks in the country, including Central Park in New York, the Boston Park System, and the Buffalo Park System.

Although Frederick Law Olmsted later became a towering figure in the landscape design arena, he had no formal training in that sphere. In fact, he did not even attend college. Most of his design learning happened on the job and from his extensive travels around the United States and abroad in Europe and China. He read widely and was influenced by the works of Johann Georg von Zimmermann, John Ruskin, William Gilpin, Humphry Repton, William Shenstone, and many others.

His unique design ideas also came from his intrinsic aesthetic sense and a deep love of nature that he had inherited from his father, John Olmsted. Growing up in Hartford, Connecticut, he had spent many of his childhood holidays travelling with his father in the picturesque locales of the North-eastern United States. Later, as an adult, he travelled in Europe and the formal gardens and parks he saw there made a great impression on him.

What set Olmsted apart from contemporary landscape designers was that he wasn’t merely focused on creating a visually appealing landscape. He wanted to design landscapes that moved the emotions of visitors and provided them with restorative relief. Towards this goal, he applied psychological principles to his landscape design.

Born on 26 April 1822, in Hartford, Connecticut, Frederick Law Olmsted belonged to a well-off, upper-class merchant family. He was a creative, hard-working student and, after graduating in 1838 from Phillips Academy, he intended to attend Yale College. However, his eyesight was affected by sumac poisoning and he had to give up on his college plans. He did attend a few science and engineering lectures at Yale after his eyesight improved, but he never took a formal degree.

For a few years, he tried his hand at different professions. He joined the merchant navy and worked for a year as an apprentice seaman, travelling all the way to China. He next managed a dry goods store for a while in New York. Later, in January 1848, his father helped him acquire a 125-acre farm Staten Island’s southern shore, and he named it Tosomock Farm and settled there until 1855 to practice agriculture.

In 1850, he took six months off to go on a walking tour in Europe with his brother and some other friends. His travels inspired him to write his first book ‘Walks and Talks of an American Farmer in England.’ Published in 1852, the book was well-received, and his descriptive writing skills brought him to the notice of the New York Daily Times.

After his farming enterprise went bust, the newspaper commissioned him to act as their correspondent in the Southern Confederate States. He travelled extensively and sent back insightful accounts of the local culture, farming, horticulture, gardening, and institutionalized slavery in those states. His report led to three books—A Journey in the Seaboard Slave States, published in 1856, A Journey Through Texas, published in 1857, and A Journey in the Back Country in the Winter of 1853-4, published in 1860.

In 1857, Olmsted became the Superintendent of Central Park in New York. He gained this position through the connections he had made while working as a journalist. He formed an acquaintance with the prominent landscape architect, Andrew Jackson Downing, and, through him, met the English architect, Calvert Vaux. Impressed with Olmsted, Vaux asked him to collaborate with him.

Together, they designed a landscape architectural plan called Greensward and submitted it in the Central Park design contest. The selection committee picked their design as the winning choice in 1858.

It was an auspicious start to a successful partnership that lasted until 1872.

Olmsted worked on the Central Project until 1861. At this point, he took leave of absence to serve with the United States Sanitary Commission as executive secretary. In this capacity, he was responsible for treating the Union army soldiers during the American Civil War. He left this position in 1863 to work as a manager at the Mariposa Estate, a gold mining venture near San Francisco in California. After that operation went bust, Olmsted returned to New York to rejoin Calvert Vaux and resume work on landscape design projects.

Between 1865 and 1873, they designed Prospect Park in New York. They also designed the Riverside community in Chicago. Other landscape design works included the park system in Buffalo between 1868 and 1876 and, in 1887, the Niagara Reservation at the Niagara Falls.

In 1883, Olmsted moved his family and his landscape architecture practice to Brookline, Massachusetts. He worked on designing the Emerald Necklace park system in Boston as well as the campuses of Stanford University, Smith College, the University of Chicago, and Wellesley College. He also designed the structures for the 1893 World’s Fair in Chicago and created eye-catching white fairground buildings in the Beaux-Art styles that won him much acclaim.

Rather than impose a pre-decided concept on a place, Olmsted was prone to studying the area’s natural features and planning his landscape design around these. All the elements in the landscape had to be subordinate to the whole picture, without standing out just for the sake of it. The plants and trees had to be natural to the region, non-invasive, low-maintenance, and planted in a natural manner. He did not favour ornamental groupings.

Due to this, there was nothing artificial or forced about his designs. Furthermore, thanks to the design simplicity and lack of unnecessary distractions, people didn’t consciously notice the design work. Rather, they felt so naturally immersed in the landscape that the experience was both soothing and restorative. It was exactly the effect he wanted.

The rapid growth of industries had led to an influx of workers from rural areas to the cities to work in the factories. That, predictably, created problems like overcrowding, unsanitary conditions, and spread of disease. It also led to civic problems such as social unrest, violence, labor strikes, government corruption, economic depression, and disease.

To address these issues and change the dismal state of the cities, many upper-middle-class women formed civic improvement societies between 1893 and 1899. Assuming that improving the living conditions would improve public morality, they proposed creating orderly cities with adequate water supply, proper sewage systems, and reliable urban transportation. They also wanted the cities to have open green places that would offer psychological relief to the workers who worked long hours indoors in the factories and, moreover, didn’t earn enough to afford vacations to the countryside.

Many US American cities, including Washington D.C., San Francisco, Detroit, Chicago, Denver, and Dallas, adopted the City Beautiful principles in their city planning.

Inspired by the City Beautiful Movement, Frederick Law Olmsted attempted to create soothing, restorative landscapes. As long as he could achieve that purpose, he wasn’t bothered about deviating from the then-prevalent tastes and fashions. It was on account of this originality that his landscape architecture has endured so well over the years.

His failing health forced Olmsted to retire in 1895 and leave his firm to his sons; their successors kept the firm going until 1980. As his condition deteriorated, Olmsted was admitted to the MacLean Hospital in Waverly, Massachusetts, and spent his last days gazing out on landscaped grounds that he had himself designed. He died on 28 August 1903, aged 81.

Enjoyed this article? Also, check out “Amazon Spheres: An Unexpected Rainforest in the Amazon HQ at Seattle“.

Previous Article
Brief History of Cricket: From a Suburban Pastime to a Gentleman’s Game
Next Article
Golden Bridge: The Connect to the Past and the Future of Vietnam