The Ghost Ship, the Flying Dutchman: A Parable or an Illusion, Fata Morgana? 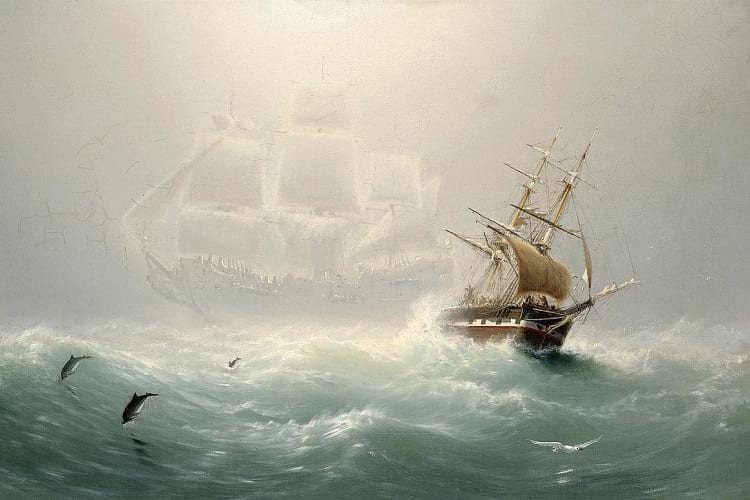 The Flying Dutchman refers to a ghost ship that sails the oceans and has been sighted by many sailors throughout history. Legend has it that the ship was cursed to never be able to reach land and sail endlessly in the oceans.

The vast oceans that surround us are deep, dark and mysterious; much like the superstitions and myths attached to marine travels. There are many unexplained phenomena while traversing the waters that have led to false notions and weird beliefs being fostered. The Flying Dutchman is one such story, so strongly believed in, that it is said to be an omen of disaster for those who sight it.

Another theory states that the captain and the crew of the ship were involved in devious and reprehensible activities onboard, for which they did not ever come out of the storm and were cursed to sail indefinitely.

Sailors have reported of these sightings for years claiming to see the creepy apparition of the ship which sometimes forces other ships astray or leading them to a collision. Others have spoken of tales of being contacted by Captain Hendrick Van der Decken upon nearing his ship, to send letters or messages to people on land who are long dead.

The man, the myth

According to folklore, the ghost ship belonged to Captain Hendrick van der Decken, which sank in 1641. The Dutch captain had embarked upon a dangerous voyage from Holland to East Asia for procurement of exotic spices and other profitable goods. After acquiring the merchandise to his heart’s desire, he set course to Amsterdam. As the ship approached Africa, the captain thought of docking near the Cape of Good Hope and establishes an outpost for his employers, the Dutch East India Company, to break journey during their oceanic travels.

The ship encountered a dreadful windstorm as it rounded the Cape which was infamous for oceanic storms and perilous rock formations. The strong winds lashed at the ship ominously with the threat of overturning it. The fear of drowning at sea compelled the sailors to implore with their captain to turn around.

Based on hearsay, the captain was an adamant man full of arrogance. That night, he was either drunk or in his idiocy paid no heed to the pleas of his crew and ordered them to stay on course. As the water got into the ship and with a disaster looming, the terrified crew rebelled. The undeterred Captain Van der Decken killed the man in charge of the uprising and threw his body into the turbulent waters.

It is said that as soon as the mutineer’s body hit the water, the ship asked the captain if he wished to end up at the bottom of the ocean as well. Some say that it was the voice of the Devil that spoke to the captain that night. Van der Decken however, answered that he would be damned if he ended up there and was willing to ride the tempest till the end of the world.

The result of which was the captain being cursed to sail the oceans till the end of time with a crew of dead men becoming the harbinger of doom to all those who sight the ship. The captain unflinchingly cried, “Amen to that!” Since then, the captain has been sighted sailing his phantom ship with a dead crew and given the moniker, the Flying Dutchman.

Coining of the term, Fata Morgana

Legendary King Arthur’s half-sister, was a sorceress, renowned for causing trouble by creating illusions on water, especially in the Strait of Messina between Reggio di Calabria in Italy and Messina in Sicily. She would confuse sailors and sea travellers by creating multifaceted mirages over water bodies and was popularly known as Morgan Le Fey in Italian, meaning Morgan, the Fairy. As a result, the name Fata Morgana was given to optical illusions over water and is sometimes also used to describe a mirage.

A Fata Morgana can throw up the inverted image of an object, or project an upright image hanging in the air from a distance. The Fata Morgana can be of a ship, water, islands or sometimes even the coastline. Sometimes, the image seems to be floating in the sky. 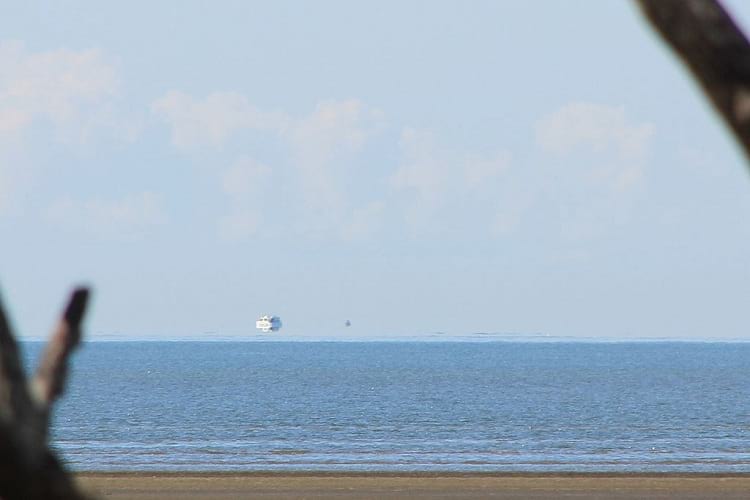 An example of Fata Morgana: A ship appears to be floating. (Timpaananen / Wikimedia Commons)

The science behind it

Fata Morgana is a scientific phenomenon which is the result of ‘Refraction of Light’. The laws of refraction state that when light passes through a matter of different densities, it refracts or bends as per the characteristics of that layer. Refraction of light causes optical illusions known as an ‘Inferior Mirage’ or a ‘Superior Mirage’. An inferior mirage is one where the illusion is created under the actual object. 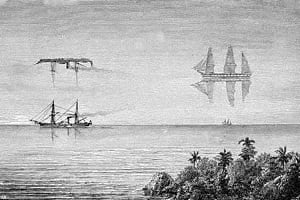 Misleading illustration of mirage from the 19th century. (Frank R. Stockton / Round-about Rambles in Lands of Fact and Fancy)

It is what is known as a mirage in the desert, where there seems to be a body of water which is actually the reflection of the sky creating a false impression of a blue coloured water body. A highway mirage is another example of an inferior mirage, when light from the sky is refracted by the hot air above a road, giving the false notion of a puddle of water.

A superior mirage is what is referred to as a Fata Morgana, experienced in a condition of thermal inversion when there is a layer of warm air on top of cold air. It is common in cold air zones and is the deduced possibility of the Titanic disaster.

During calm weathers at sea, the different layers of air above the waters recreate the formation of an object far away, floating above the line of the horizon. It can cause the image of a ship to be floating inside the waves or hanging upside down above the real ship.

Another famous Fata Morgana was near Greenland, where a ghost island was first spotted in 1907. After several failed attempts to find this island, it led to the conclusion of a Fata Morgana of the Tobias island, just north of the Nioghalvfjerd Fjord in Greenland.