Euphrates River: A Dying River that Birthed One of the Oldest Civilisations 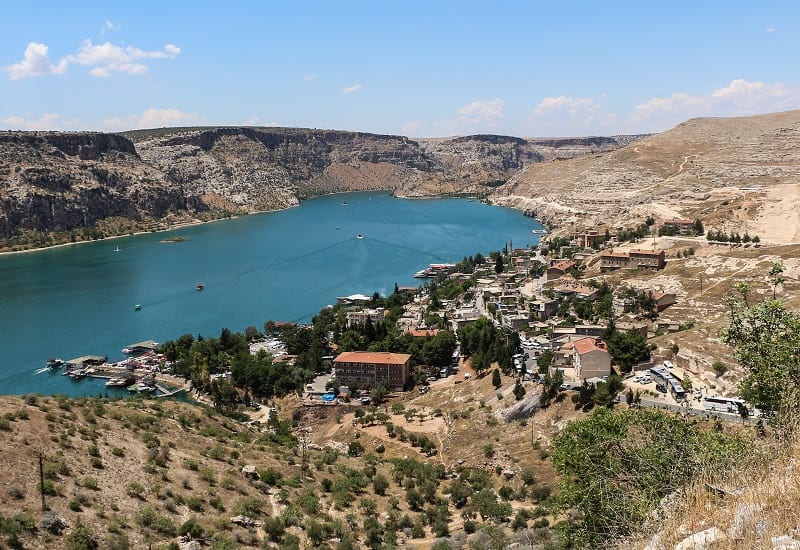 The town of Halfefi, a small farming district on the east bank of Euphrates River, Turkey. (Bernard Gagnon / Wikimedia Commons)

The Euphrates River, along with the river Tigris, are the two greatest rivers in an area that was the cradle of ancient Mesopotamian civilization. Together, the two rivers form a great river system in the Middle East. The Euphrates River is one of the most historically important and longest rivers of West Asia.

While there has been a lot of conjecture about the origin of the name of Euphrates, many believe that the name may have actually been of Kurdish origin. The Kurdish word fererehat means “wide flowing water”. A newer derivative of the same is believed to be “Ferat”. Another group of scholars is of the opinion that the word has its origins in Old Persian, where Ufratu means “good to cross over”. The Sumerian and Akkadian names for the Euphrates make the Indo-European etymology uncertain.

The formation and path of the Euphrates River

As mentioned previously, the Euphrates River is the longest river in the south-western region of Asia and covers a length of 2800 km. Along with the Tigris River; these two rivers form the Tigris –Euphrates River System. The river originates in Eastern Turkey where it is formed by the confluence of the rivers Murat and Karasu that are found in the Armenian Highlands. It flows through the Taurus Mountains to the Syrian Plateau and then through western and central Iraq. Here, it joins the Tigris River and continues flowing as the Shatt -Al -Arab, and empties into the Persian Gulf.

Three rivers that rise in the foothills of the Taurus Mountains in Syria, along the Syro–Turkish border, add their water to the Euphrates. They are the Sajur, the Balikh, and the Khabur. Although these rivers comparatively add little water to the river, they are the only natural tributaries of the Euphrates. Once the river enters Iraq, there are only a handful of canals that exist which connect the Euphrates basin and the Tigris basin. 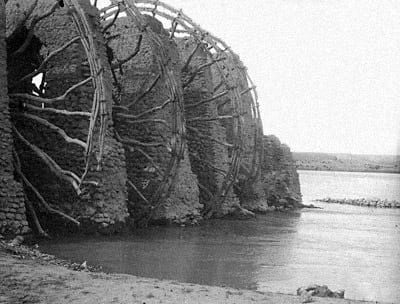 Water wheels of Ajmiyeh, on the Euphrates near Rawa, and Ana, in Mesopotamia (present-day Iraq). Circa 1911. (Gertrude Bell)

Dating from approximately the 4th millennium BC, the Euphrates was the source of water that led to the birth of the first civilization in Sumer. Several ancient cities were located on or near the riverside, including Eridu, Mari, Nippur, Sippar, Shuruppak, Uruk and Ur. It is also one of the two rivers from where Mesopotamia draws its name as the “Land between the Rivers”.

In ancient times, the river valley was heavily irrigated which formed the centres for the Babylonian and Assyrian empires in later years. For several hundreds of years, the Euphrates River formed the eastern limit to the control of Egyptian and Roman Empires, as well as the western regions of the Persian Empire. The Battle of Karbala is said to have taken place in 680 AD near the banks of this river.

After the First World War, the Ottoman Empire was partitioned when the Southwest Asian borders were redrawn in the Treaty of Lausanne (1923). According to this treaty, the three ‘riparian states’ of the Euphrates River, indicating Turkey, France (mandate of Syria) and the United Kingdom (mandate of Iraq), were supposed to reach a mutual conclusion about the use of the water of the river, as well as any constructions of a hydraulic installation. Turkey and Iraq signed an agreement in 1946 which gave Iraq the power to construct dams on Turkish land and control the flow of the Euphrates. The agreement also stated that Turkey had to report Iraq about any hydraulic changes that it made on the river system of the Tigris-Euphrates.

Climate, vegetation and natural history of the Euphrates River

To the north of the Persian Gulf lies the huge floodplain of the Karun, Tigris and Euphrates rivers that have marshes, permanent lakes and forests. The climate in this subtropical area is hot and dry. The areas around the Tigris and the Euphrates are extremely fertile.

There has been a constant decrease in the annual rainfall which determines the type of vegetation that the area can support. The river flows through several vegetation zones that are found in this region. When the Euphrates flows through the southeast Turkish mountains and the foothills in the south, ‘xeric woodland’ is observed. The most plant species include oaks, pistachio trees, rose plants and plum plants. There are several wild varieties of cereals that are found like, oats, rye, emmer wheat and einkorn wheat. To the south of this, the Euphrates flows through a steppe landscape which is characterised by plant species like white wormwood and Chenopodiaceae.

According to research, the Euphrates Valley probably supported a riverine forest, and significant features of this forest comprise of the Oriental plane, the Euphrates poplar, the Tamarisk, the ash and several other wetland plants.

Several animals like the gazelle, onager, and the Arabian ostrich (now extinct) are believed to have been inhabitants of the steppes on the border of the Euphrates valley. The valley itself is believed to have been home to the wild boar. Other animals include the golden jackal, the gray wolf, the red fox, the leopard as well as the lion. In the mountains of southeast Turkey, the Syrian brown bear can also be found.

The Euphrates River in the Bible

Several religious texts have prophecies in them. Similarly, there is a prophecy in the Book of Revelation about the Euphrates River. According to the prophecy, in the ‘near future, the Potamos Euphrates… will dry up in preparation for the Battle of Armageddon’… “And the sixth angel poured out his vial upon the great river Euphrates; and the water thereof was dried up….”

Islamic prophecies about the Euphrates River

Like the Book of Revelation in Christianity, there are Islamic prophecies in some of the hadiths of Prophet Muhammad that also suggest that the Euphrates River will dry up. It also says that once the river dries up, it will reveal unknown treasures that will eventually lead to conflict and war across the world.

The River Euphrates under threat Due to extreme weather conditions and excessive pollution, there is barely enough water to be able to float a canoe properly. According to the Iraqi River Police, there is garbage in the water which has turned the river a murky green and the waterway sluggish. According to recent satellite study, the Tigris – Euphrates basin has a groundwater depletion rate higher than any other place on the planet, except India. Due to the high rate of global warming in the world, it is believed that an environmental disaster is likely to be encountered as the Euphrates is drying up.

Enjoyed this article? Also, check out “Pamukkale: The Cotton Castle in a Mess of Limestone and Healing Waters“. 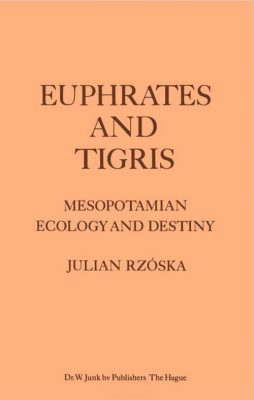 Previous Article
Schwerer Gustav: Why the Largest Artillery Gun Turned Out to Be a Flop During World War II?
Next Article
The Trans-Alaska Pipeline System – An Engineering Marvel of the 20th Century