1959: What Really Happened at Dyatlov Pass? 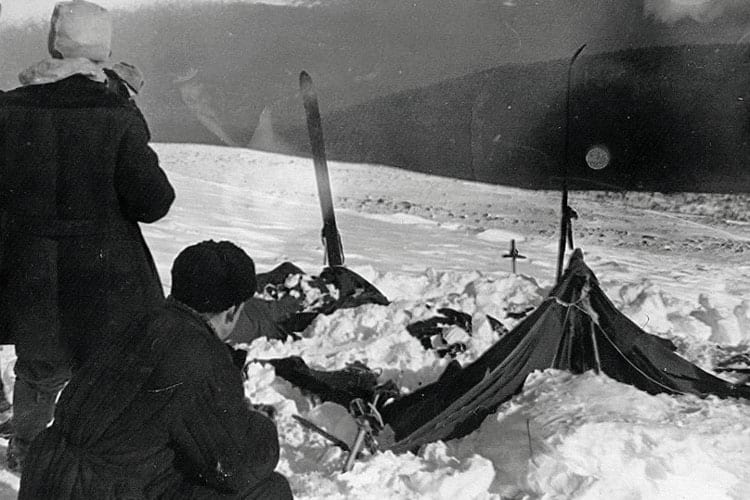 Dyatlov Pass: The camp site of the hikers after being freshly discovered. (Soviet Investigators / Wikimedia Commons)

An adventure is expected to end in a thrilling climax which makes a good story and goes down in history as a milestone. But what if the climax proves to be tragic? and becomes a story, with multiple versions. This happened in the Dytlov Pass Incident.

The story begins with a skiing expedition across the northern Ural Mountains in the Soviet Union, circa 1959.  A team of ten, eight men and 2 women, led by Igor Dyatlov. These students of engineering at Ural Polytechnic institute head for an expedition which, hopefully, would up their status from Grade 2 hikers to Grade 3. Upping of grade mandated scouting a distance of 300 Kilometers; hence the expedition to the mountain Otorten was undertaken.

But barely 10 Kilometers away from the target destination, the entire team (except for one member who abandoned the expedition due to health reasons in the initial stage of the expedition) met a fatal end in course of a grisly chain of events.

The team journeyed to Ivdel in the province of Sverdlovsk Oblast, by train, reaching there in the early morning of 25th January 1959. From there, they moved to the last village at north, Vizhai, by truck, and on 27th they began trekking towards Otorten. On the next day, one member, Yuri Yudin, suffered multiple ailments and left the expedition. Rest of the team moved on.

On 31st January the team geared up for the final climb to the top of mountain Otortem. The following day, inclement weather forced them to halt and they decided to camp before their final attempt. A camp was set up on the slope of Ural Mountain. Camping one and a half kilometer down in the forested area would have been a better choice.

Maybe Dyatlov wanted to experience camping on the mountain slope, or he was just chary of going in the reverse direction, nobody knows. 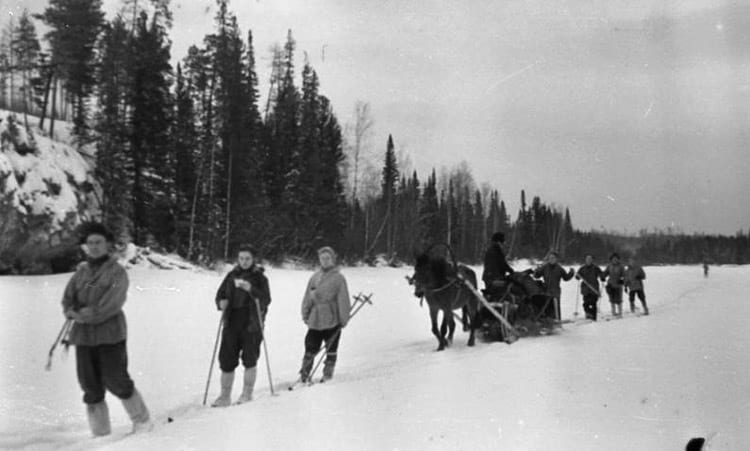 The team was expected to return to the village Vizhai by February 12th. But they didn’t and it was not a cause to be alarmed, as delays on such missions were common. But the team was not heard from even till February 20th. Search groups were pressed into action. On 26th February, the searchers found half torn and dishevelled tent in Kholat Syakhl.

Covered by snow, tent contained most belongings of the trekkers, including shoes. Outside the tent, a trail of footmarks was visible up to a distance of 500 meters, leading towards the forest area. Close to the woods, under a pine tree, were seen leftovers of a small fire and two dead bodies, almost naked, clad only in undergarments. Obviously, the two hikers made a fire in an effort to warm up in extreme cold but failed. They, along with the other three seemingly left the tent in extreme hurry, hence ill-clad. The reason could have been fear of some imminent danger.

Broken lower branch of pine suggested that attempt was also made to climb the tree. Bodies of the other three members were found at a distance of 300, 500 and 600 meters from the pine tree in the direction of tent site. Ostensibly, the trio lost their lives trying to reach out to the base tent. Remains of the remaining four travellers were found more than two months later, on the 4th of May.

Their bodies lay buried in snow, 4 meters deep, 75 meters away from the pine tree, in the direction of the forest area. They were better clothed and seemed to have disrobed their predeceased colleagues in order to thrive in the conditions of extreme cold.

Postmortem findings of the first five bodies indicated that they died of hypothermia. But autopsy findings of the remaining four were different, and that set in motion a slew of theories regarding what may have happened to the trekking expedition. Three of these bodies had fatal internal injuries, skull fracture and chest fractures, without any signs of external wound. A female member though had external wounds. Her eyes, lips (partially) and tongue, were found missing. The skin on her hand was macerated. A part of her facial tissues and skull bones was missing.  This was caused by putrefaction as the body lay in face-down position in a sub-snow stream.

Gossip, nevertheless, had a field day churning out stories. Deaths were variously described as `mysterious circumstances’. Stories, novels and movie plots on event added to the confusion and the mystery. Unidentified Flying Objects (UFO) reportedly seen around the campsite on D-day, belligerent locals revolting to an encroachment of outsiders on their habitat, secret weapon trial of Soviet Union as part of cold war built up, radioactivity, abominable snowman- Yeti, etc; all these were projected as probable triggers for the tragedy.

Low and rounded hills at ground zero (campsite) could have conned anyone to believe that it was an avalanche-free zone. Dyatlov team too believed that it would be avalanche-free. A technical nuance, that slopes steeper than 15 degrees are prone to avalanches, got overlooked. Immediately above the tent area, the slope was 22-23 degrees, and it increased to 25-30 degrees at a height of 100 meters. So clearly the area where the camp was set up was avalanche prone and avalanche did happen.

Traces of radioactive material found on cadaver clothes, very likely, from mantles (fabric bag that burns as a wick to emit light) used in camp lanterns. Burnt mantles easily pulverize and blow with the wind. Gas mantles were made of Thorium- the radioactive element detected on clothes of the dead.

The trigger to tragedy, logically, was some queer sound at night which the first five members thought was a sign of an imminent avalanche (the other four in tents may not have taken it as a sign of danger). The panicked five, cut tent canvas from inside with a knife and came out immediately, wearing whatever they wore at that point of time, and ran for safety towards the forest area. In the dark of night, one may have fallen on a rock, breaking his skull.

With hypothermia hitting them hard, they frantically made a fire near the pine tree to warm up, yet, the two of them died. The remaining three cut and undid the clothes of their dead colleagues and wore or tied them on their own body for better protection against cold, and headed towards the tent. At different distances though, they fell and died, without reaching the tent.

The other four, who didn’t panic at queer sounds, dressed up and went out searching for their five colleagues who had deserted the camp in a panic. As they searched for them, the real avalanche came and did them in. The kind of traumatic end the four of them met is revealed by the post-mortem lesions found in their bodies.

Strange orange coloured hue (some recorded it as dark tan) noted in bodies of the first five is attributed to five days’ sunburn in extreme winters. Undertaker’s cosmetic correction on the corpse to make it presentable in an open casket funeral may also be a reason behind the abnormal colour. Photo of the nine hikers on a headstone in Yekaterinburg. (Dmitry Nikishin / Wikimedia Commons)

Linking Unidentified flying objects to tragedy is an unsubstantiated correlation. Yeti (mysterious snow animal) theories fail to join dots in the story. Local inhabitants of the range may have ruffled the team, but doesn’t seem plausible. Likewise, number nine being inauspicious for the natives of the area doesn’t cut much ice.

What stands out clear and scientific is the avalanche theory, which though isn’t as popular and accepted as others related to occult and fiction.

Previous Article
Bobbie the Wonder Dog: Uplifting Story of a Separated Dog that Travelled 2500 Miles to Return Home
Next Article
Seawise Giant: The Enormous Vessel That Remains the Biggest Man-Made Ship Ever Built