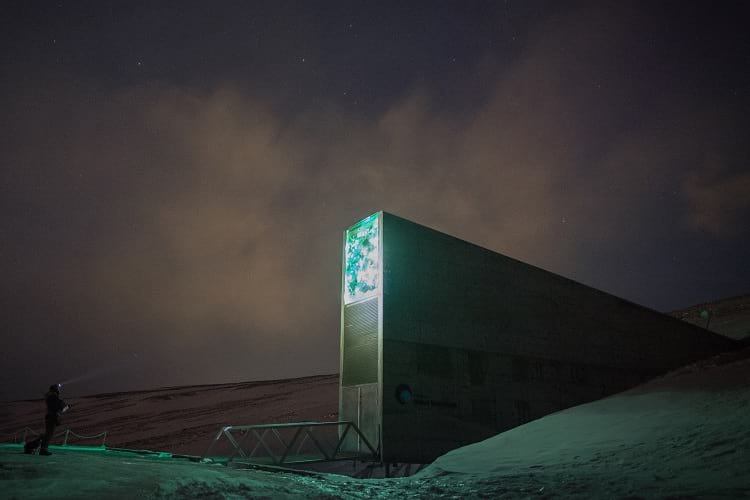 The Svalbard Global Seed Vault, which is familiar by the name ‘Doomsday’ Vault, is situated on Spitsbergen, part of Svalbard archipelago of Norway. It is essentially the most secure gene bank with several varieties of agricultural and wild seeds which are stored at low temperatures. Not only does the vault serve its purpose, that is to offer protection to the seeds against the local threats the gene banks face around the world, but it also doubles up as a stock or a backup of seeds ready for use in the aftermath of a global catastrophe.

It houses millions of seeds belonging to more than 930,000 varieties of food crops. It began operating in February 2008 and is led by the Norwegian Government. Bente Naeverdal, the vault’s property manager and the supervisor of operations of the vault, says about the vault’s location that, “It is away from the places on earth where you have war and terror”. By being 130 meters deep into the ground and 130 meters above the sea level, the facility is immune to extreme conditions.

Structure and inside the Doomsday Vault

A structure protrudes out of the mountain which opens into an access tunnel. An artwork, “Perpetual Repercussion” by Dyveke Sanne enhances the aesthetic of the roof of the building and upper half of the façade at the entrance. At the end of the access tunnel that opens up from the entrance, there exist three vaults. 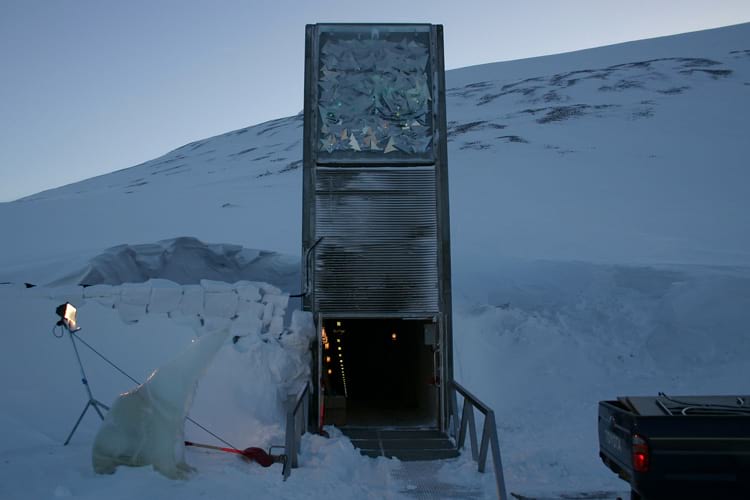 The door of the vault in use is covered in ice, suggesting the sub-zero temperatures inside the facility. The seeds are amassed at about 18 degrees below zero, in vacuum sealed packets and are tidily placed on floor-to-ceiling shelve racks. The vault is operated jointly by The Crop Trust, an international organization working to safeguard crop diversity, and the Norwegian Government, who had provided the funds for the construction of the vault, stood a reality following the United Nations negotiations to form an International Seed Treaty in 2001.

It is estimated that approximately 1700 gene banks exist across the world, and the main goal of the Svalbard Vault is to act as a backup storage division of all the varieties housed by this network of gene banks.

The damage done to the biodiversity resulting in its loss is a growing menace in the modern world and it sped up after the turn of 20th century. The Crop Trust hopes to maintain a record of the endangered assortments in order to deal with any complications that may arise in the future. The crop varieties stored in the vault may have genetical answers to a production shortage, or a deadly pest or disease, something that is required in a world dealing with climate change. The first deposit withdrawal for restoration

The best example of this vault’s utility is the journey of the International Center for Agricultural Research in Dry Areas, ICARDA. Based in Syria, with headquarters in Aleppo, they were forced to abandon the research center when the civil war broke out, leaving behind their precious collection. They became the first party to withdraw their ‘deposit’ and managed to restore their entire collection. However, these gene banks, performing such important activities necessary for mankind’s survival, are underfunded. The Crop Trust also strives to raise funds for these gene banks around the world.

This hopeful exercise in international cooperation to uphold the food security is a much-needed move in a world torn by conflicts. Any organization belonging to any country can back up their collection in the vault, ensuring their safety. Hopefully, this repository may never be called into action. But, the vault will be equipped for such a calamity.

Enjoyed this article? Also, check out “Padmanabhaswamy Temple: The Richest Temple in the World with Gold Worth $22 Billion in Six Vaults“.

Previous Article
Seawise Giant: The Enormous Vessel That Remains the Biggest Man-Made Ship Ever Built
Next Article
Ever Heard About the Darvaza Gas Crater That has Been Burning in Flames for the Last 50 years?