Dole Air Race: The Daring and Pioneering Conquest Across the Pacific Ending in a Tragedy

1927: In their quest for US$35,000 prize money and some chunk of popularity, fifteen single-engine aeroplanes registered for a chance to be the champion of flying from Oakland to Hawaii. That too, only a couple of months after Charles Lindbergh’s successful flight from New York to Paris. Eleven contenders qualified for the final race. And then the spate of direful mishaps broke loose as planes started crashing in rapid succession.

Eventually, eight out of the eleven qualified aeroplanes participated in the race. Two crashed during take-off and two went missing. Another developed snags and returned for a repair. It later again took off to search for the untraceable flights only to never come back again. Only two could ultimately touch the finishing point.

Line-up of aircraft before the race. (SDASM Archives / Flickr)

The Dole Air Race or the Dole Derby, a flight competition across the Pacific Ocean was mired in unfathomable tragedy and misfortune. The inspiring feat of a successful trans-Atlantic flight by Charles Lindbergh motivated pineapple business tycoon James D. Dole to announce the race to fly 3,870 kilometres from Oakland to Hawaii.

Obviously, flying a plane in 1927 called for a certain flavour of insanity. The sundry planes that assembled to participate in the race were progressively a testament of the grit and mettle of the flight crews than the front line innovation. Shocking as it may sound, the planes, in those days were bereft of any real safety gear and lacked efficient navigational equipment.

The race was tangled up in mishaps even before it started. Firstly, it was Lieutenants Covell and Waggener, who in their pursuit to win money, fame and reshape history embarked on the journey from San Diego to Oakland for participating in the race. Fifteen minutes after they took off, their plane veered into dense fog and slammed over a cliff by the ocean. 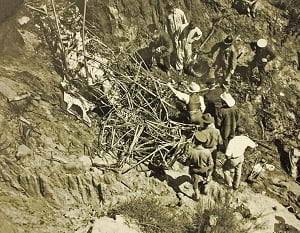 The second tragedy struck when pilot Captain Arthur Rogers undertook a test endeavour. While landing, the aircraft plunged from a height of 125 feet and crashed resulting in his death. The reason for the crash is still unknown.

In a third disaster, another Dole participant crashed en route to the racing point and tumbled 100 feet into the water. Surprisingly both the pilot and the navigator survived.

Thus, by the time the Dole Race did not even commence, three lives were already claimed.

The motley assemblage of the final eight participating planes

• Pabco Flyer – a monoplane flown by Livingston Gilson Irving
• Woolaroc – a customized Travel Air 5000 led by Arthur Goebel and navigated by William Davis
• Oklahoma – a modified Travel Air 5000 with Bennett Griffin and Al Henley as the crew
• Aloha – a monoplane piloted by Martin Jensen and manoeuvred by Paul Schluter
• El Encanto – a monoplane with Norman Goddard and Kenneth Hawkins as the crew
• Golden Eagle – a prototype monoplane with Jack Frost as the pilot and Gordon Scott as the navigator
• Miss Doran – a civil utility aircraft that had Auggy Pedlar as the pilot, Vilas Knope as the navigator and Mildred Doran as a passenger.
• Dallas Spirit – a monoplane that was flown by William Erwin and steered by Alvin Eichwaldt

The epoch-making day of 16th August 1927 sprang up with a foggy morning. An estimated 100,000 onlookers had gathered at the Oakland Airport to watch the much-plugged race.

The initial departures were nothing but highly disruptive and troublesome. First, it was Oklahoma that took off around 11 AM. The crew, however, aborted the flight 45 minutes following the take-off. They suspected an overheated engine problem and returned empty handed.

Then it was El Encanto’s turn. The aircraft could not clear the runway. Because of fuel overloading, it swerved, crashed and had to abandon the race.

Pabco Flyer flew only for a few moments and then crashed around 7000 feet away from the airport runway. It had no other option but to withdraw from the field. Fortunately, the crew came out unhurt.

Golden Eagle had a smooth take-off and disappeared into the air. The aircraft along with the crew were misplaced amid the sea and could never be found.

Miss Doran had a successful take-off only to come back after ten minutes with its engine emitting splitting sounds. On its second attempt, it flew out of sight, went lost in the sea, and sank without a trace. 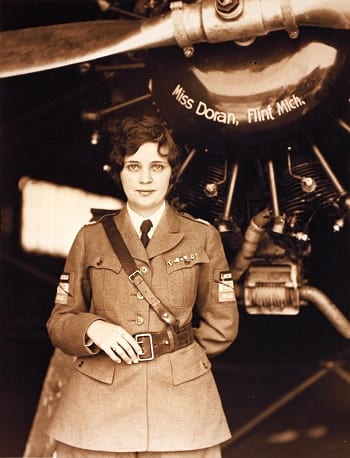 Mildred Doran posing with her aircraft before the race. (SDASM Archives / Flickr)

Dallas Spirit had a failed trip and flew back to Oakland with a damaged fuselage. It was only Aloha and Woolaroc, which took off without any glitch and finally could realize the impossible mission.

In retrospect, it proves beyond doubt that all the aircraft were badly prepared for the dangerous intersection. The crew had minimal knowledge of the flying route and the climate at higher altitudes.

With only four aircraft having a radio transmission equipment and the crew with no survival gear, it was a tribute to all those who attempted this unthinkable and perilous feat, their fearlessness and a lot of good luck.

The finale and winners

Aloha and the Woolaroc were the only two planes that could reach their final destination. Woolaroc flew at an altitude of more than 4000 feet and traversed a great-circle flight path. Davis, who was the navigator, leveraged with smoke bombs and sextants for calculating the course and the wind drift.

When the plane reached Hawaii, the team was warmly greeted and escorted out of Wheeler Field by a Boeing PW-9. Goebel and Davis arrived in a period of in 26 hours and 17 minutes and won the race and the cash prize of US$25,000. The aircraft is currently on display at the Woolaroc Museum located in Oklahoma.

Aloha, which took 28 hours to clock, came in second and earned Jensen and Schluter, the prize money of US$10,000. Martin Jensen, who was the pilot kept all the money with him. He gave Paul Schluter, his navigator, a paltry amount of $25 much to the latter’s shock and anger.

At long last, only two planes, of the total 15 that registered in the first instance, could make it to Hawaii. By that time, already six planes were totally decimated and the casualty figure rose to 10. Going by these circumstances, the Dole Air Race was found to be less of a competition and more of a horrific event in Chicago.

Nothing was ever heard about Golden Eagle and Miss Doran. An extensive search supported by three submarines USS S-46, USS S-42 and USS R-8 was soon arranged by the US Army and US Navy.

Martin Jensen flew around Hawaii in Aloha to look for the two missing planes. Simultaneously an Army plane crashed resulting in the casualty of two crew members.

Once the repair work of the faulty tail assembly of Dallas Spirit was finished, Alvin Eichwaldt and Bill Erwin also took off in their plane from Oakland for Honolulu in the dig endeavour. Both of them never returned. The last radio message from Dallas Spirit indicated that the flight was under the spell of a vigorous gyration.

The ill-fated Dole Derby ended up taking 12 lives. A sensible introspection of this hefty cost the encounter paid for, triggered widespread reservations on the idiosyncrasy of the wisdom that tried to achieve this gargantuan feat of bridging the oceans by air. In an embittered state of affairs, Charles Dole, the race’s chief sponsor, died on November 27, 1927. 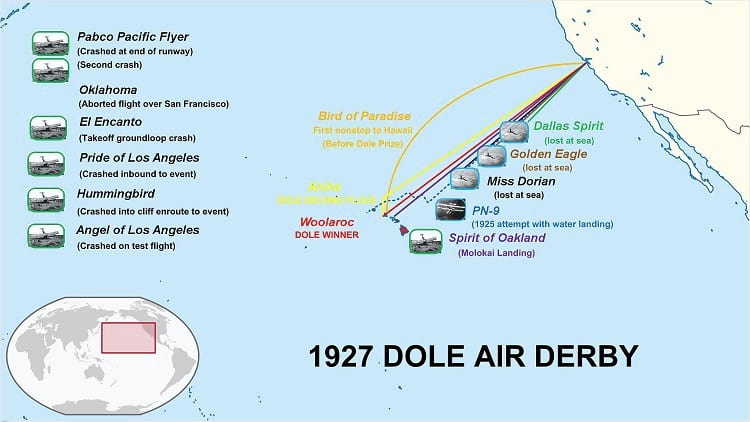 The fate of all participants of 1927 Dole Air Race. (FlugKerl2 / Wikimedia Commons)

The turning point in November 1935

The concluding analysis of the Dole Race demonstrated the very fact that operating transoceanic flights was a critical activity. It needed well-ordered functional arrangements, genuine expertise, sufficient and comprehensive training, robust equipment in equivalence to the magnitude of the undertaking and last but not the least, with the reverence towards the boundless expanse of the ocean, it must be absolutely equipped with the ability to conquer the challenges.

Furthermore, it was not very long before others responded to the transoceanic dare. In the following year, Charles Kingsford-Smith from Australia flew from the same Oakland air terminal and jetted the distance back with stopovers at Hawaii and Fiji. After seven years a massive flight of the U.S. Navy patrol aircraft accomplished the trip.

Be that as it may, the real defining moment finally arrived in November 1935. Equipped with the aggregate involvement and experience of the individuals who had set the scene before, coupled with their expertise in acing the operations of transoceanic journeys, Pan American Airways, at last, addressed the concern revolving around flying over the Pacific Ocean as a feasible and consistent proposition. This year will mark their eighty-third anniversary and since then, they have never looked back.

Recommended Read:
Race to Hawaii: The 1927 Dole Air Derby and the Thrilling First Flights That Opened the Pacific | by Jason Ryan