Diving Horse: Act of the Twentieth Century that Baffled the Audience 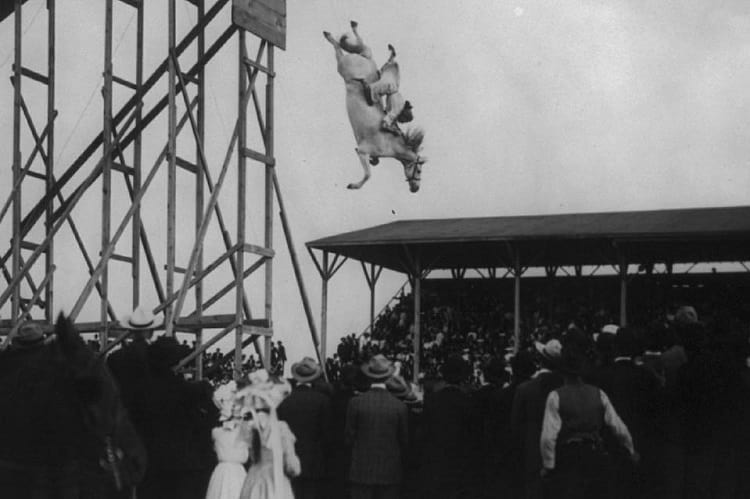 During the early twentieth century, a show called “The Great Carver Show” became center of attraction at the Atlantic City’s Steel Pier. This queer and bizarre show involved a horse with a young lady in a swimsuit on its back, jumping from a high platform into a pool of water below. The platforms were set as high as 60 ft and the horse had to jump into a tank just 12 ft deep. Just for comparison, professional divers competing in Olympics and other World Championships, dive from a height of 32.8 ft into a 16 feet deep pool.

The show was dangerous yet extremely popular, attracting a multitude of crowd. Perhaps this is ‘what’ was considered entertainment in those days. The act of the show was simple, the horse would walk up a platform raising to a height varying from 30-60 feet. The rider would mount the horse and then the duo will take the leap of faith and dive into a pool of water below.

The inception of the diving horse

The idea of the show was developed by William Doc Carver. He claims that this idea came into being due to a mishap. Carver was once crossing a bridge over Plate River in Nebraska and suddenly, the bridge collapsed. His horse jumped into the water instantaneously. By the time, the horse was paddling towards the shore, Carver used his experience to develop the idea of the act of “Diving Horse” as a means of entertainment.

While Carver had a detailed blueprint of the “Diving Horse” as a commercial show in his mind, he knew that he had no future as a performer. As a result, he convinced his daughter, Lorena, to take up the practice with the horses.

The horses were trained to dive three to four times on performance days. Each horse was unique and had its own style of diving. One of the horse, would stand and watch seagulls pass by and then dive. While there was another horse who would simply rush up to the platform and jump without stopping or waiting for the diver. Once he went too fast and out-jumped the pool, he was retired thereafter.

Carver took the show to several tourist cities, where people longed for entertainment.“The Great Carver Show” frequently visited big cities like San Antonio, where people were willing to pay more than 50 cents to watch horse taking a leap from a height of 3 story building. Soon, the show became a sensation. In 1927, when William Carver died and his son Albert promptly took over the administration of the show. The next year, the show took up a permanent spot at Atlantic City’s Steel Pier. While the sport was really dangerous for the duo, surprisingly, no casualty was ever reported on the account of the horse. But the riders occasionally suffered from impact and other types of injuries. There were several broken bones and bruises around the year. In fact, on 17th February 1907, a young rider, Oscar Smith lost his life in a dive in San Antonio. Despite the several risks and fatalities involved in the sport, the divers were exceptionally passionate about it.

One such example is Sonora Webster who joined Carver’s show in 1924. At the time of joining, Sonora was 20 years old. She was fascinated by an advertisement in the newspaper for “a girl who could swim, dive and was willing to travel.” She dived for 18 years, 11 of them sightless.

“In 1931, Sonora Carver went blind from detached retinas suffered after one of the horses, Red Lips, went into a steep nosedive during her performance, sending Carver face-first into the water” reports the Los Angeles Times. But, her sightlessness didn’t seem to lower her morale and she went on to set an example by performing with her horse ‘Red Lips’ for 11 more years till 1942. Her inspirational story has been featured in Disney movie “Wild Hearts Can’t Be Broken” which is based on her autobiography “A Girl and Five Brave Horses.”

The show came to an end in 1978. It had been a very controversial act and had invited severe criticism and protests from the public and the animal rights and welfare groups since the 1970s. The people claimed that the horses were forced to jump using electrical jolts and were ill-treated. 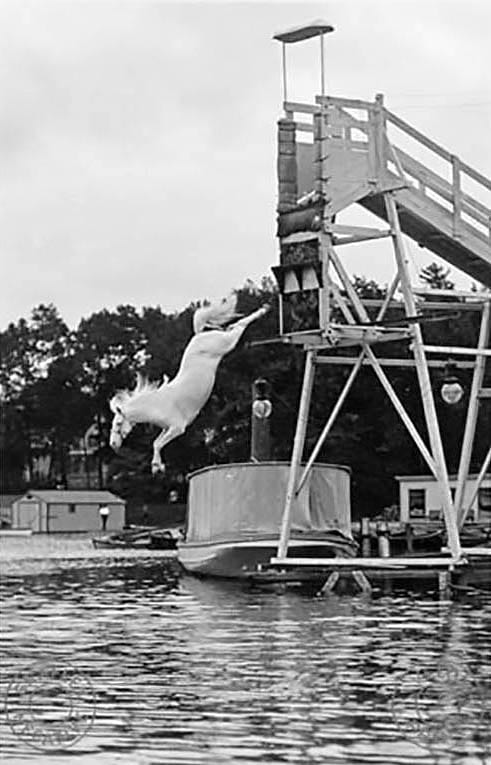 The horses were trained to dive three to four times on performance days. (John Boyd / Archives Of Ontario)

Arnette, sister of Sonora Webster, claimed during an interview that “Wherever we went, the S.P.C.A. (Society for the Prevention of Cruelty to Animals) was always snooping around, trying to find if we were doing anything that was cruel to animals. They never found anything because those horses lived the life of Riley”. When the show was closed, the last two diving horses were acquired by ‘The Funds For Animal. In 2012 an attempt was made to revive the nostalgic times, but it was soon halted after 55,000 people signed an online petition opposing the idea.

A horse named Lightning still dives in Magic Forest, New York. However, he dives into a 14 feet deep and 30 feet wide pool from a height of safe 9 feet. He dives twice a day during his two-month long season to entertain his audience. He is the world’s only diving horse. The last diving horse ‘Lightning’ about take a plunge in the pool at Magic Forest amusement park. (Source: thedivinghorse.com)

Enjoyed this article? Also, check out “Clever Hans: The Einstein Horse That Could do Math“.

Previous Article
Hanns Scharff: The Extraordinary Interrogation Technique of a Nazi Interrogator
Next Article
Hughes H-4 Hercules | The Largest Flying Boat That Flew for Only 26 Seconds