Ever Heard About the Darvaza Gas Crater That has Been Burning in Flames for the Last 50 years? 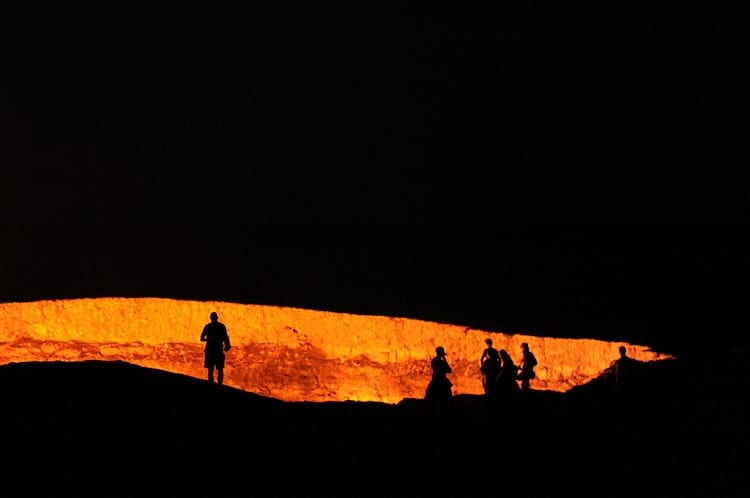 There are only a few sites in the world, which make you stop and wonder. ‘Door to Hell’ or ‘Gate to Hell’, the Crater of Fire, the Darvaza Gas Crater is one site in the world where one can watch fire flames erupting in the center of a desert. The ‘Door to Hell’ is located almost 266km away from Ashgabat city (capital of Turkmenistan). The Karakum Desert is known to be the 13th largest desert on the planet. It spans an area of approximately 15,440 square miles. Throughout the year, the 69 meters broad and 30 meters deep sinkhole remains in flames 12 months a year.

Origin of the fire in Darvaza Gas Crater

Records about its inception are imprecise. There are two prominent but different versions of the story behind its burning. Turkmenistan is known for its abundance in natural gas. The site was initially discovered in 1971 by Soviet geologists and determined that it was suitable for further exploration. But shortly after they established their base and began drilling, the site collapsed into itself forming this crater which began spewing noxious gases.

The scientists deemed these gases harmful to the community around it. They set the crater alight thinking that it would burn itself out within a few days, in an attempt to minimize the damage. But, the crater has been burning for more than four decades now. In an alternate version of the story, it is believed that the site was discovered during the 1960s and that it was set alight two decades afterwards, deeming it extremely difficult to establish a credible timeline of the events.

In 2013, a Canadian adventurer named George Kourounis became the first man to have made his way into the crater. He later described his expedition to the National Geographic as ‘a coliseum of fire’.

In a statement given to the National Geographic, he mentioned that one could clearly watch ‘fires burning in smaller portions’. The sound coming from the crater was similar to that of the jet engine. According to George, in particular, the sound was more like that of burning gas.

He further stated that the inside of the crater had no smoke. In fact, nothing blocked his view and he noticed everything with much clarity. His adventure didn’t go in vain, as he managed to discover bacteria living at the bottom, comfortable with the harsh conditions that existed there. These bacteria weren’t found in the surrounding soil of the crater, making them a part of a little micro-ecosystem at the bottom of the pit. People come from various parts of the world to see the burning crater. However, the site only amazes those who are in search of something never seen before. Despite the danger that the crater poses, the area is not bound by any kind of fencing or barricading. People are allowed to stand right at the very edge of the crater and take a good view of the burning flames. The site has attracted more than 50,000 people over the past 10 years. A couple enjoying the view of the crater. (Sunriseodyssey / Flickr)

Visitors camp for a few days near the site at the Karakum Desert. One can see the radiance of the burning crater from a quite a distant. Also, the smell of burnt sulphur can be identified while approaching the crater. In the year 2010, Gurbanguly Berdimuhamedow, the president of the country gave orders for closure of the hole, (citing fears that it would threaten the country’s natural gas fields). However, the hole has not been closed to date.

Previous Article
Doomsday Vault: A Colossal Gene Bank with Over 1 Million Seed Varieties
Next Article
Solving the Mystery Behind the ‘Sailing Stones’ of Racetrack Playa