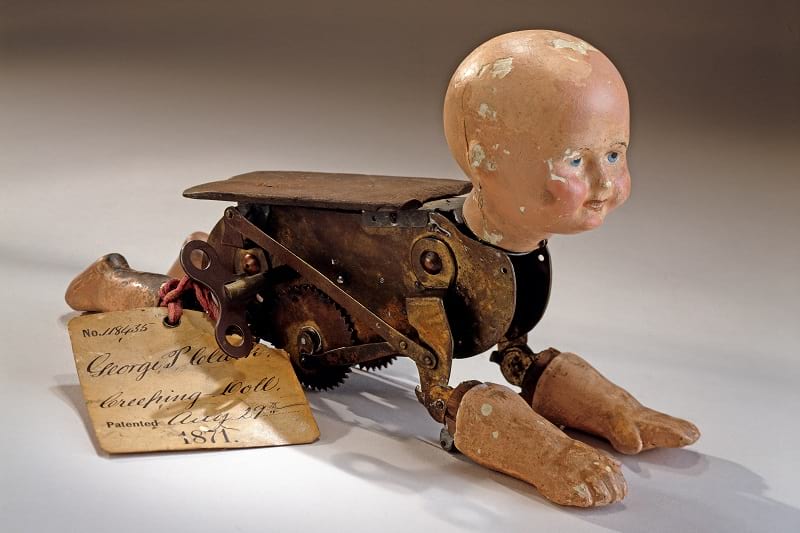 Toys have a great impact on babies and toddlers and their cognitive development. With amusement and play, toys help them recognize and identify texture, colours, shapes and numbers—one of the many positive effects of getting the right toys. But not all toys are amusing, one such toy is the Creeping Baby Doll by Robert J. Clay. The name is a misnomer; the toymaker didn’t mean to fright babies with the doll, but creeping in earlier days meant crawling. This Creeping (crawling) Baby Doll, Clay said, was “a very amusing toy and produced at a small cost”.

Built in the 19th Century, the objective of this toy was to imitate human life and stimulate childhood development. In the 19th Century, crawling was considered unnatural and unfit for a sane human being and was thought to be a morally suspicious act, attributed to insanity and animal life. It was later in the mid-19th Century that crawling was accepted and normalized as a natural stage of development. This toy was built in 1871 to familiarize babies and kids with the concept and to amuse them. But rarely were they amused, the targeted audience—baby girls found them unattractive and scurried far from these mechanical toys. 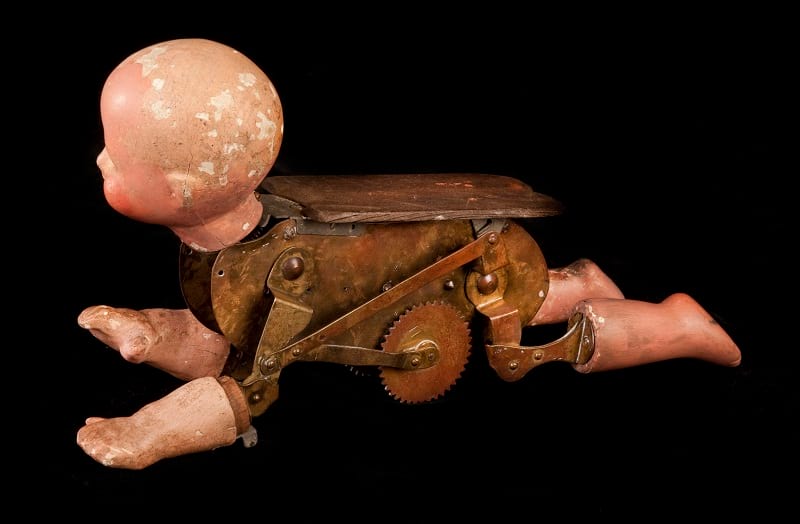 Read more: The Man Who Could Turn His Head Around By 180 Degrees

The patent model of the toy built by Robert J. Clay in 1871 looked forbidding and weighed more than what babies could hold and little girls could carry. This unusual, non-cuddly and non-interactive toy didn’t appeal to the audience but found its market as a novelty. The head, arms and legs of the toy were made with painted plaster; legs and arms were attached to a brass clockwork that would activate the arms and legs to imitate movements of crawling. The doll body had two hidden wheels underneath that would help in moving forward by rolling. Robert J. Clay was granted the patent for the toy on 14th March 1871. Following this, a better and improved version of the Creeping Baby Doll was made by Clay’s employee, George P. Clarke, who received a patent for his model on 29th August 1871. In 1872, Robert J. Clay further improvised the original model and invented the Crying Creeping Baby Doll, that not only crawled but also produced sounds emulating human baby cries.

This mechanical toy, patented by George P. Clarke, is now exhibited in the Smithsonian National Museum of American History.

Previous Article
A Ballad Of Remittent Fever: Story of early 20th Century Calcutta Tackling a Pandemic
Next Article
How Trump’s Phony War with Twitter is Going to Affect the Internet