With the advent of e-readers, many in our generation are unaware of libraries. The concept of libraries was uncommon during the Middle Ages, circa 5th to 15th century. Back then books were chained to shelves in European libraries; to them, the concept of freely accessing books was just unusual. During that period, books were kept in book chests called almeries. These chests were kept in rooms that included valuables and hence, the rooms were always locked. The room wasn’t actually considered a library as we know it today, and visitors were not allowed to freely walk in and read the books.

As the demand for books increased during the beginning of the Renaissance period, institutions started using separate rooms to store books. One room would be used for books in common use, similar to a reference section in modern times, and another room for books in daily use. Institutions in that period had a loan system that allowed scholars to borrow books from them for a year at a time. This proved to be ineffective because other interested scholars would have to wait a whole year before they could read the book. In order to make books easily accessible to students, scholars, and commoners without any waiting period, institutions started chaining some valuable books and placing them in community libraries.

Sorbonne Library in France seems to be one of the first libraries in the late 13th century to have started the process of chaining books. Libraries determined the value of books on the basis of educational worth and not financial worth. It would have been ironic to chain financially valuable books because the process of chaining them was quite expensive. There were even some educationally valuable books that were kept under a triple key system so that readers would have to get permission from three separate officials.

Eventually, books were also chained to avoid books being stolen since books were very expensive to print back then. Once the printing press was introduced in 1450, the number of prints available of the same book increased significantly. This meant the value of books dropped drastically and made them less special, this eradicated the need for chaining books to the shelves. 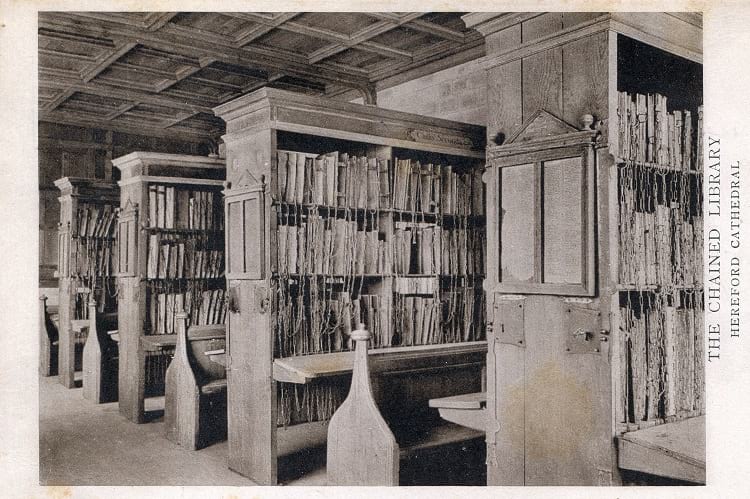 The process of chaining books

As for the process of chaining itself, the chains were not attached to the spine of the book but instead were attached either to the corner or the cover of the book. Attaching to the spine would cause unnecessary wear and tear while removing the book from the shelf. 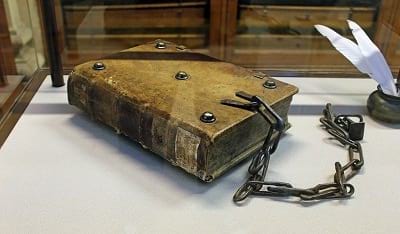 Due to this way of chaining, books were generally displayed the ‘wrong way’ with their spines not visible to the reader which would otherwise cause tangling of the chain. These chains would be long enough so that the readers could take the books to a table, but they were short enough so that the books would stay within the library itself.

In some libraries, there were benches available just below the shelves for readers to sit and read. In others, there were rows of seated lecterns. If a book ever needs to be removed from the chain, the librarian would use a key to remove the chain.

These days many libraries have given up chaining books, the few books that remain chained are done so for more of a vintage value than functional. However, off late, there seems to be a growing interest in restructuring chained libraries. There are a few chained libraries that are known to have survived with their original security systems still in place.

Hereford Cathedral Library is the largest chained library that is still in existence from the 17th century with its chains, rods, and locks still intact. Some old books are kept as manuscripts, and some of them contain ancient handwriting and illustrations in gold and colour. Some notable books here are the Hereford Gospels that were written in the 8th century and the Hereford Antiphonary written in the 13th century. The chained library in Wimborne Minster built in 1686 is the 2nd largest chained library in the UK that is still in existence. Another library is in the Church of Saint Walburga built in the 15th century. This library is now home to a museum that lets visitors look at the library’s original books and chains. Malatestiana Library in existence since the Italian Renaissance has undergone a significant amount of work to rebuild and preserve itself.

Contrary to what it might seem, libraries were trying to make books widely available to students and commoners by chaining them and not trying to restrict access. Chained libraries might have been in reducing printing cost and making sure books were available to more people at a time, but they were not very enjoyable. These libraries were often overcrowded and readers would be forced to sit very close to each other causing awkwardness. Many time readers would clump together to share one book. In these situations, it seemed like the readers were confined in one place and not the books.