The Cano Cristales river is one of Colombia’s most spectacular natural wonders. Running for 100 kms through the Serranía de la Macarena National Park in Colombia, this incredible five-coloured river has its source to the south of the park and flows eastward to become a tributary of the Guayabero river. The colours of the rivers come from the Macarenia clavigera river weed that grows underneath the fast-flowing river water.

In Colombia, the local populace refers to small rivers as pipes. With a width of 65 feet, the Cano Cristales river is a pipe. The water in the river is so pure and transparent that you can clearly see right down to the rocky riverbed. Along its length, you will encounter several waterfalls, deep pools, and caverns. The caverns are a result of centuries worth of steady erosion as the fast-flowing river water sped past the rocky faces.

The pools formed as a result of the enlargement of small pits in the rock bed. This enlargement came about from rock pieces grinding against the pit’s wall as the water current swirled the rocks around. The river water lacks the nutrients necessary to sustain aquatic wildlife, so there are no fish in the Cano Cristales. The colourful Macarenia clavigera is the only plant life in the river.

Macarenia clavigera is a river weed from the botanical plant family Podostemaceae. Native to subtropical and tropical climates, these river weeds grow underwater, clinging tightly to hard rock and stone beds in fast flowing rivers. Macarenia clavigera is known to exist only in Colombian rivers such as Cano Cristales and Cano Siete Machos in Meta department, and Cano Tranquilandia in Guaviare department.

The plant is rather fragile, with a thick, flexible stem that has thin, delicate, and cotton-thread-like leaves. It comes in various colours, the colour depends upon the amount of sunlight the plant is exposed to and the depth of water in which it is growing. In areas where there is a lot of sunlight, the plant can be seen in colours like pale pink, magenta, various shades of red, and deep purple. In shaded areas, the plant usually looks bright green and can appear to be blue, yellow, or orange coloured as well. 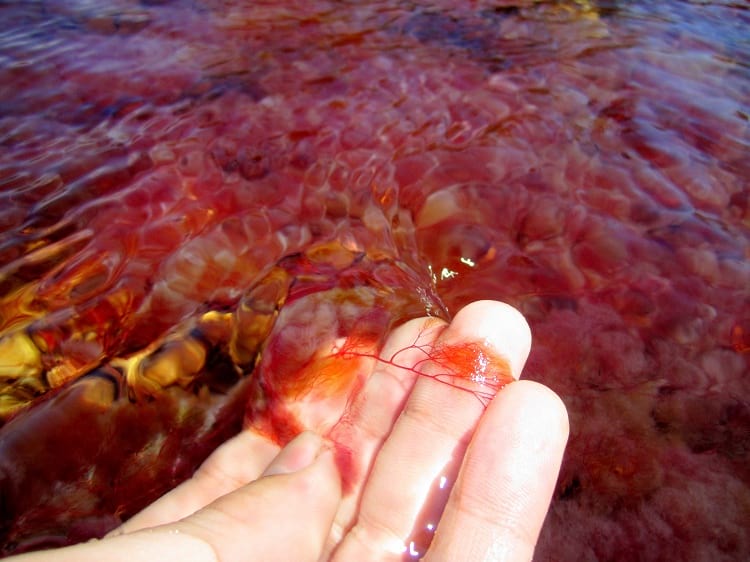 The geographic characteristics of Colombia such as its closeness to the equator and its wide range of altitudes ensure variable weather experience at different locations of the country throughout the year.

The rainy or wet season occurs in the months of April, May, October, and November. During this season, when water levels are high and hardly any sunlight reaches the depths of the river bed, the Macarenia clavigera is olive-coloured and is difficult to see in the water. In the dry and hot summer months of December, January, July, and August, the plant lacks the water it needs to colourfully thrive. It sheds its seeds in this season. New plants start to sprout in the following wet season, with the growing roots deriving nutrients from the minerals in the rocks in the riverbed.

From the beginning of August to the end of October, Macarenia clavigera finds the ideal amount of sunlight and water it needs to bloom in abundance, and it then colours the Cano Cristales with its vibrant hues. This picture changes practically every year, as the swift water current moves and alters the positions of river rocks to some extent and the river carves new paths through the rocks. Old trees fall in some areas and new trees proliferate thickly in other areas, creating new sunny and shady areas along the river. These changes affect the growth of the Macarenia clavigera and that, of course, affects the colours of the river.

Discovery of the Cano Cristales river

The indigenous people living in the area have known the Cano Cristales for centuries. The rest of world got to know of its existence only in 1969 when some Colombian cattle farmers went to explore the area and came across the river when Macarenia clavigera was in bloom. The discovery, however, did not lead to an influx of tourists trekking through the wilderness.

For many years, from 1964 to 2002, the war between the Colombian government and the FARC guerrilla armies made the area inaccessible to the general public. In the mid-2000s, the government was able to regain control of La Macarena and around 30 km of its surrounding area. While the government could not guarantee the safety of visitors beyond this area, the strong Colombian military presence in La Macarena made it relatively safe for adventurous tourists to visit the Cano Cristales river. The area became a popular tourist destination after air travel became possible in 2009. In 2017, the FARC disarmed themselves and the area has been at peace since then. There are now many hotels and restaurants in the area.

A regional government agency called Cormacarena manages sustainable development in the area. Various communities residing in the area also take an active part in ensuring that the environment is not harmed. To protect the Macarenia clavigera plants and the river from pollution, the Columbian government has enacted and enforced several environmental laws.

They have made it mandatory for tourists to apply for a permit from the National Parks Office prior to visiting the Cano Cristales river, and they allow only 200 tourists to visit the area per day. Tourists must only visit in groups of up to seven people, and they have to be accompanied by an authorized guide. There is a ban on the use of sunscreen lotions and insect repellent sprays in the area. Swimming is limited to some designated areas of the river. From January to June, the authorities do not allow visits to the Cano Cristales river to ensure that the Macarenia clavigera plants can propagate undisturbed in these months.

As the photogenic Macarenia clavigera attracts more tourists, the Cano Cristales river is becoming popular as an ecotourism destination.

If you would like to visit the Cano Cristales river, you should head for La Macarena, a small town on the banks of the Guayabero River, right next to the National Park. There are direct flights from Bogotá, Villavicencio, and Medellín to La Macarena. From La Macarena, there are jeeps and boats to take tourists to the start of the hiking trails in the national park which lead to Cano Cristales. Tourists have to travel back to La Macarena in the evening; it is not possible to stay overnight as there are no campsites.

Previous Article
Thilafushi: The Good, Bad and Ugly of the Garbage Island of Maldives
Next Article
Atlantropa: The Ambitious Idea of Uniting Europe and Africa by Draining the Mediterranean