Body Worlds Exhibits by Gunther von Hagens: An Exhibition for the Better Understanding of the Human Anatomy 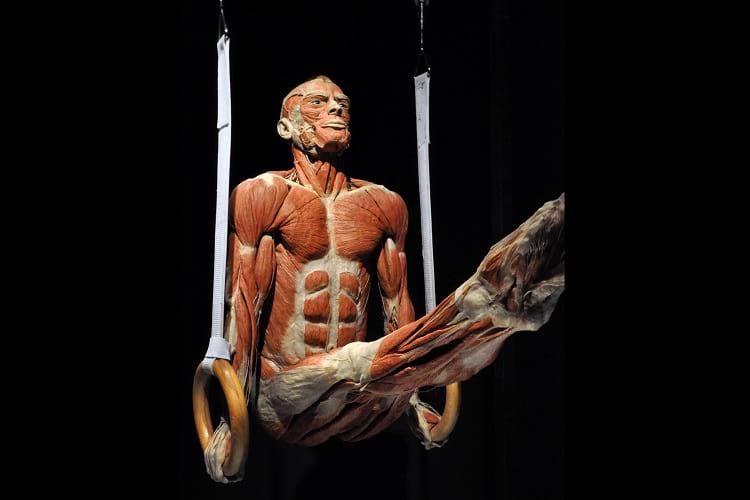 The Body Worlds exhibits by Dr. Gunther von Hagens is a famously controversial exhibition that straddles art and anatomy. If you have ever wondered what the human body looks like from the inside and how the different bones, muscles, arteries, and inner organs look in different positions, this is the exhibition that will enlighten you. The exhibition features over 200 real bodies that include human babies, young people, middle-aged people, elderly people, and also animals.

These bodies have been stripped of their skin to reveal the interior parts in stark detail and the bodies have been preserved in a lifelike state by a complicated, lengthy, and expensive procedure called plastination. Most of us are not accustomed to seeing dead human bodies and so this exhibition can come as a shock to many visitors. People have reportedly fainted while visiting. People holding certain moral, religious, and political views have criticized the exhibition as being disrespectful and demeaning to human life.

Dr. von Hagens doesn’t appear to be fazed too much by these controversies; he has successfully defended his stance and his exhibits in court on several occasions. He shrugs off the controversies and states that the purpose of the Body Worlds exhibits is to display for visitors the entire spectrum of the cycle of life. He also hopes that by seeing the exhibition people will become better informed about the workings of their bodies and that they will then take better care of themselves and live in a healthier way.

Formerly a Professor of Anatomy at Heidelberg University, Dr. Gunther von Hagens has a doctorate in Anesthetics and Emergency Medicine. He teaches at Dalian’s School of Medicine in China and also holds the Directorial position at the Bishkek State Medical Academy’s Plastination Center in Kyrgyzstan.

In 2002, Dr. von Hagens performed an autopsy on the corpse of a 72 years old man and the autopsy was telecast live on Channel 4. An estimated 1.4 million people watched the live broadcast. This was the first publicly performed autopsy in the UK in 170 years. 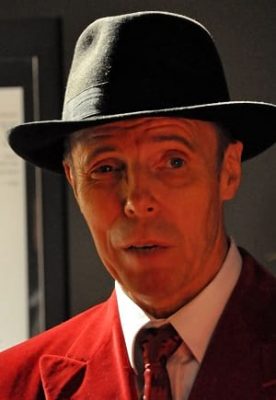 Dr. von Hagens thinks there should be more of these in the line of the public body dissections that were once performed in Padua and Leiden in the 16th century and which inspired the dissection artworks of Leonardo da Vinci, Albrecht Dürer, and Rembrandt. He calls it the democratization of the human body. People should know more about their own bodies, rather than this knowledge being kept the strict preserve of the medical fraternity.

The first Body Worlds exhibition took place in 1995 in Tokyo, Japan. Ever since then, Dr. Gunther von Hagens has taken the show to 47 cities in various countries in North America, Europe, and Asia, and over 37 million visitors have seen the exhibition.

All the bodies in the exhibits have been donated by people before their death and Dr. von Hagens maintains strict records and documentation regarding this. That said, the exhibition does not inform visitors about who exactly these people were and what motivated them to donate their bodies for the purpose of the exhibition.

The exhibition is arranged in an order from comparatively fewer shocking exhibits to more shocking exhibits to acclimatize visitors to what some people have described as the overall ‘gory spectacle’. That said, nothing in the exhibition is presented simply for the shock value. The bodies are arranged in various poses, both for artistic effect as well to show how the bones, muscles, inner organs, and other interior parts operate.

Visitors can avail of written matter as well as audio guides as they walk around the exhibits. The detailed anatomical information provided in these include how muscles, tendons, and bones work to move fingers and other body parts, how the heart works, how the nerves, arteries, and veins work, and so on. 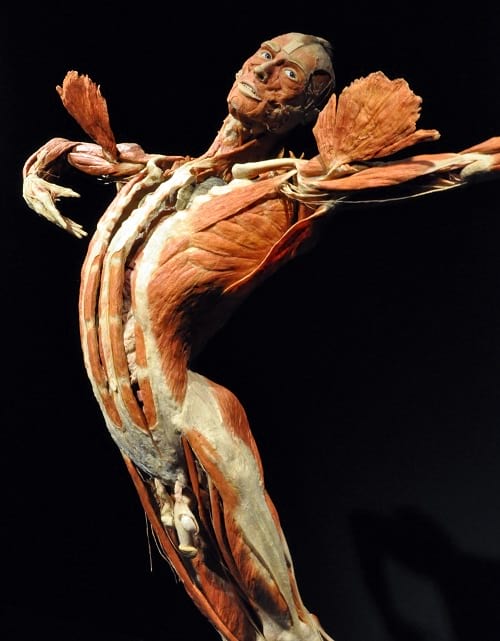 You can see how smoking and drinking affect your lungs and your liver, respectively. The exhibit has diseased or damaged lungs and livers placed next to healthy organs, so you can clearly see the difference. Many visitors find this more unsettling than any of the other exhibits.

Dr. Gunther von Hagens developed the plastination technique more than 25 years ago and patented it. The first body he plastinated took over 1500 hours to complete and cost around 25000 pounds. Human bodies have 30 percent solid matter and 70 percent liquid matter. In the plastination technique, the bodily liquids and fats are replaced by first acetone and then a combination of epoxy resins, polyester, and silicone rubber material. 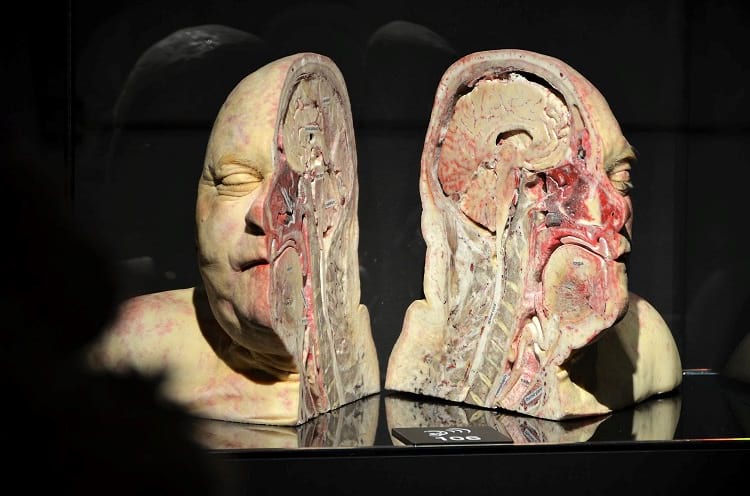 A man cut in half at the exhibit. (Pexels)

The result is a lifelike body with an intact-looking interior and no odour. Given the method of preservation and barring any destructive accidents, these bodies are likely to remain intact forever.

Quite a few people are attracted by the idea of preserving their bodies for eternity and Dr. von Hagens regularly receives donation offers and has over 3000 names on his roster. He has often spoken of his intention to have his own body plastinated after his death. While his reason to do so is to help advance the boundaries of human knowledge about anatomy and to foster better health care, the other folks have more prosaic reasons for wanting to join the exhibit. It is preferable to be exhibited, some of them feel, rather than to be buried or burnt.

Some of the famous displays of skinned human and animal bodies at the Body Worlds Exhibits include:
• A chess player pondering over a chessboard, with his brain visible in his cranium.
• A horse-rider, who holds his brain in one hand a whip in another, as he sits astride a leaping horse.
• An eight-month pregnant woman and the foetus in her womb.
• A cyclist hunched over his racing cycle.
• A pole vaulter with a pole in mid-jump.

The educational aspect of the exhibition

Many people have told Dr. von Hagens that visiting the exhibition gave them a better understanding of their body and heightened respect for it. According to Dr. von Hagen, a girl who had twice attempted suicide told him that she would never again do so. Knowing what is inside the body and what makes it work seems to fill people with the desire to treat their own bodies better.

The exhibition offers catalogues, posters, videos, and other teaching materials free of charge to schools for the edification of their students. An understanding of the human anatomy and the working of the human body is particularly important and essential for young and old people in the current world where certain parties with agendas have been busy encouraging the mutilation of healthy bodies as something socially acceptable for their own nefarious ends. A man holding his brain while riding a horse. (Immanuel Giel / Wikimedia Commons)

In 2004, according to a report by Der Spiegel, Dr. von Hagens obtained some bodies from Chinese and Kyrgyz authorities and these bodies were those of executed Chinese prisoners and dead patients from Kyrgyz hospitals. Dr. von Hagens returned some of these bodies, saying he did not know their origin and got an injunction against Der Spiegel for what according to him is a spurious claim.

Since Dr. von Hagens maintains strict control of the copyright of his exhibition and the plastination technique, he has taken legal action against competitors with similar exhibitions. According to the competitions, which include Bodies Revealed and Body Exploration, there are no grounds for a legal suit against them. They maintain that nobody has the right to copyright the poses of the human body.

In 2009, a French judge ordered the closure of a Chinese Body exhibition and the seizure and burial of all the bodies and body parts displayed in it. In the UK, the Parliament enacted the Human Tissue Act in 2004 by which all exhibits of bodies and body parts must first obtain a license from the Human Tissue Authority. In Scotland, such exhibits are required to obtain a license from the Scottish Ministry. The Bishop of Manchester opposed a Body Worlds Exhibition in 2007, claiming such exhibitions meant less available organs for making organ donations for medical purposes.

Many countries have enacted legislation either to make it difficult to obtain bodies and body parts for such exhibits or to ban such exhibits altogether as violating the sanctity of human life and showing disrespect to the dead. It is interesting to note that, for all their desire to respect human life, many of these countries are yet to enact any legislation to make war illegal.

Enjoyed this article? Also, check out “The Unknown Fate of Einstein’s Stolen Brain“.