Bingham Canyon Mine: The Largest Copper Producing Mine in the United States The Bingham Canyon Mine is an open-pit copper mine in the Oquirrh Mountains to the west of Salt Lake City in Utah in the United States. It is two and a half miles wide and a three-fourths mile deep. These dimensions make it the most extensive man-made excavation in the world. It is so large, in fact, that you can even see it from space. The Bingham Canyon mine

The mine gets its name from two Mormon brothers, Sanford and Thomas Bingham, who grazed their cattle there. Stumbling upon some copper ore in 1848, they were the first to realize the possibilities of mining in the area. However, the Mormon leader, Brigham Young, dissuaded them from carrying out the venture as it was more important for their people to establish a community right then. Bowing to that, they moved on to settle in Weber County. The canyon continued to be known as Bingham Canyon, though.

Mining in the Bingham Canyon mine

Mining operations began in 1863, and, since then, copper, gold, and silver have been the principal metals extracted from the mine. It also yields molybdenum and various other minerals. Around 25% of the total copper produced in the USA comes from the Bingham Canyon Mine. The mine has produced more than 19 million tonnes of copper over the years.

In the 19th century, a number of mining companies staked their claims in the mine. Their ore extractions, however, were mostly small-scale. It wasn’t until 1906 that open-pit mining for large-scale ore extraction commenced.

A township of miners and their families sprung up around the mine along the canyon walls in the 1920s, but it dwindled as the mining operations began using more sophisticated machinery and methods. Moreover, as the mine expanded, it began swallowing up more and more of the surrounding land, including sections of the township. The intensive mining operations resulted in a gigantic pit that is around 970 metres deep, 4 kilometres wide and extending across 7.7 square kilometres. 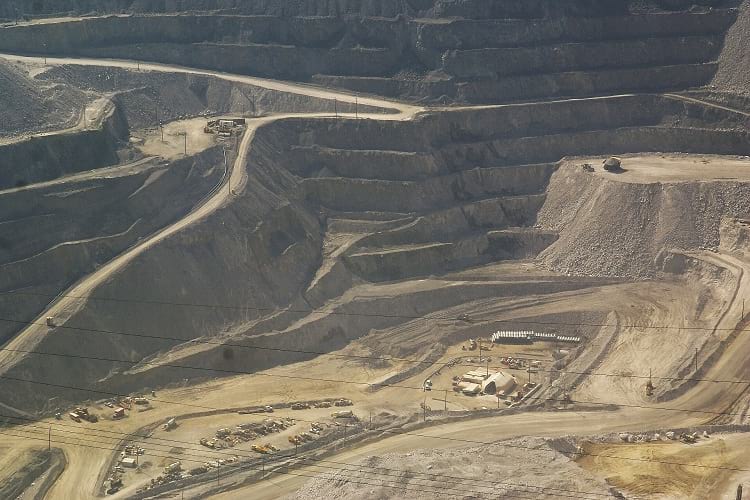 Inside the mine. (Hermann Luyken / Wikimedia Commons)

Mining Companies in the Bingham Canyon mine

Between 1906 to 1923, some of the mining companies merged and sold their shares to larger mining corporations. For instance, the Utah Copper Company sold 75% of its interest to the Kennecott Copper Corporation.

By the 1970s, the Kennecott Copper Corporation and the Anaconda Minerals Company had acquired all the other mining operations. Sohio took over the Kennecott Copper Corporation in 1981 and stopped open-pit mining operations in 1985. They began mining for gold in Barney’s Canyon the following year. BP Minerals bought the mine assets from Sohio in 1987 and mining operations resumed. The Rio Tinto Group has owned the mine since 1989 and has since spent billions of dollars in modernizing the mine and cleaning up the polluted groundwater.

The landslide at Bingham Canyon mine

After a massive and disastrous landslide on the mine’s northeast wall on 10 April 2013, the mine management closed it to visitors for several years. They worked on reducing the mine’s eastern slope in a bid to prevent any more landslides. The situation is now reasonably under control to allow visitors once again.

Visiting the Bingham Canyon mine

You can visit the mine from 1 April to 31 October—as long as the weather holds up—but it is necessary to make prior reservations and purchase tickets online. The mine donates all the income derived from visitors to various charities and non-profit organizations.

The mine is about an hour’s drive away from Salt Lake City, and you can only enter it via the company’s shuttle bus. The bus takes you on a 15-minute ride up to the top of the mine. As you go up and come back down on the bus, you can watch two videos about the mine and its operations. The videos detail the mine’s history and explain how the miners extract ore from the rock.

From the two observation decks at the top, you can get a fantastic view of the open pit mine and its many ridges. Moreover, you can listen to an audio presentation—available in multiple languages— detailing what is going on down below. There are winding roads looping up along the mine’s perimeter, and slow-moving trucks are the only visible traffic on them.

Situated at an elevation of 6700 feet, the most incredible thing about the mine is its sheer size.

You will probably come away more amazed at its immensity. From a height, the trucks that bear away the extracted ores look quite minuscule. From a close-up view, they are gigantic and capable of carrying 240 to 320 tons of ore. They deliver this to the crusher in the open pit. The machine then pounds it into small pieces. These crushed pieces are then loaded on a conveyor belt that extends for five miles towards the Copperton Concentrator.

Visitors can look at the displayed mining equipment, which includes a truck tire that stands 12.5 feet high and a shovel scoop and a haul truck bed, both so large that you can walk into them. You can also browse through the gift shop at the mountain base and purchase copper jewellery and other items.

The Bingham Canyon mine is an interesting example of how manmade activities can affect the environment. Aside from the gnawing out of an enormous pit in the earth, the mining activities have polluted the groundwater to such an extent that it is likely to remain unusable for a long time to come. On the plus side, the mining activities appear to have discouraged hunting in the area, and that led to a proliferation of wildlife.

Enjoyed this article? Also, check out “Potash Ponds: Where the Vibrant Blue Pools are Quite a Sight in the Red Desert“.

Previous Article
Pamukkale: The Cotton Castle in a Mess of Limestone and Healing Waters
Next Article
Hyderabad State: When Nizams Held Control of an Indian Kingdom During Its Golden Period