Betty Robinson: How a Plane Crash Survivor Became the Fastest Woman of Her Time

In July 1928, during the seventh heat of the 100m race, a 16-year-old American woman sprinted as fast as lightning and made history beating the top Canadians around her age. She became the gold medallist of the Amsterdam Summer Olympics and then won silver in 4 × 100 metres relays. Soon, tragedy struck upon this woman, nearly destroying her career. However, her story proved to be one of a revival. This is the life story of the legendary Betty Robinson: The fastest woman of her time.

From catching trains to training for the Olympics 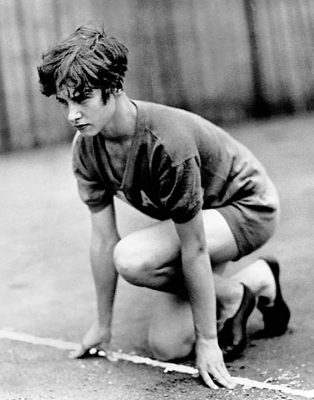 Betty Robinson (or as folks would name her ‘the Babe’) was born as Elizabeth M. Robinson on 23rd August 1911 in Robinson, Illinois. Leading a quite generic all-American lifestyle, the turning point in her life was four months before the Amsterdam Olympics when she was trying to catch her local train to the Harvey High School. The assistant track coach of her school, Carlie Prince, saw her sprinting at her top speed and catching up to the train in no time, an impossible feat in his eyes. The very next day, he tests and times her speed around the school corridor and sets up a meet. She was perplexed and confused as she was not even aware that women could race as an athlete at that time. Three weeks later, her ‘meet’ turned out to be a competition between the members of the Illinois Athletic Club.

And she blew everyone away. Untrained and unprepared, Betty finished the race to a close 2nd, almost beating Helen Filkey, the fastest runner of the Club. She was offered to join the Illinois Athletic Club, and she eagerly agreed.

The next few months revealed her to be a powerhouse of talent. She was put through a gruelling regimen to further polish her nascent skills, made to run and caught her train over three times a week. She soon ran for the Olympic trials (the very first for her club) and broke records, even ending up as the finalist in the New Jersey. She nearly beat Etla Cartwright, the top runner from California.

The accident of Betty Robinson

Betty broke local, national and global records in Chicago, including the Amateur Athletic Union, until a stroke of ill-fate hit her. On June 29th 1931, Robinson was travelling with her cousin who recently earned his new pilot license and owned a biplane and sustained a major plane crash. The plane took a major nosedive from a height of 600 meters. Her injuries were very severe, including a broken left arm, mangled left leg, and an eight-inch gash across her forehead, and she instantly slipped into coma. Rescuers thought that she was dead. It was only when the undertaker realized that she was actually alive, that she was then taken to an infirmary in Oak Forest. Betty was in the hospital for three months. A lot of press outlets falsely declared her dead, owing to her long absence and serious injuries. The Evening American wrote,

“Lying almost paralyzed on a cot, Betty Robinson today fought to win the hardest race she ever ran – a race in which the Grim Reaper was pacing her.”

It took another three months before she could get off the wheelchair and another month to get off the crutches. She was not able to walk for the next two years and missed the 1932 Summer Olympics. Recovery didn’t make things any better as her injured leg was a one-half inch shorter than the other and she could barely move her knee to crouch.

However, Betty wanted to win at least another gold medal before she finally retired. During her trials for the 1936 Summer Olympics, she only managed to get the fifth of the six-position relay team. “The doctor said if I hadn’t been in such good condition I wouldn’t have come out of it as well as I did”, quoted Betty.

On August 9th, 1936, the finalists of the 4 × 100 metres relay in the 1936 Summer Olympics (Germany), sprinted off to reach their ultimate goal, while Hitler sat on a high pavilion assured that the Germans would prove their physical superiority. The race was nearly at the end and the German team was on the verge of beating the US. An unfortunate incident, where Marie Dollinger dropped her last baton which got her disqualified. Though she broke the record of her sprinting, her mistake cost her the race.

Betty Robinson continued to make new records in the 50, 60, 70, and 100 yards, and after she retired, was inducted into the United States Track and Field Hall of Fame, and the Helms Hall of Fame, and decided to not to advertise or model. She later became an international coach, timer, traveller, motivational speaker and an advocate for female athleticism. Betty was also a spokesperson for organizations such as the Women’s Athletic Association and the Girl’s Athletic Association. She married Richard S. Schwartz in 1939 (a furniture artist) and had two kids: Richard and Jane.

We may remember her many triumphs of the past, but it is likely that she herself did not. Betty was battling cancer and Alzheimer’s disease for a very long time and eventually succumbed to it on 18th May 1999. She was 87 years old. In 1998, during Olympic memorabilia, Betty Robinson and Alfred Oerter Jr. were supposed to cut the rope together. Robinson, however, snipped the ribbon first. “I’m still the fastest”, she said- a statement that perhaps sums up her brilliant journey.