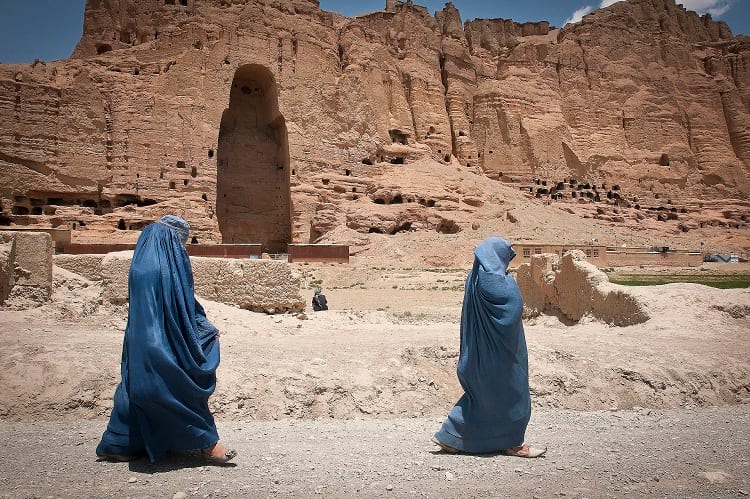 Bamiyan Buddhas: Women passing by the huge cavity where once the ancient statue of Buddha stood. (DVIDSHUB / Flickr)

Ancient relics are pieces of work that have been handed down by our predecessors for us to take great pride in what humans could once achieve without the help of modern technology. The two colossal Buddha statues in Bamiyan, Central Afghanistan were living examples of just that – very well-preserved part of history – yet a rule of extremism in one of India’s neighbouring countries bombed out a treasured heritage that once stood towering above all else. Although the statues of Buddhas at Bamiyan have been lost forever, the legacy of the gigantic statues still continues to linger on.

History of the Buddhas at Bamiyan

Considered to be the largest statues of Lord Buddha in a standing position ever to be built during that period, the massive Buddhas at Bamiyan were nothing less than a site of great archaeological importance as well as traditional value. Some two hundred and fifty kilometers north of Kabul, in the capital city of Afghanistan, is the Bamiyan valley in the Hazarajat region, where two enormous statues of Gautam Buddha were carved out in the Koh-i-Baba Mountains between the third and sixth century BCE.

Standing at an elevation of approximately eight thousand feet, these two statues were carved in the mountainside, out of which the smaller statue was completed sometime in 507 CE and the larger one in around 554 CE. The smaller one of the two statues stood at a towering height of 125 feet while the larger one measured a whopping 180 feet in height. One of the Buddhas before being destroyed. (Wikimedia Commons)

Blending together the Greco-Buddhist art form called Gandhara art; the Bamiyan statues depicted Gautam Buddha in a human form, as per the Buddhist philosophy but strongly reminded of the Classical Greek stone artwork, as was evident in the clinging and draping of monarchial robes on the two statues. Between the conquests of Alexander the Great and Islamic conquests of Asia, thousands of years ago, Greco-Buddhist art greatly flourished in the regions of modern-day India, Pakistan and Afghanistan, thus giving rise to the Gandhara art form, which was visibly the predominant style in the construction of the Bamiyan Buddhas.

Description of the Buddhas at Bamiyan

Hewn into the mountain itself, the two Buddha statues stood in a concavity with the back still attached to the wall till where the robe ended into the niche of the mountain. The legs and feet of the sculptures stood freely, as they provided for easy circumambulation around the statues to pilgrims that came visiting the Bamiyan Buddhas. The bodies of the statues were made by chiselling the sandstone of the mountain, while the details in the robes were carved using clay. Other intricacies like the facial expressions were designed using stucco (a type of plaster) and mud mixed with straw. This mixture was then painted on the statues to enhance their quality. 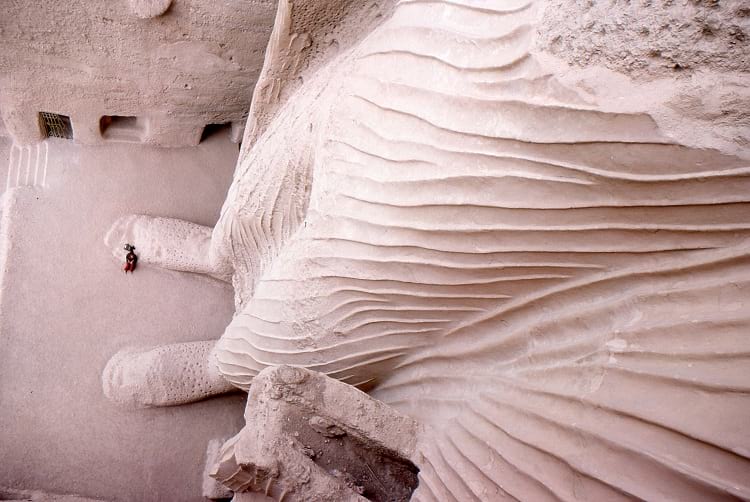 The smaller Buddha statue from the top. (Phecda109 / Wikimedia Commons)

The smaller statue, which was colloquially called Shamama in Afghanistan, was said to be multi-coloured, while the larger one, known locally as Salsal, was painted a bright red, particularly in hues of carmine. Pilgrims’ records also suggest that the smaller statue was decorated with gemstones and also had a plating of bronze over it. While the faces of the two statues were said to be made out of wooden or clay casts of that time, the arms and head of the huge stone figures were supported by wooden scaffoldings. A lot of wooden pegs were also used to hold the stucco together in place, which was visible in the form of multiple holes that were dug into the stone statues at different places. The bright colours of the giant figures faded with time and nothing much remained by the turn of the new millennium. Also, minor acts of vandalism over the years and continuous erosion over the centuries rendered the appearance of the Bamiyan Buddhas unsettling.

Destruction of the Bamiyan Buddhas in history

While the military organization of Taliban in Afghanistan were primarily responsible for the destruction of the huge stone statues of Bamiyan, several rulers preceding them had made futile attempts to bring down the massive stone Buddha figures. Genghis Khan invaded the Bamiyan valley back in the year 1221 but he did not bring any harm to the revered Buddha statues. Even the Mughal rulers, who made their way into India through the Bamiyan valley, paid little heed to the giant stone figures, except Aurangzeb, who is said to have used artillery to try to destroy the magnificent idols. Persian ruler Nader Afshar, too, tried his best to blow up the enormous statues but failed miserably. During the Shia Rebellion in the region in 1847, Afghani Emperor Abdur Rahman Khan ordered the destruction of the face of the larger stone Buddha idol and succeeded in the effort, although the rest of the huge statue remained as was.

Despite idolatry strictly not being a part of Islamic teachings, the Muslim country of Afghanistan never planned to destroy the two gigantic statues, stating that there was no form of worship at the site. However, in the March of year 2001, when the radical Islamic military outfit of Taliban took over the country, the militiamen active in Afghanistan and funded by the Al Qaeda, another multi-national Islamic organization, brought down the two idols by detonating bombs at their base and shoulders, ripping apart the glorious statues that once stood the test of time. This act not only received negative criticism from across the globe, but native Afghanis also mourned the felling of the two monumental statues that formed a major part of their lives, apart from also bringing in revenue as priceless heritage treasures.

In spite of multiple international pleas to save the timeless pieces of architecture, and several appeals from UNESCO, the Taliban did not budge. Instead, they set heavy explosives and launched rockets to bring down the Bamiyan Buddhas, which were listed in UNESCO’s World Heritage Sites.

Restoration efforts of the Bamiyan Buddha

Although nothing much could be done out of the rubble that was left after Taliban bombed the statues, a lot of individuals as well as different organizations, along with the Afghanistan government (post-Taliban rule) and UNESCO, came forward to pledge the restoration of the Buddha statues. It was hoped that with international funding and recovery of the fragments, partial anastylosis (procedure of rebuilding a monument from the original fallen parts) of the Bamiyan Buddhas was possible. But in 2006, after scaffoldings were constructed on the site where the smaller statue stood, serious safety issues cropped up and the plan was put in the backburner again. With little hope left and many problems that kept plaguing the restoration process, it was finally decided that the world’s wonders would return to their niches in the mountain, though only in the form of a 3D light projection.

Further Discoveries at the heritage site

After the world’s tallest Buddha statues were turned to dust, a team of international researchers and archaeologists returned to the site to dig deeper into the area. Several caves were found in the mountain range, which upon analyzing further, opened up a treasure trove. When Buddhism was at its peak in the region, many monks found shelter inside the small, domed caves alongside the foot of the mountain range, in which the statues stood tall. Many brightly-coloured, oil-painted frescos and ceiling art, which illustrated the teachings of life of Gautam Buddha, were discovered inside the caves, which is said to be the work of the hermits and monks that resided inside the caves. Apart from the two colossal structures of the Buddha, several smaller statues of the lord, in a seated position were also found carved into the cliffs nearby. Oil paintings dating back between the 5th and 9th centuries were also discovered inside. Apart from these paintings, which were made using natural pigments, coins and ceramics from that era were also unearthed during the excavation. But the surprising find that the archaeologists came across was a damaged sculpture of Gautam Buddha in a reclining position, which was almost 62 feet in length. Although the sculpture was badly damaged, it raised hopes for many other such enormous finds.

But even as the treasures of the lost world came to light from the caves in the Bamiyan valley, the gigantic Buddha statues, which the world once took great pride in, had to quietly settle in the dark forever.

Enjoyed this article? Also, check out “Naqsh-e Rustam: The Incredible Tombs and Rockface Reliefs of the Sassanian Kings“.