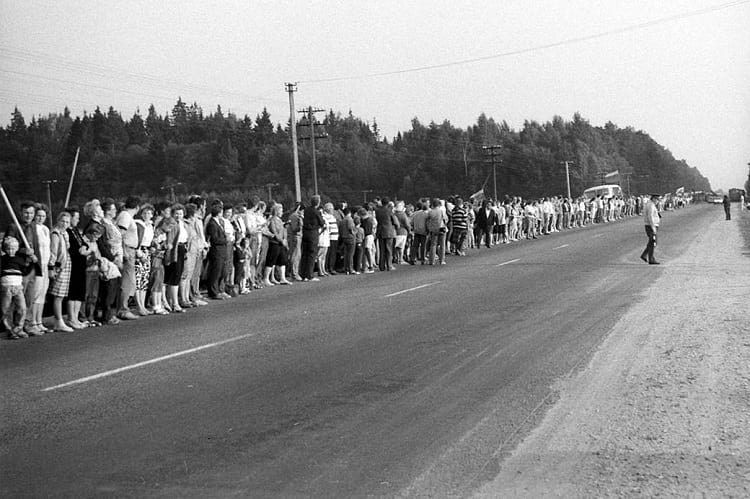 Freedom is a relative term. For some it could mean release from oppression; for some it could mean to live their life on their own terms or free will. For many others it could mean freedom from the laws laid down by their country. The latter is precisely the term that led three Baltic countries, namely Estonia, Latvia and Lithuania, which were occupied by the Soviet Union, to rise against the rule and stand as one.

On August 23, 1939, the Soviet Union entered into a secret, non-aggression pact with Nazi-led Germany. Also known as the Molotov-Ribbentrop Pact, it was signed in Moscow between Foreign Affairs Ministers Vyacheslav Molotov and Joachim von Ribbentrop of the Soviet Union and Nazi-Germany respectively.

During World War II, as per the highly secret Pact, countries in Eastern and Northern Europe were to be divided between the Soviet Union and Nazi-Germany. Both the powerful nations hoped for territorial and political rearrangements of the smaller countries.

The Soviets began occupying areas that lay close to the Baltic Sea and kept denying the protocols of the existing secret Pact. Till the mid-80s, the Soviet Union was in denial of the covert Nazi-Soviet Pact and continued to occupy the three Baltic States, asserting that they had joined voluntarily.

On the 50th anniversary of the Pact, on August 23, 1989, the three Baltic nations decided to call it quits. Having had enough of the secrecy and the Soviet occupation of their areas, people of Latvia, Estonia and Lithuania demanded the Soviet Union to go public and come clean on the confidentiality of the Molotov-Ribbentrop Treaty.

They also demanded restitution and independence from the Soviet rule. And so, at around 7 p.m. local time, as a mark of protest, as many as two million people from Estonia, Latvia and Lithuania joined hands together to form a human chain that spanned approximately 670 kilometers.

The citizens of the three Balkan nations came together for a peaceful political demonstration that began in Tallinn – the capital city of Estonia – and made their way through Riga in Latvia to Vilnius, the capital of Lithuania.

Known as The Baltic Way or The Chain of Freedom, the peaceful protest was a unique method of expressing public dissent. It united people from three different nations that wanted freedom from one Soviet rule.

Organised by the national movements of the three countries – Latvian Popular Front of Latvia, Rahvarinne of Estonia and the Sajudis of Lithuania – the living chain was a message to the USSR that its five-decade-long illegal occupation in their nations was about to come to an end.

Not only men but women and children, too, from every nook and cranny of the three countries made their way towards the epicenter of the protest in opposition of the Soviet annexure of their states. Exiled Latvians, Estonians and Lithuanians in the cities of Berlin, Melbourne, Stockholm, Toronto, Leningrad and Moscow also stood in solidarity with the two million people that had formed a chain in the capital cities of the three Baltic countries.

The peaceful display of disagreement by such a large number of people from different countries made international news and also gave rise to the term “Singing Revolution”. It was where people of the three Baltic countries (started by the Estonians) held hands and sang patriotic songs all night long in objection.

This unlikely unity pieced together a chain of events that led to the total independence of the three Baltic States in the year 1991. The Chain of Freedom later also helped in Moscow owning up their crimes and rendering the Nazi-Soviet Pact invalid. This helped in freeing the three countries from the Soviet rule two years later. The Baltic Way also served as a precursor to the fall of the Berlin Wall on November 9, 1989, uniting Germany as one. Aerial photo of the Baltic chain. (National Museum of Lithuania)

Today, one does not get to see such peace and harmony among different nations of the world that come together and stand up for a common cause. The Baltic Way was one such rare example of non-violent political demonstration (another oddity in today’s times), which gave the people of Estonia, Latvia and Lithuania the freedom they deserved from the Communist Soviet Union.