Ayahs’ Home In London: Where Abandoned Indian Nannies Were Sent to Live Out the Rest of Their Days We heard of a home for the aged or even orphans. But, a home for the ayahs’ of India and that too in London! 194 years back a group of English women formed a committee of women and established a shelter in London. They named it Ayahs’ Home. The basic idea was to extend shelter to the thousands of stranded ayahs from India in England.

Mrs Rogers was believed to have been behind the establishment of the Ayahs’ Home sometime in 1825 in Aldgate, London. This was two years before the beginning of the Victorian Era.

It means, even before the Victorian Era, British merchants, traders and the East India Company officials used to travel to India along with their families. These British families used to have luxurious lives. They were hiring Indian women or girls to care for their children as ayahs, nannies or nursemaids. When Queen Victoria ascended to the British throne, ayahs became a common feature in the English households in India. 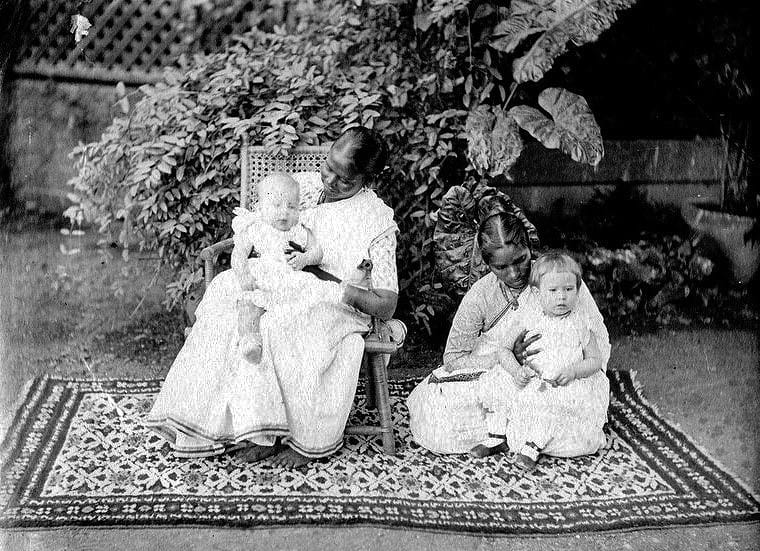 After the 1857 sepoy mutiny, came the era of the British civil servants and their wives. In those days, these British wives were addressed as memsahibs. The term ‘mem’ derived from ma’am. The term ‘sahib’ refers to the male form of Sir.

Memsahibs were those who were born in Britain and then shifted to India after marriage. After they had children in India, these memsahibs needed help in the household work. They also needed ayahs to care for their newborn children.

Most of the time, the ayahs were older. At times, widowed. However, they were experienced as they already had children. They knew how to deal with young British kids.

Also, whenever the British families returned to England, these ayahs were picturesque and a common sight on board the ships. Their only job was to entertain and care for their charges during the long and arduous sea journeys.

The era of the travelling ayahs

The ayahs took up these sea journeys in spite of the societal stigma against those travelling overseas. As they were poor and nothing else to lose, they endured the stigma.

So, why did Indian ayahs agree to travel at all? Perhaps, one reason could have been an economic necessity. Another reason may have been the ayah’s devotion to a particular family or a child. Perhaps, some of the ayahs had a sense of adventure in them. Or, maybe even a desire to visit and see Britain.

It is interesting to note that one travelling ayah named Mrs Antony Pareira is believed to have travelled to Britain at least 54 times.

Before Queen Victoria’s reign, ship travel used to take four to six months to Britain from India. Later from 1869 onwards, however, the travel time dropped to three weeks as ships could pass through the Suez Canal.

During these journeys, some British families used to take their own ayahs along with them. While others used to hire ayahs especially for the ship journeys. Therefore, they expected the ayahs to have good sea legs and be trustworthy. Thus began the era of the travelling ayahs.

After the three-week sailing, when the ships docked in Britain, some British families took their ayahs along with them on their visits. Some other ayahs were sent to the Ayahs’ Home. There, these ayahs waited for their turn to be taken back home by another British family.

However, there were several instances where British families used to either abandon or terminate the services of an ayah after returning to England. In quite a few instances, these hapless ayahs were stranded in a strange land without money for a passage back to India.

In 1908, there was one instance when a British employer abandoned an ayah. He had left her at London’s King’s Cross Station with just one Pound Sterling note in her hand.

According to the Ayahs’ Home matron of that time, Mrs Dunn, a British woman brought the ayah from Bombay to England. She released the ayah to Thomas Cook and Son so that the ayah’s employment could be transferred.

The hapless ayah then landed at the office of the Thomas Cook, who sent her to the Ayahs’ Home. On coming to know of this case, Mrs Dunn had succeeded in obtaining compensation from the India Office for the ayah.

The case of ayah Minnie Green

Earlier in September 1892, an ayah from Bangalore named Minnie Green took her British employer and his wife to a British court and won. Minnie Green was her anglicized. In those days, it was the habit of the British to anglicize the names of their servants.

Her journey from Bangalore to London was a traumatic one. During the journey, Minnie Green’s employers were violent and disrespectful towards her, according to the Lloyds Weekly Newspaper. Her employers, Harold and Grace Denton, were coffee planters in India at that time.

By and large, those ayahs whose services were terminated were because they had no formal contract of employment.

Role of British women in extending shelter to ayahs

This is where one should appreciate the role of British women like Mrs Rogers who took it upon themselves to extend shelter to ayahs stranded in England. The Ayahs’ Home also helped the stranded ayahs in finding an alternative employer to return home.

“Symbol of the British Empire”

The Ayahs’ Home thus acted as a transit home as well as an employment agency with the assistance of the India Office in London. It was also considered to be the “Symbol of the British Empire” and a home away from home.

Usually, though, a British employer used to provide a return ticket to the ayah even before reaching England. The employer generally used to surrender the return ticket of the ayah to the Home.

In 1900, the London City Mission (LCM) took charge of the management of the Home with the active support of the Christian Missionaries. And naturally, the Home moved from Aldgate to King Edward’s Road in Hackney, London. 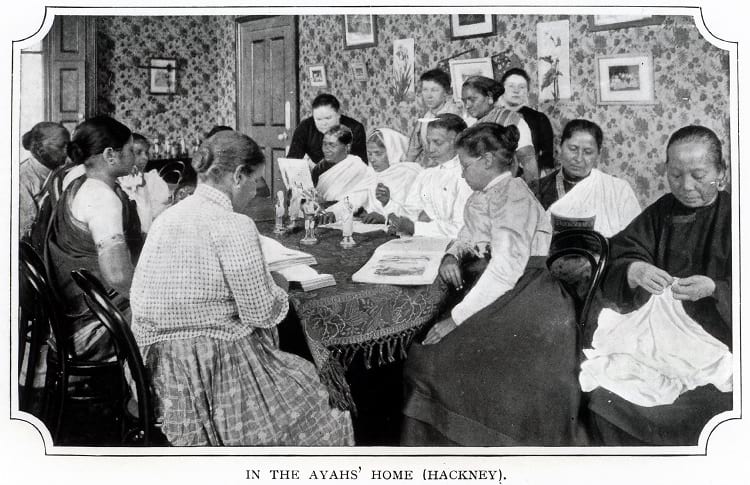 Later in 1921, the Home shifted into more spacious premises on the same road in London. Lady Chelmsford, the wife of the former Viceroy of India had inaugurated the Home at the bigger premises.

According to a research paper titled “Ayahs’ Home”, there were instances when missionaries made attempts to convert the ayahs to Christianity. In this connection, a committee of the LCM frequently held “Foreigners’ Fetes” for the benefit of the transiting ayahs.

On average, the Ayahs’ Home used to take care of 90 to 140 ayahs a year. This information was conveyed to the India Office by a matron named Mrs Dunn in 1910.

Interestingly, some of the transit residents of the Ayahs’ Home included nurse maids from British-dominant countries like China. They too were brought to Britain for similar reasons, i.e. child care during sea journey. They too needed assistance in returning to their homeland.

Generally, the travelling season was between March and November. During this season, the Home was bursting to the seams. However, between November and March, the Home was more or less empty. Also, there were not many ayahs at the Home during World War I as women were denied permission to travel by sea.

These “Madrassi ayahs” too found shelter at the Ayahs’ Home like any other ayah. Though there are hardly any testimonies from the ayahs, life at the Home happened to be a mix of eastern and western traditions.

Indian food was served and the ayahs were passing their time by either playing pachis or were busy with their embroidery work. Some of them even went on a sightseeing tour around London.

In addition to earning money through the sale of the return ticket of an ayah to a new employer, the Ayahs’ Home also earned money through public donations and fundraising events. Between November and March, the Home was almost empty and with no funds to keep it alive. During such hard times, the Home’s administrator used to apply to the India Office in London for financial help.

From such busy times of the 1800s and the 1900s, very few know as to what happened to the Ayahs’ Home after 1947. Very few know about the Home today even though it still stands in the heart of London.

The Home’s building in Hackney today is just another number on the street.

Enjoyed this article? Also, check out “The History of Breast Tax and the Revolt of Low Cast Women in 19th Century Travancore“.

Previous Article
Pitcairn Island: Unsettling History of the Least Populated Nation on Earth
Next Article
DC Towers: The Project That Revolutionised the Cityscape Of Vienna