Surviving a plane crash may seem like a lucky escape. But not crash-landing deep into the South American Andes, the longest mountain range on Earth. This was the story on October 13th, 1972, when a small aircraft went down between the border of Chile and Argentina. It left 27 Uruguayan survivors who found no civilization in sight, periods of up to fourteen hours of darkness and temperatures as low as -35 ºF.

An already hopeless situation, an avalanche would soon worsen matters and before long they had to resort to cannibalism. It would not be until three days before Christmas when the aircraft wreckage was finally found, but… how could it possibly contain any survivors?

The reason for the journey was a rugby match. A small Fairchild plane was chartered from Uruguay to Chile; onboard were 45 players and supporters. Unknown was the poor safety records of the company and when the pilots believed they had already passed the Andes, disaster struck.

The passengers felt something was wrong as they could see the peaks of the mountains very close. After some strong turbulence, one of the wings clipped a peak creating an explosion. The plane plummeted dramatically and sent the cabin tobogganing down a mountain. When the survivors came to a mental discernment, they saw a gigantic landscape wrapped in a ferocious blizzard. Some commented that they felt like insects among it.

Survival after the crash

A detailed account of the experience comes from Roberto Canessa, at the time a 19-year-old medical student. He quotes himself as being dropped from a life of privilege to absolute chaos, something like a scene from a horror movie. The corpses of many of the 18 victims – families and friends included – strewn around them.

They had limited food, drink, and clothes, while they had to use the broken fuselage as cover from the elements. Another student, Fernando Parrado gives his version of events. This was after being presumed dead for three days. Doctors later said that because he was left outside the plane, the icy temperatures preserved his brain from further injury. These two would become the main protagonists within the group. (Especially after Rugby captain Marcelo Pérez passed away).

Instinctively they tried to help as many people as possible. Using tactics which included melting snow through metal sheets into bottles, rationing food and organizing hikes around the mountain. They found as many extra materials as possible to shield from the cold and used others to form a massive cross and SOS, hoping to be spotted from above. This was impossible mainly due to the aircraft exterior being white, even with a commercial flight path above them. Each passing plane teased them more than the last.

Nine days after the crash, things would get even more extreme. More people began to die due to the cold and lack of food. Hunger pangs began to dominate. Eating parts of the aircraft such as the material in the seats did not sustain them. They would have to think of an inhuman thought. But after what felt so long outside of humanity, they were no-one longer be thinking like humans.

Everyone started probing the same idea once their food sources ran out but they were unable to follow through. So they turned to God. A devout religious group of Roman Catholics asked God for guidance. One of the members Javier recited a New Testament verse, relating to Holy Communion:

“He who eats of my flesh and drinks of my blood will have eternal life. Take and eat, this is my body.”

The deciding factor for many including Nando Parrado was that they would have offered themselves if the shoe was on the other foot. Nando stated that it should not be called cannibalism but rather Anthropophagy – the eating of flesh – as they were forced to do it. Four of the men used razor blades and broken glass to rip open the skin. They would survive for longer solely for that reason. Apart from one man who was too repulsed to continue.

Six days later, when the Uruguayans thought it couldn’t get any worse a strange noise came from above. An avalanche rocked the mountain and swept through the group to create an even more desperate situation. More died and the remaining survivors were stuck in the buried cabin for three days.

On another expedition, Robert found the tail of the plane which had more clothes, drink, some sugar and a camera. Robert found his luggage which smell must have been the most bittersweet, nostalgic feeling. Perhaps it gave him more inspiration to try and see home again. Back at the aircraft, news came from the outside world. Their transistor radio gave the information that the rescue search had been called off. At this stage, they started going on deeper missions to try and find help however the air was so thin and the snow so deep that it was impossible to get far.

They were running out of flesh and time. Roberto, Nando and one other made the decision to find help. Nando’s main reason was that two of the untouched dead bodies left were of his mother and sister – who had both died on impact. As Christmas approached Nando Parrado and Roberto Canessa would be the two to venture out and never return until they found help, or die trying.

The last words of the dying co-pilot made them believe they were closer to Chile. They would only have to climb one peak before they reached green pastures.  In actual fact, they were on the other side, in Argentina. So it would take ten days of intense travelling: over 15 KM, climbing peaks as much as 15,000 feet and in snowshoes made from plane seats as well as sleeping bags made from cabin insulation.

After countless hours of hardship, they started to see colours; some grass and flowing rivers. Eventually, they found a figure in the distance. An Arriero – transporters who ride mules – and told him their story. They were saved! The Arriero rode ten hours to the nearest town and organized helicopters to ascend the Andes. Because of the weather, it would take two trips to get everyone home. Rescue teams stayed with the second group. Roberto and Parrado after being discovered in Chile. (Hector Maffuche / Wikimedia Commons)

After spending 72 days on the mountain in total, 16 survived. It became and remains one of the most famous and inspirational survival stories in human history. Those who left the mountain all led healthy lives after the torment and met every year on December 22nd to honour the dead and celebrate life.

Roberto Canessa and Nando Parrado – the ones who showed the most courage of all return to the site every year. There is a grave marked there for the victims including Nando’s mother and sister, he also named the highest peak after his father – Mount Seler. Both men return to the point where they were rescued also, keeping in touch with their saviour – the Arriero – Sergio Catalan, to reminisce about a truly heroic story. 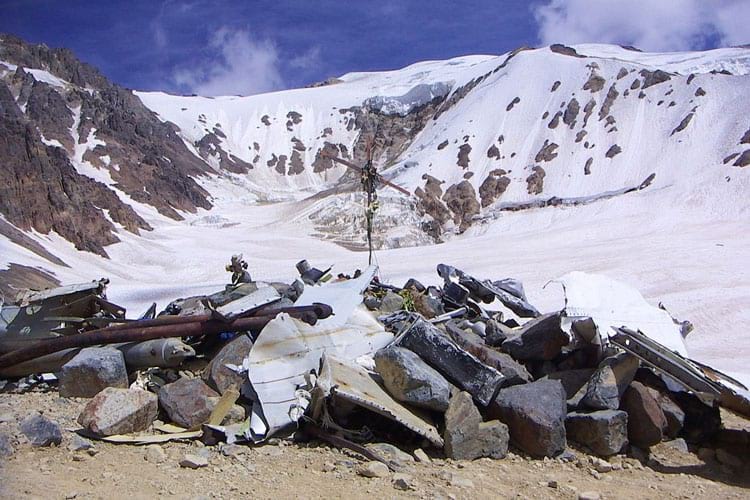 Enjoyed this article? Also, check out “A Tale of Resilience: Poon Lim, the Chinese Sailor who Survived 133 Days Castaway in the Atlantic Ocean“.

Recommended Reads:
1. Miracle in the Andes: 72 Days on the Mountain My Long Trek Home | By Nando Parrado
2. I Had to Survive: How a Plane Crash in the Andes Inspired My Calling to Save Lives | By Dr. Roberto Canessa & Pablo Vierci
3. Alive: The Story of the Andes Survivors | By Piers Paul Read

Previous Article
The Time When Men Fought Bears
Next Article
Dasht-e Lut: A Martian Terrain and the Hottest Place on Earth