Al ’Ula Town: A Once-Flourishing Oasis That Now Lies in Dust, Hidden from the World Nestled quietly in the western part of the Kingdom of Saudi Arabia, the ruins of Al ’Ula seem to come straight out of an ancient civilization. With mud, brick and stone houses, closely arranged together against the blue skies, flanked by mountains on one side and effects of modernisation on the other, Al ’Ula is one lost town that the world has conveniently forgotten. Located approximately 400 kilometres north of the holy city of Medina, the town of Al ’Ula was once a flourishing city that presented a perfect picture of fine Arab architecture. Founded in the sixth century BC, the two-thousand-year-old town is located on the historic Incense Route, which facilitated trade of spices, fragrances, silk and other items of luxury between Saudi Arabia, India, Egypt and the Mediterranean regions.

History of the town of Al ’Ula

An oasis right in the middle of the desert, Al ’Ula had plenty of water and arable land back in time, where humans first started to settle down during the Bronze Age. The Arabian Peninsula is close to a million years old and with Al ’Ula’s regular supply of water, human habitation may have been constant in the valley through the eras. Ancient human carvings and murals dating back to the Bronze Age that flourished in the third and second millennia BCE prove that the old town existed when nothing else did. But unlike other historical sites including Rajajil and Shuwaymis, which were abandoned immediately after continuous periods of draughts set in, Al ’Ula managed to thrive in the harshest of temperatures. A regular supply of underground water system helped the population in the city to prosper for a very long time until the last family is said to have moved out of the town in the year 1983. The religious significance of Al ’Ula

In the year 630 CE, when rumours spread across the world that there would be a Byzantine invasion (also known as the spread of the Roman Empire) in Arabia, the Islamic prophet Mohammed led a military campaign against the western rule. With as many as thirty thousand forces, he travelled towards modern-day Tabuk in northwest Saudi Arabia to face the Roman army. He, along with his forces, passed through the old town of Al ’Ula, where they are said to have halted for three full days and upon seeing no sign of the approaching Roman army, retreated to Medina, thus giving the city a religious connotation.

Cashing in on from the water supply of the oasis, the city quickly became a commercial centre and merchants, travellers and caravans started halting for trade in the town. The valley of Al ’Ula, also mentioned as Wadi Al-Qura in Islamic texts, soon became a place of Muslim occupation. On their route to the holy city of Mecca from the Syrian capital of Damascus, pilgrims stopped by in the town of Al ’Ula to buy provisions for their long journey ahead. Later, some of them also started leaving behind their possessions at Al ’Ula, which they would retrieve once they got back. Syrian businessmen are also said to have travelled all the way from their home town to Wadi Al-Qura to sell their supplies to pilgrims, en route Mecca. 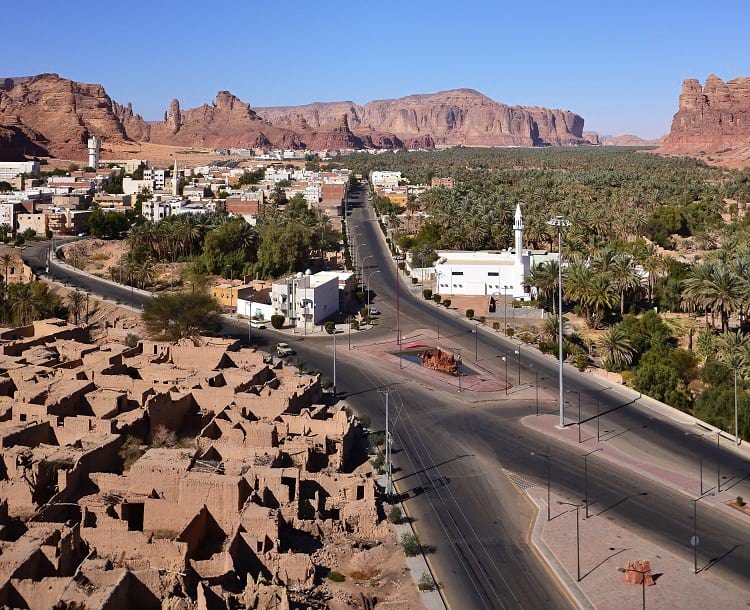 Life in Al ’Ula back in time

A fortified area, Al ’Ula is still packed with mud and stone houses and was once a capital of the Lihyan Kingdom that ruled over Arabia for a very long time. Apart from the ancient kingdom of Lihyan, the Arab Nabataeans and more recently, the Ottoman Turks ruled over the old city, thus marking its significance in the course of human history. Greeks and Romans, too, are said to have passed through this old town, leaving their mark on people’s lifestyle, as also on the few odd buildings that still stand tall, while on their way to conquer the world. Dotted with mud houses, the narrow alleyways of Al ’Ula always bustled with people and a whole lot of colours back in the day. The houses were tightly packed like mazes in a honeycomb. Farmers sold their produce on donkey backs in the small plazas and life in the old town was always busy.

With more and more civilizations coming in, a lot changed in Al ’Ula over the centuries. The Ottomans built a railway network, linking it to Damascus and more recently, town centres were established during the turn of the modern century. Slowly, people started deserting the old by lanes of Al ’Ula for a better life in the city and the town of Al ’Ula lay all alone in shambles with nothing but muddy houses that could blow away with a strong gust of wind and some stone structures that speak of the ancient people’s architectural expertise.

As human settlements came and went in the old town of Al ’Ula, one that left an indelible mark, bringing fame to the Islamic country is Madain Saleh, which is also Saudi Arabia’s first ever UNESCO World Heritage Site (named in 2008). Also known as Al-Hijr, it is spread across a sprawling 52 hectare of land and is made up of well-conserved, colossal tombs that are more than a hundred and twenty in number. The intricate and complex facades cut out of solid rocks belonging to the Nabataean period, make it a place of historical, religious, cultural as well as archaeological importance. The government of Saudi Arabia has initiated to undertake efforts to bring the old town back to life to boost tourism in the region; but the ghost town of Al ’Ula will remain in secrecy, waiting till the dust finally lifts off from a bygone era, thousands of years old.

Previous Article
Body Worlds Exhibits by Gunther von Hagens: An Exhibition for the Better Understanding of the Human Anatomy
Next Article
Dancing Plague of 1518: When People Nearly Danced to Their Deaths