IN ALMOST EVERY religion, there has been some sort of deviancy in beliefs that render these sects of believers as outcasts by society. One such religious sect is the Aghori, who despite some very strange and radical beliefs, fall under the wide umbrella of Hinduism. Although they are a part of the Hindu culture, they have been denounced by every other sect of the Hindu religion. Society has never accepted their extremist beliefs, especially considering that a key part of their religious beliefs is to consume human flesh. What is bizarre is that it is not just fresh human flesh they consume, but they are also known to eat cadavers that would be dug up from graves. They are said to mostly live near Varanasi and are often found near the banks of the Ganges River. Although they have a bizarre lifestyle, there is more to the Aghori sect than just cannibalism.

There are some extreme rituals that are followed by the nomadic tribe of India, the Aghoris. These including cannibalism, and adorning their body with jewellery made of human bones and skulls- as ornamentation as well as certain ceremonial purposes. The members of this cult are devout followers of Lord Shiva, who has been depicted as the God of Destruction in the religious texts of Hinduism. Since a lot of their rituals and spiritual beliefs are centered on death, they are often found living near burial grounds or cremation grounds. This leads them to have direct access to the corpses, bones and skulls that they use for their practices. The Aghori Tribe is believed to have certain capabilities that allow them to manipulate people’s minds and cure them of a variety of illnesses, both mental and physical. Some believe that the severe penance of the Aghoris gives them the ability to see into the future.

One of their deviant practices entails that during the course of their rituals while chanting mantras, they offer alcohol and cannabis to please their violent and unrestrained deity, Lord Shiva. Another very prominent practice adopted by the Aghoris is to obtain flesh from corpses floating in the Ganges River.

In fact, a lot of people submerge the bodies of their family members inside the water completely so that they can avoid being eaten by the Aghori.

This does not always work since the Aghoris are determined and very often dive deep and scoop the body out of the water in order to complete their rituals. After having successfully obtained a corpse, they consume it under the auspicious light of the new moon and offer their prayers to Lord Shiva. While they follow Lord Shiva, there is another goddess that they offer their prayers to. Goddess Kali, the wild and primal consort of Lord Shiva, according to them demands only three things from the Aghori- meat, alcohol and sex. These demands fall right in line with their usual practices.

Before consuming the cadaver, to please the Goddess, the Aghori indulge in the bizarre and shocking ritual of performing intercourse with the deceased human.

However, this only occurs once they find a suitable corpse that they believe holds the potential to fulfil the Goddess.

The Aghori are very prominent in their appearance-with the ashes of the dead smeared across their entire body and dressed in black loincloths or robes. Living a more ‘real’ life, free from worldly attachments and conventions, is what they believe in and preach the same. They believe that there should be no taboos or restrictions imposed on people; there should be no limitations on free will and personal liberty. In fact, swearing and cussing are considered quite acceptable and natural within the cult, since they speak whatever comes to their mind.

An Aghori sadhu with ash smeared all over the body. (Bhutri / Wikimedia Commons)

Becoming an Aghori is not easy since there should be a guru who teaches his pupil perseverance and penance (Tapasya) for twelve long years. The attainment of ‘moksha’, or enlightenment, is the highest achievement within the C, and the Aghori perform rigorous penance, accompanied with meditation, on top of a human corpse.

Although the rituals performed by the Aghori tribe is highly controversial, there have been several instances where people have confirmed that they are, in fact, very benevolent as human beings. Not only do they honor their practice with a very rigid belief system and code of conduct, but they also honor the dead with equal importance.

Given their unrestrained lifestyle and taboo practices of drug use, necrophilia, and cannibalism, it is but natural that mainstream society steers clear of them. However, based on field reports, not only has the kindness and benevolent nature of the Aghoris been reiterated time and again, they also found out that despite the practice of cannibalism, their belief does not preach hate. 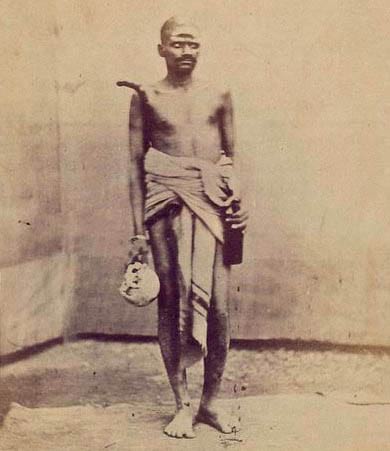 An Aghori sadhu with a human skull, c. 1875. (Wikimedia Commons)

The very famous saying, “Beauty lies in the eye of the beholder”, holds very true for the Aghori cult. Their entire belief is based on finding positivity and light in the darkest of places. Disgust, fear, anger and other such negative emotions hold no place in their spectrum of belief. According to them, all humans are equal and deserve unconditional love and respect.

Around the world, cannabis has been considered a recreational drug that gives people a sense of pleasure and helps them relax.

According to their religious beliefs, the Aghori are supposed to consume marijuana on the pretext that it would appease the gods.

Additionally, they have a staunch belief that it helps them concentrate on mantras and perform rigorous yoga in order to honor Lord Shiva. The sect vehemently denies consuming it for mere pleasure, and they assert that it is consumed by them in order to live in the culture of their lord and seek enlightenment in the way that is prescribed to them.

While drug abuse is conventionally frowned upon, and even illegal in most countries—it has never been a problem for the Aghori. Despite their heavy consumption of marijuana, the Aghori exhibit eerie sobriety and calmness. Not only do they never indulge in violence, they never distribute the hashish or weed they consume outside their own tribe.

Enjoyed this article? Also, check out “The Disappearance of Michael Rockefeller: One of the Most Enduring Unsolved Modern Mysteries“.